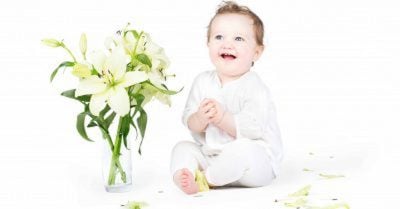 Lily is a popular girls’ name with connotations of femininity and nature. It’s not hard to see why you have chosen this sweet-sounding name for your baby girl.

The name is associated with innocence and beauty, making it a perfect name for your baby daughter. Middle names for Lily need to be special to balance this lovely name.

The name is derived from the iconic and fragrant flower of the same name.

The lily flower is thought to represent purity, passion and rebirth. It is often associated with fertility and new life.

Lilies are durable flowers that everyone loves. The ancient Egyptians believed lilies to be sacred flowers, and the Romans used them to fill their pillows.

Your child’s name is one of the first things you will give her, so it’s no wonder you want to get it right.

Choosing a name for your baby can feel like a lot of pressure, but try not to let the decision overwhelm you.

The name Lily is not difficult to spell or pronounce, and so your child won’t have to worry about people mispronouncing or misspelling her name.

Keep reading to see our list of 100 middle names for Lily.

Is the name Lily popular?

The name Lily enjoyed a resurgence of interest at the end of the 20th century. It has grown in popularity in recent years – particularly in English-speaking countries.

Lily is among the most popular girls names in the UK and the US.

If you’re worried there might be other Lilys in your daughter’s class at school, you’ll need to figure out how popular the name is in your neighbourhood.

Although it is a popular name in a lot of English-speaking countries, that doesn’t necessarily mean it’s a common name; your Lily might be the only one in her class.

Are You Getting BellyBelly’s Baby Week By Week Emails? We think they’re the best on the internet! Click to get the FREE weekly updates our fans are RAVING about.

What names can Lily be short for?

The name Lily can be short for a variety of names.

Lily was once common as a nickname, or a shorter version, for longer names such as Lillian, Liliana and Lilith.

It’s now popular as a complete first name. The name Lily has stood the test of time, much like the flower which has been popular throughout human history.

Although Lily is the traditional and most popular spelling of the name, other spellings are creeping into use.

Lilly and Lillie are alternative spellings of this classic name. Lilia is another gorgeous-sounding variation of Lily.

Many of the middle names for Lily, in the list below, will also complement Lilia, so be sure to keep reading.

What are good middle names for Lily?

If you’re looking for good middle names for Lily, there are so many to choose.

Lily is a great name because it is versatile and sounds great matched with lots of other names.

You can choose something long and fancy, or something short and cute, and Lily will sound equally beautiful with both.

In truth, the best middle names for Lily are those you love the most.

Although many people go for short middle names for Lily such as Rose and May, there are no hard and fast rules when it comes to choosing a middle name for your child.

You can also choose longer names, such as Josephine and Francesca.

The most important thing is to choose a name you and your partner love.

How to choose middle names for Lily

As you’ll see from the extensive list of middle names for Lily, below, there are almost too many great options to choose from.

Unlike some trickier names, Lily goes really well with a whole array of names so you’ll easily find a middle name you really love.

To choose good middle names for Lily, you should look again at your list of first names.

Lily made it to the top of your list, but are there any other names that inspired you, and you’d love to include?

Work back through your family tree; are there any family names that would work as a middle name?

Perhaps there are musicians or writers whose work is important to you: could you use on of their names?

How about book or film characters you admire?

Remember, middle names don’t need a story behind them; it’s ok to pick a name simply because you love it.

Once you’ve found a list of middle names for Lily you and your partner are happy with, you need to put them to the test.

Think carefully about your future child’s initials and potential nicknames. You don’t want to give her a name you’ll regret!

Try saying the names aloud so you can hear what your child’s name will sound like.

You might be surprised how many names don’t pass this test. They might sound ok in your head but simply don’t work when you try saying them out loud.

What are pretty middle names for Lily?

Shorter modern-sounding names like Belle and Paige are cute middle names for Lily.

Longer or more traditional names are often described as pretty. Persephone and Esmerelda are pretty middle names for Lily.

If you’re looking for sibling names that go with Lily, there are lots of great options to choose from. The name Lily rolls off the tongue and is easy to say so will suit a variety of sibling names.

You might want to avoid rhyming names, such as Lily and Billy, but apart from that, there aren’t many restrictions with a timeless name like Lily.

Read on to see our 100 sweet middle names for Lily.

Is Milo Safe During Pregnancy – All Your Questions Answered

Is Milo Safe During Pregnancy - All Your Questions Answered