Mothers Who Co-Sleep Longer Might Feel More Depressed And Judged 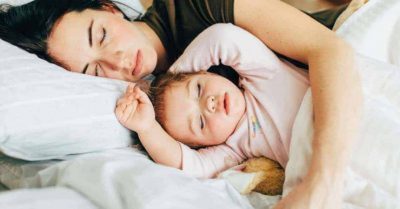 A study recently released by Penn State University (USA) suggests mothers who co-sleep with their babies past six months of age are more likely to feel depressed or judged.

Researchers believe this is linked to current parenting trends and popular advice telling mothers not to sleep with their babies.

This link is crucial.

Mothers Who Co-Sleep Longer Might Feel More Depressed And Judged

Douglas Teti, Department Head and Professor of Human Development and Family Studies, emphasises: “In other parts of the world, co-sleeping is considered normal, while here in the US, it tends to be frowned upon. Co-sleeping, as long as it’s done safely, is fine as long as both parents are on board with it”.

What Did The Study Find?

The study analysed the sleeping habits of 103 mothers and their babies in their first year of life.

It was found while 73% of families co-slept (room-shared) at the one month point, this number dropped to 50% by three months and down to just 25% by six months.

Teti believes this can be attributed to concerns about Sudden Infant Death Syndrome (SIDS), as well as parents wanting their babies to learn how to self soothe and fall asleep on their own.

This is of great concern for two key reasons:

From these statistics, it would appear 75% of parents were inadvertently increasing the risk of SIDS as well as jeopardising the breastfeeding relationship.

Researchers also found the 25% of mothers whom they termed ‘persistent co-sleepers’ showed high levels of feeling depressed. In fact, these mothers reported being 76% more depressed than mothers who had moved their infants to another room.

Teti explains: “We definitely saw that the persistent co-sleepers – the moms that were still co-sleeping after six months – were the ones who seemed to get more criticism.

“They also reported greater levels of worry about their baby’s sleep, which makes sense when you’re getting criticised about something that people are saying you shouldn’t be doing; that raises self-doubt. That’s not good for anyone”.

What Does This Study Tell Us?

Essentially this study demonstrates that, even though a practice is backed up by research that shows it is better for mothers and babies, there is a huge amount of peer pressure to do the opposite. The study also shows mothers who choose to continue to nurture their babies at night feel unsupported, depressed and judged.

Basically, the study highlights all that is wrong with society, and the lack of care and support for families.

As someone who has lived on both sides of the baby sleep debate, I find this study incredibly sad.

Sad for mothers and babies.

We have removed ourselves far from biological norms, and the basic human needs for comfort, closeness, understanding and respect.

We are letting families down on a grand scale.

Why is it, if you choose to co-sleep (or are forced to, as I was with my first little firecracker) you are left to flounder with little to no support? Why is choosing to nurture your child seen as the cause of a mother’s depression, when a ridiculous lack of realistic expectations, support and respect is really to blame?

I’ve been a depressed co-sleeping mama. In fact, if you’d interviewed me for this study, I would’ve presented as a very interesting case.

I became the depressed co-sleeping mother at six months, after being the depressed sleep training/separate sleeping mum at four months. Then I grew to be the mum who overcame depression while still co-sleeping, as I learned that I hadn’t failed my baby by nurturing him.

There are no winners here.

Co-sleeping mums might be more depressed and more judged, but their babies are safer for it.

Separate sleeping mums might be less depressed and less judged, but their babies are placed at higher risk.

We shouldn’t settle for a society that makes us choose either a mother’s wellbeing or her baby’s. It’s a compromise no mum needs to make.

We can and should do better as a society. Only through discussion and by speaking up will we see a shift in the way infant sleep is viewed and managed.

For all of you who can see yourselves in this study, please know you aren’t alone.

You are seen, you are heard and you have my deepest and utmost respect.

We will continue to fight for a better reality.

“I’m Sorry To All The Mothers I Worked With”, Says Company President

Carly Grubb is a primary school teacher by trade, and the mama of two young boys who have helped reignite her love of writing. She has a particular passion for advocating for a gentler path for very tired mothers as they navigate infant and toddler sleep.

“I’m Sorry To All The Mothers I Worked With", Says Company President