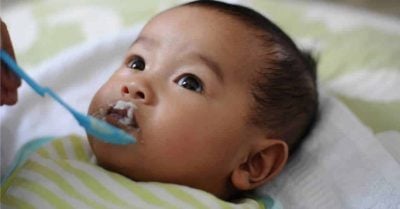 There is a common belief that solid food or formula top up feeds can help to ‘fill’ babies and this might increase the time a baby sleeps in one go.

But is this true?

Despite new research suggesting that introducing babies to solids early helps them sleep better, most of the research published on this topic actually suggests the opposite.

Australia’s National Health and Medical Research Council (NHMRC), America’s Academy of Pediatrics and the World Health Organization all recommend exclusive breastfeeding for 6 months (or ‘around’ 6 months) and then for solids to be introduced while breastfeeding continues for at least one year. These organisations are made up of a team of world leading experts who have taken all the available evidence into account to make these recommendations.

Research shows almost 80% of babies between 6-12 months regularly wake at least once each night.

No difference in night wakings was found between mothers who breastfeed and those who formula feed. It also found giving babies more milk or solid feeds in the day didn’t reduce the need for parents to attend to them during the night.

Yet another study found giving babies solids at less than 4 months of age was associated with shorter sleep durations at 1 and 2 years of age.

So, having sorted that out, just what did this new research actually find?

This new research suggests ‘The early introduction of solids resulted in small but significant improvements in infant sleep characteristics’.

It found babies introduced to solids early slept for an average of – wait for it – 7 minutes more at night. A whole 7 minutes!

And the maximum effect was found at 6 months of age, where the difference was a whole – are you ready? – 16 minutes. Not really worth going against leading health organisation recommendations for, is it?

We all know sleep deprivation is hard. It’s one of the aspects of parenting no one is really prepared for. But there is a reason why we shouldn’t feed babies earlier than recommended.

Leading allergy organisations such as The Australian Society of Clinical Immunology and Allergy (ASCIA) recommend starting solids around 6 months of age in conjunction with continued breastfeeding. There is some evidence this is protective against the development of food allergies or severe eczema.

There is also research showing babies who are spoon fed are more likely to be overweight than babies who feed themselves.

Babies younger than 6 months usually don’t have the motor skills to grasp food effectively and are more likely to be spoon fed by parents. This can also override a baby’s sense of satiety or feeling full, which can affect their appetite regulation as they grow.

Babies Wake At Night For Many Reasons

The truth is babies wake at night and need parental attention. Sometimes they wake because they’re hungry but it’s not always for that reason.

Sometimes they wake because they want a cuddle, or they’re cold, or uncomfortable. They might just miss you and need to know you’re there.

You can find plenty of excellent articles on this in BellyBelly’s Baby Sleep section.

Remember, night waking will pass. Giving your baby solids early will not help you get more sleep. Sometimes, it might feel as if your sleep is going to be interrupted forever but, on the whole, it’s such a relatively short stage in your life.

And, believe it or not, the day will come when you will miss those night-time cuddles!