“I was only 30 weeks, and my baby wasn’t ready to come yet.” Read Kiri’s amazing story

“Prematurity is the number one cause of death for children in Australia” – Dr. Robert Guaran, Executive Medical Advisor in Neonatology.

Finding out you, or your unborn baby, are seriously unwell is one of the most frightening things for expectant parents to discover. According to a BellyBelly poll, having a sick baby is one of the biggest fears pregnant women experience.

Thankfully, there are some fantastic organisations and companies that help parents and parents-to-be of sick babies feel a little less stressed, and a lot more supported.

Natalis is proud to partner with Miracle Babies to support the needs of families with premature or sick newborns. Read Kiri’s story below to see why this work is so very important.

“I found out I was pregnant on New Year’s Day. I was both excited and nervous all at the same time.

My GP (family doctor) consulted with King Edward Memorial Hospital, and I was put on medication to bring my blood pressure back under control.

At 26 weeks of pregnancy, I went for my normal pre-natal check up. My blood pressure had spiked again to 180/120 mmHg.

According to the Heart Foundation of Australia:

I was admitted to Armadale hospital and my blood pressure was brought back under control. My file was transferred to Fiona Stanley Hospital.

From 28 weeks to 30 weeks, it seemed like I was at the maternal unit every day with high blood pressure, and I was having constant blood tests. And from 26 weeks, as my baby started measuring smaller than her gestation said she should be, I was having almost weekly ultrasounds.

Whenever my blood pressure was high, my doctors had told me I should take my medication and re-check it after 15 minutes.

My husband was just about to leave, keys in hand, when he asked what my blood pressure was. I remember saying it was high, and I would check it again. This time it was even higher: 180/110. 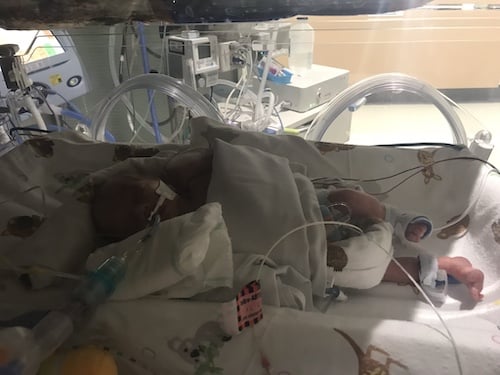 My husband rushed me to the emergency room of Fiona Stanley hospital. The nurse came out and took another reading.

The next thing I know, I was being rushed to the resuscitation bay with my blood pressure now at 217/120.

I was transferred to the maternity unit, which I was now very familiar with. They ran blood tests and pumped me full of blood pressure medication.

My protein test had come back at 28; for a preeclampsia diagnosis, the proteins needed to be at 30. I was admitted into Fiona Stanley with gestational hypertension. That night, I developed severe liver pain, which was brought under control. I was awoken at midnight with steroid shots, but given no explanation other than “This is just in case baby comes early”.

Eventually 8am rolled around. The nurse came into my room and told me my blood pressure was still high, but under control, so I’d be able to go home that morning. I rang my husband to tell him; he was just downstairs in the car park.

By the time my husband made it to my hospital room, I was surrounded by doctors and specialists. As it turned out, my proteins had sky rocketed within a couple of hours.

About an hour later, I was transferred to the labour ward, and was told my baby needed to be born that day.

I shut down emotionally. I couldn’t cope with what I was being told. Not only was I just 30 weeks pregnant, but my baby wasn’t ready to come yet. We were given the option of being induced or having a c-section.

The doctor went away and came back shortly after. We opted for the induction. Then the doctor told me induction could take around 48 hours, and didn’t believe it could be delayed for even 24 hours.

My husband stepped out of the room, and the doctor told him I needed to have the emergency c-section. Basically, he had to choose: me or our baby.

My husband came back into the room. “You need to have the c-section, so I’ve signed the papers”, he said. And off to theatre we went.

She was rushed to the NICU (neonatal intensive care unit) and I was sent to the ICU.

Although I didn’t know it at the time, I had developed not only preeclampsia, but also HELLP syndrome: my liver and kidneys were shutting down.

I was unable to see my baby girl until 11pm the next night. It was the start of our 8-week NICU journey, which was one step forward and two steps back. Even though we thought we’d never get to take our beautiful baby home, that magical day eventually came around.

Our little one is not so little now, and is aged 12 months corrected. She’s the most amazing cheeky little girl we know. We still attend the Miracle Babies playgroup every fortnight, and we’re extremely grateful for the support Miracle Babies provided from the beginning, and still provides today. 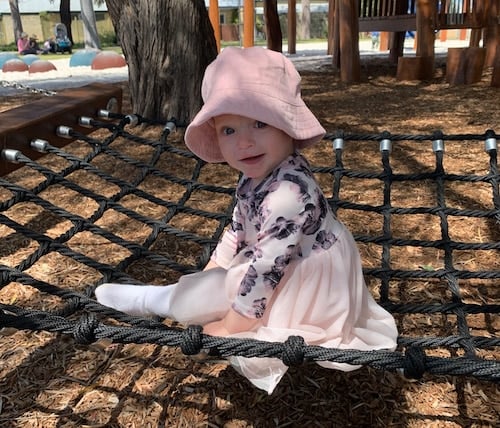 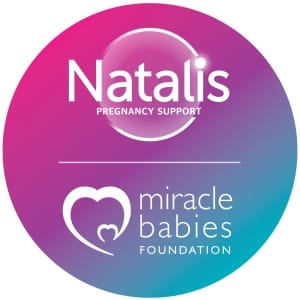 This article is proudly brought to you by Natalis – the NEW pregnancy multivitamin formulated to help support increased nutritional needs right across the motherhood journey – from pre-conception to pregnancy and breastfeeding.

Every purchase of a Natalis product supports a family with a baby in NICU (Neonatal Intensive Care Unit), supporting the work of Miracle Babies Foundation.

What Does AUA Mean On A Scan Result?