Birth is a life changing event.

Many women take the time to seek out the maternity care provider and birthing facility they feel comfortable with.

This is an aspect of birth where we can make choices, in the hope of having a safe and positive birth experience.

In 2012, Caroline Malatesta was halfway through her fourth pregnancy when she decided she wanted a different birth experience.

After three heavily medicalised births, in a hospital where that routinely happened, she was drawn to another hospital, because of advertising that promised a different experience.

In her previous births she had little autonomy; she had experienced birth in stirrups, epidurals, and episiotomies.

Then she saw an ad for Brookwood Medical Center, in Birmingham, Alabama. It promised autonomy, birthing tubs, comfortable suites, and acceptance of personalised birthing plans.

She decided to make the switch, and give birth at that hospital.

What happened on the night she gave birth, however, was nothing like what she had been promised by the ads.

In an unprecedented case, she decided to sue the hospital for ‘bait and switch’ advertising and care.

Ms Malatesta was expecting a birth experience like the ones described in the ads; that was what had led to her transfer of care.

Instead of a birth with full autonomy, and relief from contractions in a birthing tub, she was met with care that left her feeling completely disempowered and in agony.

One of the interventions included being forced onto her back, while nurses held her son’s crowning head inside her for six minutes until a doctor arrived. This left the mother of four with a debilitating nerve injury called pudendal neuralgia, which has continued to cause her severe and chronic pain.

“I’ve been left with a debilitating medical condition, my sex life is gone, I see a therapist, and I’m on medications, both for pain and to ward off panic attacks”, she said, and so she decided to file a lawsuit against Brookwood Medical Center.

They had advertised a calm and empowering birth environment, but Malatesta experienced aggressive medical interventions which led to physical and psychological damage.

Her difficulties, in recovering from this unexpected birth experience, while also caring for four children, have turned her family life upside down.

Is Birth Trauma An Uncommon Event?

While Malatesta’s experience is one of the few cases of obstetric violence that have made it to mainstream media, unfortunately she’s not the first woman to experience a traumatic birth due to care.

For this reason, many experienced mothers and birth professionals tell pregnant women to make informed choices about their maternity care providers and birthing facilities.

What makes Malatesta’s case so unfortunate is that she attempted to make an informed choice about where she gave birth. She assumed the ads were honest, and she expected positive, evidence-based care. That’s not what she received.

Unexpected birth experiences can be traumatic, due to things which are out of human control, but in our over medicalised birth culture, it can also happen because of a professional’s poor care or poor decisions.

You can read more about birth trauma in BellyBelly’s article – Birth Trauma – What Is It And How Can I Get Support?

Can You Win A Lawsuit For Dishonest Maternity Care Advertising Or Obstetric Violence?

Malatesta filed a suit against the hospital for their ‘bait and switch’ style of advertising.

They advertised one style of maternity care, but they not only provided something quite different, they didn’t seem to provide evidence-based care.

Due to Ms Malatesta’s physical and psychological injuries, as a result of her birth experience, two counts were brought against the hospital.

The first was for violating the standard of care for labour and delivery nurses.

The second count was for violating the standards for the marketing of healthcare services.

The court ruled in favour of Malatesta on count one, as well as part of count two, awarding her a total of $16,000,000 in damages. 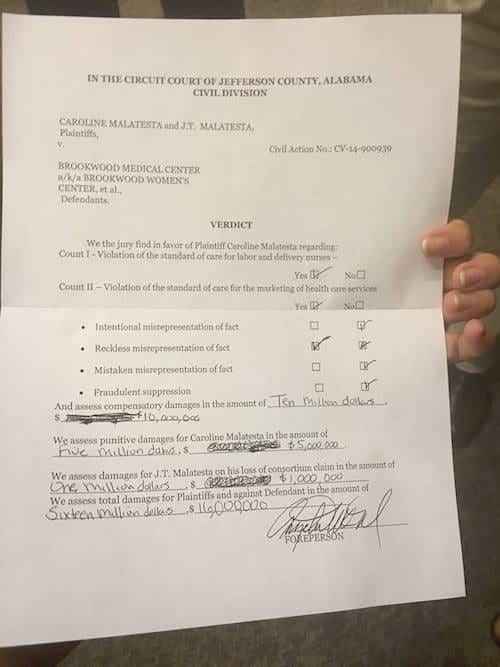 Another woman, Kimberly Turbin of California, brought charges against her obstetrician after he performed an episiotomy by cutting her 12 times! The procedure, which was performed after she repeatedly said no and refused consent, was captured on video.

Shockingly, she had a difficult time finding a lawyer and filing charges. The doctor involved has since surrendered his medical licence, but the lawsuit remains ongoing.

Why Are These Cases Important?

Generally speaking, birth used to be an experience over which women had a lot of control. Typically it took place in their own homes, with experienced female relatives, friends, and often midwives in attendance. Certainly there were risks prior to modern obstetrics, but you might be surprised to hear that the transition of many births from home to hospital wasn’t without risks.

In the early 20th century, it became more and more commonplace for women in western countries to give birth in hospital, with the help of an obstetrician, most often male. The advancement of modern obstetrics certainly saved lives, but it also carried, and continues to carry, risks.

What was once seen as a normal physiological event, became a risky medical event that needed to be managed. Many shocking practices became commonplace, such as twilight birth, routine episiotomies, and routine manual removal of the placenta.

As more and more evidence has come to light, we now know that birth remains a normal physiological event, and any intervention carries risk. Certainly there’s a time and place for medical management during labour, but it’s important that it be evidence-based, and performed with informed consent.

The cases of Maletesta and Turbin are monumental. They lay the foundation for the claim that women not only deserve, but have the right to, informed consent, honest care, and evidence-based practices.

Infant Reflux Disease Is Being Over Diagnosed Says Study

Infant Reflux Disease Is Being Over Diagnosed Says Study