Is Pushing During Labor Necessary? 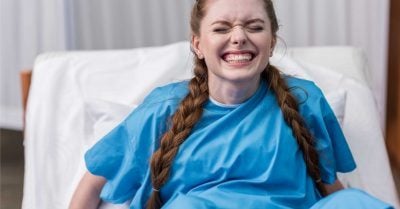 For many women, the second stage of labor (also called the pushing stage) is hard work.

It looks a lot like what you see in the movies – a sweaty, exhausted woman being told to take a deep breath and push, push, push into her bottom.

Eventually – and sometimes after many hours – a baby emerges from her birth canal. Often by this stage, mama is starting parenthood feeling physically depleted and, most likely, with stitches in her vagina.

Is pushing during labor necessary?

Before the advent of obstetric hospital care, women weren’t told to push their babies out during childbirth. How were babies born then, if not pushed out?

Mammals, including human beings, have the ability to give birth while completely unconscious – even during sleep. This is due to something called the fetal ejection reflex (FER).

The FER occurs when a woman’s body spontaneously, and with no effort, pushes a baby out quickly and efficiently.

You can read more about this in Fetal Ejection Reflex – What Is It And How Does It Happen?

So what’s with pushing?

Contrary to the natural urge of spontaneous pushing, directed pushing came into vogue in the western world in the 1920s, when maternity care moved out of the home and into the hospital.

Doctors decided the second stage of labor (the pushing stage) was dangerous for the baby, so it should happen as quickly as possible. Women were often told to start pushing from the beginning of labor and coached pushing became the norm. It exhausted women unnecessarily, as they tried to force their baby out before the cervix had fully dilated.

It was 50 years before research caught up. Researchers eventually realized the second stage of labor has very positive benefits for the baby. In fact, evidence shows it stimulates the respiratory and digestive systems and allows the baby to be colonized by beneficial bacteria.

You can read more in BellyBelly’s article Natural Birth – 5 Huge Benefits For Babies.

Pushing during the second stage of normal labor has no positive benefits for either mother or baby. When the mother is pushing forcefully, she is holding her breath and bearing down. When she holds her breath, she temporarily stops the oxygen flowing around her body, and to the baby inside. This can lead to decreased fetal heart rate and sometimes to interventions by the maternal fetal medicine team, to ensure the safe birth of the baby.

What happens if you don’t push during labor?

One hospital in the United Kingdom has implemented a small change in its maternity care and, as a result, rates of perineal trauma have been dramatically reduced.

The Medway Maritime Hospital in Kent implemented a program to stop coached pushing during labor. This came after the Royal College of Obstetricians and Gynaecologists (RCOG) and the Royal College of Midwives called for action to stop the increased occurrence of severe perineal tearing which, over 12 months, affected almost 14,000 women.

The new program at the Kent hospital included a number of measures, such as staff not telling laboring women to push; encouraging them to breathe through contractions; using upright positions, and supporting the perineum by not pulling the baby out after the shoulders emerged.

The program has been so successful the results were published in the European Journal Of Obstetrics & Gynaecology And Reproductive Biology and there are plans to bring it into hospitals across the United Kingdom.

What does this mean for birthing women?

Until now, perineal tearing has always been considered a complex problem in vaginal birth. Maternity experts suggest tearing occurs because of many factors – such as higher maternal age for first births and increased maternal weight – and do not focus on poor quality care during labor.

Women who give birth in midwifery-led models of care might be less likely to experience tearing, for a number of reasons:

The results of the program and the research in Britain won’t come as a surprise to advocates of normal physiological birth. However, it is hoped more hospital awareness and engagement will help promote a safer approach to labor in obstetric settings and encourage women to seek midwives and doctors who will support a positive birth experience.

Women who do have the urge to push should be supported to work with their bodies gently. Women who need to push to ensure their babies are born quickly and safely should also be supported to do so, but in a way that reduces the possibility of perineal trauma.

You can read more in Tearing During Birth – 9 Ways To Help Prevent Tearing.

Uncontrollable urge to push during labor

Some women experience a strong urge to push when the baby descends through the birth canal. If this is the case, women should follow their body’s cues and push as they need to.

Healthcare providers should stop telling women to stop pushing if they are feeling this urge; it’s completely natural to start pushing spontaneously when the baby’s head descends through the birth canal.

No urge to push during labor

When the cervix reaches full dilation the baby is ready to start its descent but it might take a bit of time for the pushing stage to start. A fully dilated cervix means just that. It also means the first stage of labor is complete and the second is about to start.

Delayed pushing is the term used when the woman reaches the second stage of labor but she doesn’t feel any urge to push. There shouldn’t be any problems in delaying pushing until the woman feels the need to bear down. Delayed pushing might take a few contractions or there could be a time when contractions seem to stop for a short while. Many women experience this ‘rest’ before they start to push.

Some women – especially if they have analgesia, such as an epidural – might not feel the need to bear down when they’re fully dilated; that’s also okay.

Too tired to push during labor

Women might worry about not being able to push after so many tiring contractions. The truth is that giving birth is a physiological act and it’s going to happen as long as the woman feels safe. Even if she’s very tired, her body will go through the whole process of birth perfectly, with or without her active cooperation.

How to push during labor without tearing

In this new study, research shows there’s a significant difference between spontaneous pushing and coached pushing with regard to pelvic floor outcomes. There’s robust evidence to support spontaneous pushing as the kindest to the pelvic floor muscles and the perineum. Directed, or coached, pushing leads to a higher risk of tearing of the perineum and a prolapsed uterus later in life.

Why do you only push during contractions?

In most mammals, labor lasts for only a few hours. During the pushing stage, the baby negotiates a very narrow space. The baby is pushed down with the contractions and rests and recovers in between. While there’s no pressure from the uterus the baby receives lots of oxygen and energy through the umbilical cord until another contraction begins.

As we’ve discussed, bearing down happens physiologically; therefore, a woman pushes because she needs to. Her body just does it spontaneously.

How Do I Choose A Care Provider?

How Do I Choose A Care Provider?

Does Dad’s Diet Affect The Growing Baby In Utero?

Amniotic Fluid Infection | What You Need To Know And Do