Yep, that completely natural thing women have been doing since the beginning of man. You can’t walk through an art gallery without stumbling across paintings of breastfeeding women from days gone by.

Obviously, this would never happen in modern times because breastfeeding is just so damn controversial. I mean, come on, there are breasts involved!

It’s easy to forget how controversial breastfeeding is. You can actually go weeks, even months, without it even crossing your mind. But as soon as the media picks up on a breastfeeding story, commenters will be quick to remind you of just how shocking it is to witness mothers feeding their babies.

Incidentally, if you happen to work in advertising or PR and have a campaign in need of some media exposure, the easiest way to do this is with breasts. Not sexualised breasts though, because reducing women to mere body parts has become so accepted in our society that this is unlikely to raise even a single eyebrow.

So, if it’s media hype you want, you’ll need to include some breastfeeding breasts in your campaign. That is sure to get people talking. Mostly about how offended they are, but hey, still talking.

What Happened When Equinox’s Ad Featured A Breastfeeding Woman

Fitness club, Equinox, ruffled some feathers this week when they dared to feature a breastfeeding women in their latest campaign. The New Year campaign encourages people to get fit in 2016 by committing to the gym. One of the ads features a stunning image of a mama breastfeeding twins and features the tagline “Commit to something”. Their post said, “Table for one, dinner for three. #CommitToSomething.”

What’s so controversial about the ad? Oh, the woman is breastfeeding in public. 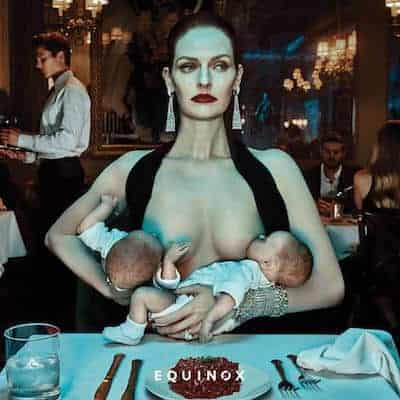 Yep, that’s right, this image represents a beautiful mother to twins who is brazenly feeding her twins in public. She’s not starving them, she’s actually feeding them. In a restaurant where everyone else is eating too. She isn’t locked at home, feeding her babies behind closed doors. Instead she’s doing it in full view of the public, almost as if breastfeeding is nothing to be ashamed of. Ha!

As you can imagine, this advert has been described as ‘natural’, ‘normal’ and ‘a lovely sight’. Just kidding, the sight of breasts being used for anything other than sexual pleasure has, of course, caused a complete breakdown of society. Just about everyone has been offended by this advert.

People were offended because they mistook breastfeeding for sex. One commenter on the Equinox Facebook page wrote, “Sex is natural doesn’t mean I’m going to have it in front of everyone… “ Obviously this is in no way relevant to the breastfeeding photo, but hey, good to know. Thanks for sharing.

People were offended that the campaign used a model and not a real breastfeeding mother. Apparently, we have no time for actors or models these days, we want only real representations of everyone or we will refuse to accept the key message. One of the other images in the campaign features a cat lady. I haven’t seen anyone asking questions about whether the woman featured in that image really owns a lot of cats.

People were offended that the campaign focused on breastfeeding, as though this was a deliberate slight to formula feeding parents. Of course, you’re probably already aware that you can’t even mention the word breastfeeding without it becoming offensive to someone who doesn’t breastfeed. However, I think most people would agree that breastfeeding twins is a huge commitment and effort, therefore tandem feeding those twins is even more impressive. Acknowledging that is in no way a dig at formula feeding parents.

People were even offended that the woman looked nice. Apparently, all breastfeeding mothers should look like crap at all times.

Ahem: women, know your place. When you are a mother, you are no longer allowed to be sexy so go home and put on some jogging bottoms. Yes, of course most breastfeeding is done whilst wearing pyjamas with no makeup and messy hair, but not everyone breastfeed is like that. Heck, I’m sure even the most committed pyjama fans have breastfeed at weddings and parties. Because — and brace yourself because this might come as a shock — your baby’s hunger levels are not influenced by how you look and what clothes you have on.

So, in case you were wondering whether 2016 would be the year society as a whole accepted and supported breastfeeding mothers, the answer is no. People will still be offended by breasts unless they are being used to sell cars. As long as those car adverts are not promoting breastfeeding of course, because people would get all offended again.

Luckily, the Equinox advert received lots of message of support too. Breastfeeding mamas took to Facebook to share their own breastfeeding images, to congratulate the brand on their choice of campaign and, of course, to argue with the asshats.

Recommended Reading: To find out more about why some people continue to find public breastfeeding so controversial, check out this great BellyBelly article The Sexualisation Of Breasts – What Has Caused It?

How Much Do Men Really Know About Childbirth? [VIDEO]

This site uses Akismet to reduce spam. Learn how your comment data is processed.

Think You’re Too Small To Birth Your Baby? You Must See These Photos (NSFW)