As you’re probably well aware, the popular doll millions of girls have grown up with, Barbie, is infamous for having disproportionately large breasts.

Finally, they now have a purpose, thanks to an Australian mother’s invention: Breastfeeding Barbie.

Betty Strachan, a mum of two from Brisbane, Australia, first started making the dolls for her children. 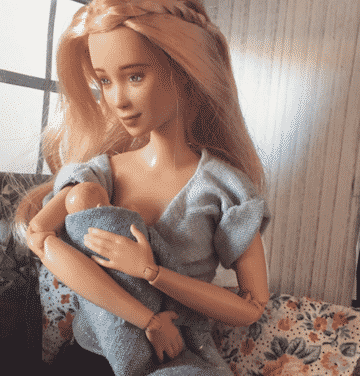 Betty says, “Growing up, it always struck me as odd that there wasn’t as much diversity in the doll world as there could or should be. Not every child is born with blonde hair and blue eyes. Some have freckles, some have gaps in their teeth.”

Unsurprisingly, the dolls have proved popular amongst parents searching for something other than the traditional heavily made up beauty queen dolls on the market.

Betty’s dolls give dolls a new lease of life, allowing the dolls to appeal to a new generation of parents who want more for their children. The breastfeeding doll is just part of that, encouraging children to view breastfeeding as normal. Breastfeeding Barbie would make a great gift for a soon-to-be-older sibling.

Breastfeeding was once seen as the norm and children grew up surrounded by breastfeeding women. Nowadays, it’s more common for dolls to be sold with bottles of toy milk. In books and on tvs, representations of bottle-feeding are much more common than those of breastfeeding.

You may need to request a custom order to purchase one, and be prepared for a little bit of a wait, as the positive media coverage has increased demand. They sell out fast, so you might be lucky to snaffle one up!

The dolls can be made to order so you can choose what your finished doll will look like.

Recommended Reading: Take a look at these 5 Awesome Breastfeeding Ads From Around The World.

It Takes One Year To Recover From Childbirth, Study Finds

Cuddle Clones: A Comforting Option If You Have Lost A Pet

Cuddle Clones: A Comforting Option If You Have Lost A Pet

What Is Latent Phase of Labour? What You Should Know