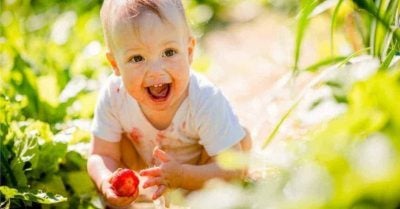 Cancer. It’s the big ‘c’ word so many of us fear these days.

Cancer is scary – especially when you become a parent.

When we welcome our first baby, we just want to do everything we can to keep him germ free and healthy.

We wash our hands, we practically bathe in hand sanitiser, and we do our best to avoid any and all germs.

It can be terrifying when your baby gets sick – even if it’s only a runny nose.

Most of us belong to a generation that surrounds itself with cleaning supplies; we have bottles of sanitiser everywhere, and we can vaccinate against common childhood illnesses.

All this has turned many of us into germ fearing parents.

We believe we can use modern medicine and products to avoid nearly all illness. Surely this is the way to go.

New research, however, is showing too much effort to avoid germs might come with a serious risk.

Professor Mel Greaves from The Institute of Cancer Research, in London, has evaluated the most comprehensive body of evidence ever collected on acute lymphoblastic leukaemia (ALL). This is the most common type of childhood cancer.

Greaves’ research showed ALL occurs in a two-step process.

The first step occurs during fetal development, due to a genetic mutation. Just 1% of babies with this mutation go onto develop ALL.

The second step occurs when the disease is triggered in childhood by one or more common infections.

However, this second step mostly occurs in children who experience a ‘clean’ life during their first year and who have little exposure to other infants or older children.

A lack of microbial exposure could be causing immune system malfunctions, leading to an increased risk in this form of childhood leukaemia.

Is This Really A Serious Risk For Most Children?

In the general population, the overall risk of developing ALL in one’s lifetime is less than 1 in 1000, with the highest risk during the first 5 years of life.

However, in the US, this translates to roughly 5,900 cases of ALL (paediatric and adult), and about 1,400 deaths related to ALL.

The overall risk of developing ALL is low, but Professor Greaves’ research shows the risk is increasing – at the rate of about 1% each year.

Professor Greaves suggests paediatric ALL is a paradox of progress in modern societies. We avoid germs, but this avoidance isn’t without risks.

In a breakthrough paper, published in Nature Reviews Cancer, Professor Greaves compiled over 30 years of research into the genetics, cell biology, immunology, epidemiology and animal modelling of childhood leukaemia.

The compiled research came from Greaves himself as well as from colleagues all over the world.

In this case, Professor Greaves used the 30 years of research to test his theory of ‘delayed infection’ as a potential trigger for ALL. Unlike previous theories, it is the only one supported by such robust research.

In short: ALL is a serious risk. Based on statistics, however, the likelihood of your child developing it is pretty low.

A fear of cancer isn’t something that should be all-consuming, but an awareness of potential triggers is helpful when you are making lifestyle choices.

What Is The ‘Delayed Infection’ Theory?

Previous theories related to ALL included environmental causes, such as man-made chemicals, radiation, electricity cables, among others. But none of these theories was backed by thorough research.

Greaves presented robust evidence for a ‘delayed infection’ theory as the cause of ALL. This theory is early infection has a role in priming the immune system, but later infection, in the absence of this early priming, can trigger leukaemia.

It’s as if the immune system doesn’t have a chance to learn how to function properly as it begins to mature in early childhood. Then, when it is finally exposed to germs, it might begin to malfunction.

Greaves likened ALL to common allergies and autoimmune disorders, such as type 1 diabetes, all of which could potentially be prevented, if the child’s immune system is properly ‘primed’ during the first year of life.

ALL can be treated in childhood, and there is a high rate of survival. However, chemotherapy treatment can also have serious long-term side effects.

ALL and other childhood ailments might be a product of our modern society’s attempt to be germ-free. It seems our immune systems don’t benefit from complete germ avoidance, despite the short term benefit of avoiding common illnesses.

Can Childhood Really Be ‘Too Clean’?

As a first-time mother, I watched my 2-week-old suffer from a serious viral respiratory infection. After that experience, I was determined to keep him healthy. We made sanitiser our best friend. I frequently wiped down household surfaces, and we avoided crowded spaces during the cold and flu season.

After we had four more children, it was clear we had a strong genetic predisposition to allergies. Anecdotally, my oldest suffered from more severe symptoms than his siblings; that’s when I finally learned to lay off sanitising everything.

Reducing childhood illness isn’t a bad thing. However, it seems there’s a fine balance between avoidance and exposure.

In addition to my not-so-scientific anecdotal experience, there’s actually quite a bit of research to show ‘too clean’ environments can be risky for children.

Children who were regularly exposed to bleach showed an increased risk of common childhood ailments, according to Dr. Maya Shetreat-Klein’s research:

Learn more about her research by reading Are Our Kids Too Clean? 6 Facts About Kids And Dirt.

So how do we avoid serious illness without increasing risks? It seems we’re still learning. Some research suggests we do the following:

As the mother of a former premature baby, I know how challenging it can be, at times, to find the right balance – avoiding being ‘too clean’ while recognising the need to drastically reduce the risk of illness during the first year or two of life.

If you have an immuno-compromised child, be sure to talk to your doctor about the best way to balance the two.

In our case, we made sure we avoided germ exposure while we were out, and avoided any childcare settings during our premmie’s first cold and flu season. We made sure she had the all clear for respiratory and growth concerns.

During our avoidance phase, we used sanitiser outside the home when soap wasn’t available, but only used regular soap in our home.

We limited the number of children around her, but we didn’t keep her from her siblings; we just made sure they washed their hands when they came home.

As parents, we want to keep our children as healthy as possible. For a while, it seemed the best way was to avoid all germs. Our modern society made it possible.

However, more long-term research is showing we need to find a delicate balance. We have the means to limit the spread of serious illness, but full germ avoidance doesn’t seem to have long-term benefits.

You can learn more about Professor Greaves research in this video:

Jaundice In Newborns| Cause, Effects and Treatment