One airline is working to make the experience more bearable with some new enhancements to their award winning Economy Skycouch technology.

According to an announcement from Air New Zealand, later this year the airline will make available a dedicated infant harness and belt that allows infants to remain lying down during the cruise phase of the flight.

Previously, they were required to be on a guardian’s lap at any time the seatbelt sign was on.

Anyone who has taken a long-haul flight in economy, with an infant, will know the discomfort, challenge and frustration involved. It’s not easy having a child – awake or asleep – on your lap in a confined space for long hours.

You’re constantly trying to juggle food and drink, limit kicks to the seat in front, and pick up dropped toys and items from the floor space under the seat. You desperately try to snatch precious sleep while keeping your little one perched safely and comfortably on your lap in the limited, cramped space.

For parents, the energy, effort and discomfort involved can be stressful, to say the least. It’s beyond exhausting, for sure. If children can sleep on a flight, it benefits everyone (the passengers around you will certainly agree).

The new harness means you can both be safely strapped in and continue resting or sleeping, even while the seat belt sign is illuminated. 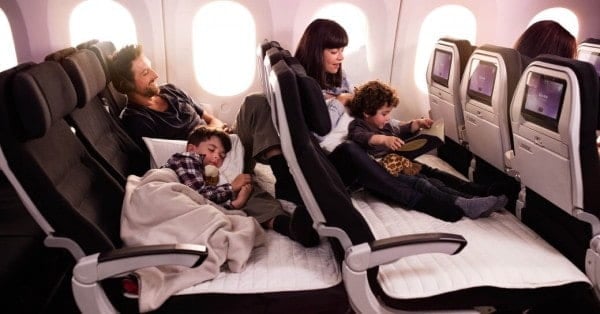 How Is This Different From Premium Economy Or Business Class Offerings?

The name ‘Economy Skycouch’ offers two key insights into what you can expect:

Online reviews indicate when the infant or child is closest to the back of the seat in front, this has minimal impact, but it does prevent two adults sleeping side by side in many instances.

Going in with the expectation you’re sleeping on a couch, rather than a bed might help you appreciate you’re paying for extra space and flexibility, not for total comfort.

Do You Breastsleep At Home?

Breastfeeding/bedsharing parents can rejoice. Your little nursling can access her happy place throughout the flight while you can happily breastsleep and snuggle alongside.

Do You Feel More Comfortable If Baby Has A Separate Sleep Space?

The Skycouch pod allows you to rest alongside your little one, while she is comfortably contained right next to you. 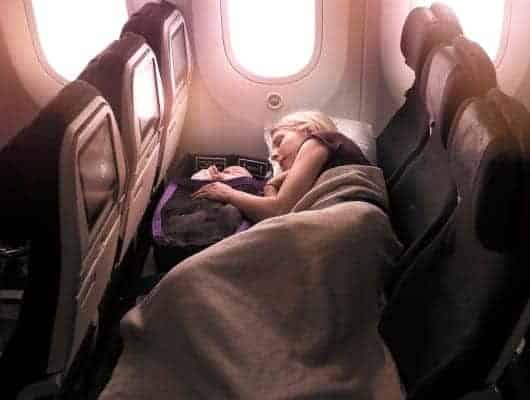 Great news. This update has the capability to allow two children to sleep side-by-side. 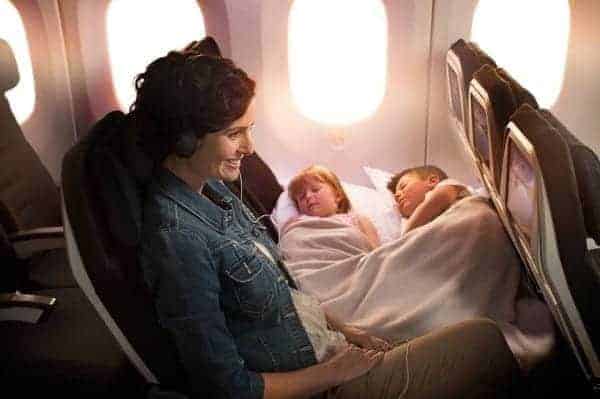 How Much Will This Cost Me?

The Skycouch is an extra and is priced as such. When making a long haul booking with Air New Zealand, you’ll be able to see whether it is available on your chosen flight. The price will vary, according to the unit price of a seat on that particular flight,  and depending on how many people want to utilise the Skycouch row.

With so much variation, it’s best to do your own research. Judging by the searches I conducted, it appears that travelling with young children and using Economy Skycouch is significantly cheaper than opting for Premium Economy or Business Class offerings.

Flying with young babies and children can be challenging, but it’s refreshing to see an airline striving to make the journey much more manageable and comfortable for young families.

Jetting off with your little people soon? Be sure to read Flying With an Infant? 11 Tips For Flying With Your Baby and Flying With a Toddler- 15 Tips and Ideas for more great ideas.

10 Things You Can’t Ask Her Straight After The Birth

Carly Grubb is a primary school teacher by trade, and the mama of two young boys who have helped reignite her love of writing. She has a particular passion for advocating for a gentler path for very tired mothers as they navigate infant and toddler sleep.