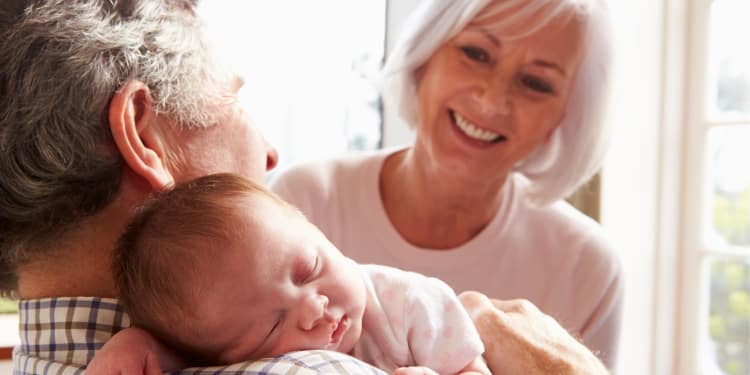 Some time ago I was asked to be interviewed on ABC Radio in regards to current trends in grandparent names.

It wasn’t something I’d thought about in great detail before. After all, both sides of my family already knew what they wanted to be called as soon as they found out I was pregnant with my firstborn… who was to be the first grandchild for both families.

But I hadn’t realised how much diversity and dilemma actually existed surrounding the naming of grandparents in today’s society.

Just when you thought choosing a name for baby was hard enough, it seems grandparent names are on the cards too!

So, why are grandparent names so diverse? I came up with five main reasons:

In the case of blended families where the grandparents may not necessarily be blood relatives, traditional names may not be appropriate or already taken by other members of the family.

Here’s one member’s comments about having to get creative choosing grandparent names – and take your time reading this next bit, it gets complicated!

“My daughter was born with 9 grandmothers and 4 grandfathers. My grandmother was living with us so the distinction came from my grandmother being 4’1” – my daughter dubber her ‘Little Nanny’. This resulted in my mother who was 5’6″ becoming ‘Big Nanny’. Then there was my grandmother’s mother, whose last name was ‘Pretty’, dubbing her ‘Pretty Nanny’! My father’s mother became ‘Just Nan’. My father’s wife (my stepmother) became ‘Nanny Peggy’ (her name). Then there was my mother’s husband’s mother (lol – I LOVE blended families) and his mother was ‘Nanny Power’ per last name. My fiancee’s mother was next (who I might add was quite the jokester and they bugged each other endlessly) and was dubbed ‘Nanny Witch!’ Her father’s side… well let’s just say there was: Nan Toots, Nanny Sherry and Crazy Nanny Maher (was a joke, not meant to hurt her feelings, Nanny Maher called herself that). Funny though that ALL grandfathers were ‘Poppy’!” — Kathryn

Even if some families are not highly cultural or religious, they may choosing names which honour their culture or heritage – or they choose them just to be different to the more common names outside their heritage. Some cultures see their specific names for grandparents as a mark of respect and to call them anything else is disrespectful.

Some grandparents decide on names which were words spoken by a baby, which were an attempt to say something else they had chosen. The word may come out different from what they hoped for, but because the muddled word sounded cute, they kept it anyway.

Some mothers also commented that they felt the first born children in families got to choose or direct the names of the grandparents for everyone else in the family in some cases.

Personality also seems a popular choice for grandparents. Many told me of grandfathers being called ‘Grumpy,’ which was based on personality. There was even ‘White Nanna’ who had white hair and ‘Truckie Pa’ who drove a truck for a living.

BUT – the main reason was…

#5: To Be A Trendy Or Unique Grandparent!

I have come to the conclusion that the main reason we have such diversity in grandparents names is because grandparents just want to be unique or trendy!

Apart from those having set names for cultural reasons, most other families seem to be ditching traditional grandparents names in order to find something unique and trendy to identify the special grandparent that they are.

A pre-dominant comment from grandparents was that they felt traditional names sounded ‘too old’ and they didn’t want to sound like a stereo-typical grandparent who led a quiet life. They still wanted to sound young, active and fun. There are still many who embrace the traditional ‘nanna’ and grandpa’ but it seems these days, nanna and grandpa are making a stand and deciding their own names, with a creative edge!

Why Are Grandparent Names Changing?

Maybe the change in grandparents names is a result of change in society. Our lifestyle has become faster and busier than ever before, so perhaps this has made slow sound ‘untrendy?’ Or perhaps slow is just not as realistic as it used to be?

Blended families have also prompted thought and change as to how we name special people in our life, who have a place in our heart but are not related by blood. Maybe this is a change in trend – just like names go in and out of fashion, maybe grandparents names will too?

No matter what the reason is behind it, grandparents seem to enjoy being able to choose their own names. And why not – it’s a fantastic way to honour those who brought us into the world, enabling us to bring our own beautiful children into the world too.

“Her two children called her mother “Nan(na)”, and her grandmother (the kids great-grandmother) was called “More-Nan”…..a bit more than Nan.” — Yvonne

Here are some examples of unique grandparent names based on a discussion with BellyBelly fans:

Below is a list of grandparent names I came across which may help you in your search for the perfect grandparent name! If you have any suggestions to add, please comment in the box below.

Here’s a long list of grandparents names for you to choose from!

Q: What does a faint pregnancy line result mean?

A: A faint pregnancy line result means you most probably are pregnant. To remove all doubt, simply take another pregnancy test in the coming days, right after you get out of bed. First-morning urine is more concentrated, and more likely to produce a darker result.

Q: What is the diet that will help to conceive a baby boy?

A: If you want to conceive a baby boy, research has shown some specific diet changes can help. This includes foods that are rich in potassium (like berries or bananas) or sodium. Simply adding some salt to the foods that you eat could help you conceive a boy.

A: Babies aren’t equipped with the capacity to talk in sentences. All they can do is babble out a few simple words, like ‘dada’ or ‘mama’. This often happens between 11 months to 14 months of age, but sometimes a little sooner or later.

A: Spearmint tea is safe to drink during pregnancy. It’s most beneficial to drink during the early part of pregnancy, as it can help ease nausea and vomiting. It’s also helpful to drink if you experience an upset stomach.

Q: How do you make sure you get pregnant with a girl?

A: No natural methods will absolutely make sure that you will get pregnant with a girl. Some methods recommend a low salt diet, with lots of fruits and vegetables. It’s also recommended to avoid having an orgasm during intercourse.

10 Best Childbirth Books To Read For A Better Birth Experience

Child's Play: Why Its Such a Big Deal…

My Toddler Drank Dishwashing Liquid – What Should I Do?