Luxe Undies That Handle Your Period, Sweat and Discharge Like A Boss

I have a confession to make (which probably isn’t that shocking really).

I don’t enjoy getting my period.

Yes, it’s a wondrous signal of my fertility, which I am very blessed to experience, yada, yada.

But it’s also a signal that leaks, stress, and discomfort will be with me for a little under a week, when there are plenty of other things I’d much rather be doing.

Of course, that was until I tried out the Holy Grail of women’s underwear, made by Modibodi.

What The Heck Is Modibodi?

Modibodi has created a new breed of women’s underwear.

These magnificent undies are made with state of the art patented fibre technology – consisting of bamboo, sport merino, and microfibre.

This combination helps protect women against leaks, odours, and discharge. Modibodi’s Modifier Technology™ is moisture wicking, absorbent, and stain resistant, as you will see in the video below.

They’ve even taken it a step further by creating maternity products to help deal with breast milk leaks.

So, Are Modibodi Undies Really THAT Good?

If you’ve had a baby, you’ll probably be familiar with a sad fact: maternity wear doesn’t usually have the glamour and sexiness of regular women’s underwear. This is especially the case if you’re bigger breasted. The bigger you are, it seems, the further designers go down the ‘granny fashion’ road. Function rules over style.

But this is definitely not the case with Modibodi. They’ve ingeniously combined comfort and fashion with great functionality, and you can choose from a range of styles, including sports, maternity, sensual (my fave), curvy, and more.

Check out the gorgeous design: 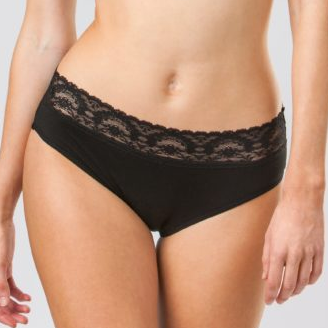 The minute I took the Modibodi underwear out of its packaging, the first thing that struck me was the luxurious silky feel, which I wasn’t expecting. Like, I wanna rub it all over my face kind of soft. Then, a weird thought popped into my head: I couldn’t wait to get my period. Eek! What was happening to me?

The colours were stunning, too. Black is a staple, of course, especially when you have your period. But the coral was captivating – it’s such a pretty colour.

I thought my 14 year-old might like to try them, so I gave her the pair that had been ordered in her size. Sadly, hers were the only pair in the beautiful coral colour (Yes, I did consider stealing them).

She let out an “Ew, gross,” when I first gave them to her, but they made their way to her room. And, she actually wore them. Parenting win!

How Did They Feel To Wear?

At that point, I knew I would now stress less about my period AND I had new and beautiful underwear that felt amazing against my skin. What else could they possibly do to rock my world?

These amazing undies haven’t given me a single wedgie yet. I have been waiting for one, but no… Modibodi are wedgie free undies. That rates them a 10 out of 10 in my book. If I had a dollar for every pair of annoying underwear that would rather sit in my butt crack, I would be a wealthy woman… with a permanent wedgie. But Modibodi seem perfectly designed for women’s bodies in so many ways. I think I’m in love….

And how did they perform?

You have to bear in mind that Modibodi underwear isn’t designed to be used in place of sanitary items. But it’s got you covered for those pre-menstrual days, and for leaks and spotting during your period (or during pregnancy). It’ll also have you sorted for light bladder leakage, discharge, sweat, and odour.

I certainly find them very comforting to wear in the days leading up to, and towards the end of, my period, but they are designed to be worn every day (oh yes, you’ll want to).

When I first tried out Modibodi during a cycle, the universe thought it would play a joke on me. On the first day of my cycle, there was I, hoping for leaks. Crazy woman. But no, there wasn’t a single one. Ha!

In the following days I took a trip interstate, and decided to play it safe, just in case. But right at the end of my cycle, I decided to live on the edge, and wear just Modibodi. It’s designed to handle light spotting or streaking – and it does. It’s also great to save money, and landfill, on panty liners which might or might not be needed. You’ll also save money because you’ll be buying underwear less frequently – stains are a thing of the past with Modibodi.

If you want underwear to cope with light spotting, sweating, or discharge, the light absorbency might be your best bet.

But opt for the medium absorbency if leaks, sweating or discharge tend to be a little heavier.

For everyday use, you might like the super light absorbency underwear. Personally, I don’t mind using the light underwear even when I don’t have my period.

Two things I know for sure: my underwear draw is getting a ruthless cull, and I will be stocking up on gorgeously soft Modibodi underwear, so I can feel like a queen (underneath my clothing) every single day. And why not? If something makes life easier, then I’m all for it!

So there you have it – they do make great underwear for women, for every day of their cycle.

WANT TO TRY THEM OUT? (silly question, of course you do)

So, head over to the Modibodi website now, and enjoy more confidence and less stress about your period, or other discharge and sweating. You’ll be so glad you did.

First time customers can buy with peace of mind, knowing there is a 30-day risk free trial period. If you don’t like how they work, Modibodi will gladly refund your money. And that’s always the sign of a business that offers a great product.

Disclosure: Kelly received complimentary samples of Modibodi, but was not paid to write this review. All thoughts and words contained in this article are her own (…and she’s definitely going to buy lots more pairs of Modibodi for herself and her daughter). Article contains an affiliate link, which won’t add any extra cost to you, but helps support BellyBelly when purchases are made.

The First Postpartum Poop – 10 Things You Need To Know

The First Postpartum Poop – 10 Things You Need To Know