If your younger brother happens to be a famous model, you might as well have some fun with it.

Or, at least, that’s what one hilarious mama decided to do.

Katina Behm, older sister and chief mocker of model Aristotle Polites, figured out the perfect way to tease her younger brother – in a loving way – with the help of her adorable toddler son.

As you might imagine, Polites’ Instagram feed is filled with photos of him – staring into the middle distance while wearing fashionable clothes or, well, not many clothes at all.

After unsuccessfully trying to convince her toddler son, Augie, to let her fasten the buttons on his red plaid shirt, Behm realised she had unwittingly recreated one of her brother’s more memorable snaps.

Seeing an opportunity, Behm uploaded the photograph to Instagram, along with the caption “Imitation is the highest form of flattery”. It quickly atracted hundreds of likes. 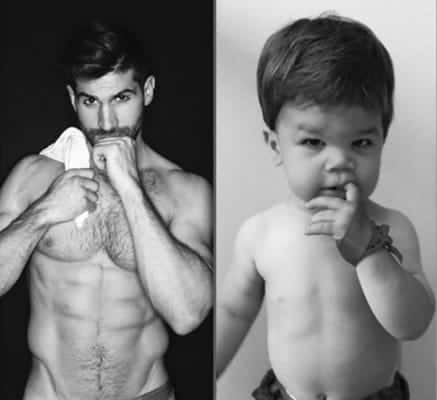 As these things do in families, it quickly became a tradition. Every week Behm took a new shot of her toddler, recreating one of her brother’s professional shots, and uploaded the side-by-side photo to her babyandthebody Instagram account.

The account has been active for six months and has already acquired over 33,000 followers. Polites, who is used to being teased by his big sister, shares the photos to his account too, and asks his followers to vote on who wears it better.

If Augie decides to get involved with the family business in the future, he already has a pretty impressive portfolio showcasing his various model poses. The gorgeous toddler already has his blue steel pose perfected and is no stranger to staring mysteriously off into the distance.

Follow Behm’s account to keep up-to-date with the latest weekly offerings in the great ‘Body vs the Baby debate’. Who do you think wears it better?

Pregnant At Christmas: A Survival Guide

7 Bad Parenting Ideas That Seemed Like A Great Idea

7 Bad Parenting Ideas That Seemed Like A Great Idea