Baby Missing Part Of His Skull And Brain – Look At Him Now! 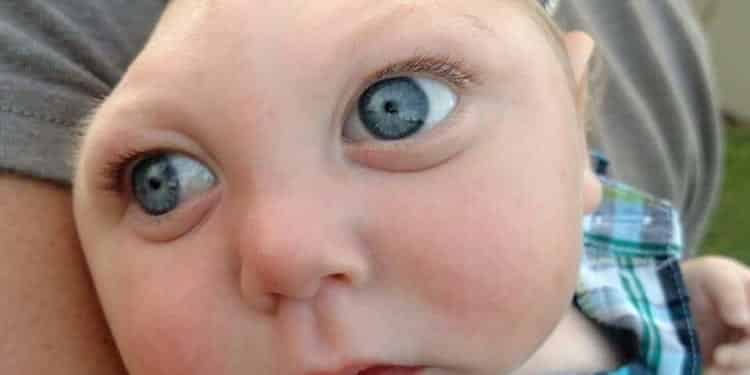 For many parents, antenatal appointments and ultrasounds are filled with excitement as you learn more about your baby.

But for one couple, their antenatal scans quickly became worrisome when doctors diagnosed their baby with a neural tube defect.

At 23 weeks into their pregnancy, doctors advised Brandon and Brittany Buell to consider abortion. Their baby’s condition meant he would have serious birth defects, and he might not even survive the birth.

Brandon and Brittany Buell are devout Christians, and abortion simply wasn’t an option they would consider. They understood their son might not survive the birth, and weren’t sure the extent of his health condition — but they weren’t willing to get in the way of fate.

In an interview with IJ Jaxon’s dad, Brandon, said, “Either way, we knew we would never terminate the pregnancy and had to give Jaxon a chance, and we had to choose life for him because he couldn’t.”

Despite the grim prognosis, the Buells continued with the pregnancy and welcomed Jaxon – now nicknamed Jaxon Strong – into the world just over a year ago.

Jaxon was diagnosed with anencephaly, which is a neural tube defect resulting in parts of the brain and skull never developing. Since his birth, Jaxon has been hospitalized multiple times. He was eventually diagnosed with microhydranencephaly after several health scares.

Jaxon Is Truly A Miracle – Showing Off His Walking And Talking

Doctors prepared the couple for losing their baby or having a very medically fragile baby. While Jaxon does have significant health concerns and requires round the clock care from Brittany, you can see him in the below video, defying expectations:

The couple gracefully handles their outings and interactions with curious onlookers, by sharing the positive aspect of how wonderfully Jaxon is doing, despite his circumstances. They also remain positive saying, “I try to stay positive 99 per cent of the time, but there is that 1 per cent because I know the reality of the situation – that we’re probably going to outlive him.”

What About Jaxon’s Future?

Jaxon’s condition is a serious one, and one that requires a lot of medical care. He’s already defied the expectations of doctors, but things do remain uncertain.

The couple set up a GoFundMe account to assist with the cost of his care. Brittany is unable to work due to the round the clock care Jaxon needs. They’ve been blessed and quite surprised by the generosity having received over $82,000 of the needed $70,000 for the care for his second year of life.

Being faced with the advice to consider abortion due to birth defects can be a very challenging one. Though their road ahead remains filled with challenges, Jaxon has already blessed his parents in many ways. He babbles away in baby talk, attempts to walk with support, and smiles and interacts with them – more than they were told to expect.

Fenugreek And Breast Milk Supply – Does It Help?

Fenugreek And Breast Milk Supply - Does It Help?