Parents: Would You Agree To Be Photographed In Your Sleep?

Would you let someone photograph you while you were asleep?

What about if that photograph was going to be shown to people around the world?

That’s what 40 inspiring couples did as part of a new photography project focused on relationships during pregnancy.

The project, Waiting, gives us an insight into a very intimate and private time in a couple’s life.

Jana Romanova is a photographer based in Saint-Petersburg. Her documentary photography allows viewers a glance into life in modern day Russia. Her work focuses on the collective identity in post-Soviet countries. Russia is a country experiencing transition, and Romanova’s work captures this perfectly. When she was 25 years old, Romanova’s friends started to settle down and have babies.

Romanova told Vice’s Elektra Kotsoni, “All the fun and the drinking and the hitchhiking stopped and, for me, it was a really difficult moment because I felt like I was alone.”

If you’re one of the last in your friendship group to have a baby, life can be pretty strange for a few years. All of a sudden, your friends are more interested in talking about burping and nappy bags than the things you used to talk about. They may go out less and have less time to chat to you on the phone. When Romanova noticed this happening in her own life, she decided to come up with a creative way of dealing with it.

Waiting is a photography series featuring 40 photographs of expectant couples sleeping. Why 40 couples? Because there are 40 weeks of pregnancy, of course. The first picture came about coincidentally. Romanova told Vice that after spending the night at a pregnant friend’s home, she woke up in the morning to find the couple sleeping on the floor. Romanova quickly scaled a ladder she found in the apartment and took a photograph of the sleeping couple.

Writing about the project on her website, Romanov said: “Young Russian couples, inhabitants of Saint-Petersburg and Moscow, are sleeping in their bedrooms early in the morning, the time when people don’t really care about their appearance, being natural. They are preparing to become parents in few months, and the project investigates not only their attitude to each other during the period of expecting a baby, but also the way young families live in big cities of modern Russia, 20 years after the fall of the Soviet Union, the country that will be known to their children only from history books.”

The images allow us a glimpse into the lives of these couples. A look through the keyhole into what is a private moment between two people about to begin their journey as parents. Not only do we see the couple themselves, but we see how they interact subconsciously in their sleep. Some couples snuggle each other tight, and others sleep far away from each other on the bed.

The photographs were taken in the bedrooms of the couples, giving us an idea of who the couples are. We see their rugs, their bedside tables and the decor of their homes. These photographs truly allow the viewer to create a personality for the couple and also to imagine what their family life might be like. 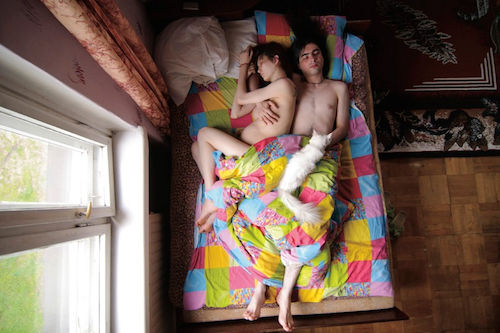 So, what do you think, would you agree to be photographed in your sleep? Let us know in the comments section below.

Recommended Reading: Have you seen the photo series showing what breastfeeding is really like? Check out BellyBelly’s article Photo Series Captures Reality Of Breastfeeding.

Metallic Taste In Mouth During Pregnancy

HELLP Syndrome | What Is It?

10 Things That Are Normal When You Have A Newborn