40 Reasons To Give Your Baby 40+ Weeks Of Pregnancy

In recent years, some women have been electing to birth their babies early for non-medical reasons, such as convenience or fear of a big baby.

This worrying trend leads to a plethora of increased risks and health problems for both mother and baby. Problems that you don’t want to be worrying about during the birth, or recovering from after the birth.

The babymoon should be a special, bonding time with lots of snnuggles and cuddles, without worrying about pain or illness.

Think about it logically: in an extra week or two, your baby isn’t going to miraculously gain an extra five centimetres circumference on his head, nor add an extra kilo of weight.

A week will make little difference in terms of size, and no matter if you have a big baby or a small baby, women can have difficult and easy births.

So many factors come into play, but if you’ve done some good research on active birth, you’d know a thing or two about how to labour in a way to make it easiest for your body and baby — no matter how much they weigh at birth.

Some women may be advised to have their baby before the estimated due date as the result of health complications — for example preeclampsia (a dangerous condition involving high blood pressure). Obviously, waiting longer would not apply to these women, who have hard evidence that their baby or their own health is at serious risk. This article is intended for those who are considering scheduling the birth for theirs or their doctor’s convenience, with no evidence of a health problem. Inductions add risks when sometimes there were none.

An important fact to remember is that reaching 40 weeks of pregnancy in itself is not a sign of danger. Once you’re post dates, your midwife or doctor will be monitoring you much more regularly. Signs and symptoms from your body or abnormal test results will provide evidence if an induction or c-section would be safer for your baby.

If your doctor recommends having your baby before 39 weeks, question whether there is a problem with yours or baby’s health to make it truly necessary. Ask what evidence that have found to come to that conclusion. If it’s truly necessary for your baby to be born early, find out if it would be safe to wait until you are as close to 39-40 weeks as possible.

40 Reasons To Give Baby 40 (Or More) Weeks Of Pregnancy

So, before you decide to induce — emergencies aside — here are 40 reasons to give your baby 40 weeks of pregnancy or more.

Reasons To Give Baby 40 Weeks – For Your Baby:

#1. Babies born at 40 weeks are better able to suck and swallow thanks to their more advanced muscle development.
#2. This sucking and swallowing will aid breastfeeding, which will in turn build a strong bond between you and baby.
#3. Babies born at 40 weeks are better able to control their own temperature — this is partly due to the extra fat they have.
#4. Generally speaking, more time in the womb equals less time in hospital.
#5. Brain development accelerates during the last five weeks of pregnancy — let your baby’s brain finish developing.
#6. Babies bulk up during the last few weeks of pregnancy, this extra fat allows them to prepare for birth and the first few days of life.

Babies born at term are less likely to suffer from:

#7: Jaundice — an excess of bilirubin in the blood can cause the skin and eyes to look yellow. The liver removes bilirubin from the blood. A premature baby is more likely to suffer from jaundice because his liver may not be fully developed.
#8: Respiratory problems — while in utero, your baby’s lungs are filled with fluid that helps them to grow and develop. At the end of the pregnancy, and during the birth, this fluid is absorbed or expelled to prepare the lungs for inhaling oxygen. Premature babies are more likely to suffer respiratory problems because their lungs may not be fully developed at the time of the birth.
#9: Seizures — premature babies have an increased risk of seizures during their first few days of life. They are also more likely to suffer from epilepsy and other seizure conditions in later life. Pre-term birth has also been linked with epilepsy.
#10: Brain hemorrhages — intraventricular hemorrhages are common in premature babies. While most will disappear without treatment, some may cause more serious problems.
#11: Hearing problems — premature babies have an increased risk of developing hearing problems. This could be because they are born before their hearing has fully developed, leaving them more sensitive to noise than other babies.
#12: Low blood sugar — during the last few months of pregnancy, the baby builds a store of glycogen to regulate blood sugar. Premature babies are at risk of low blood sugar because they may not have had time to build adequate stores of glycogen.
#13: Cerebral palsy — while risk factors do not cause cerebral palsy, the presence of some risk factors may lead to an increased chance of a child being born with cerebral palsy. According to the Cerebral Palsy Alliance, one of the biggest risk factors is premature birth (less than 37 weeks).
#14: Babies born at 40 weeks score better on standardised tests than babies born at 38 weeks.
#15: Babies born before 38 weeks have an increased risk of behavioural problems.
#16: Babies born early are less able to stay awake long enough for a full feed.
#17: More than a quarter of babies born electively between 37 and 39 weeks had to be admitted to the neonatal intensive care unit, compared to one in 20 babies born after 39 weeks. Infant mortality rates for pre-term babies born between 34 and 36 weeks of pregnancy are four times higher than rates for infants born at full term.
#18: Babies born before 38 weeks are more likely to be re-admitted to hospital. 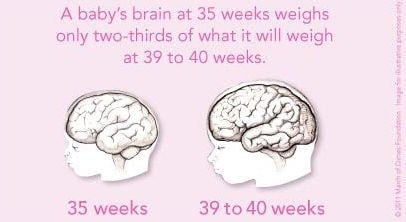 Reasons To Give Baby 40 Weeks – For The Mother:

#19: You’re about to be severely demoted to someone new and exciting — put it off and enjoy being number one for a little bit longer.
#20: Use the extra time to take a babymoon with your partner.
#21: You’re bonding with your baby even when she’s in the womb. Keep her in there and let the bond strengthen — you know, before she starts throwing up on you and crying all the time.
#22: You might not believe it now, but you will miss your bump when it’s gone. The little kicks, hiccups, knowing she’s in there.
#23: Make the most of this extra time with your partner, you won’t have much time alone for the first few months after the birth.
#24: You’ve probably still got a huge to do list for before the baby arrives, give yourself time to work through it.
#25: Waiting for labour to start naturally gives you a better chance of sticking to your birth plan.
#26: Get some sleep — you won’t have much time to rest once the baby arrives.
#27: Seriously, why are you still reading this? Get some sleep before it’s too late!

Reasons To Give Baby 40 Weeks – For The Birth:

#28: Waiting for labour to start naturally means you won’t be induced. Induction comes with increased risk for you and baby, including post partum hemorrhage.
#29: Being induced makes you more likely to have a c-section. Electively induced labor more than doubles the risk of c-section compared to spontaneous labour. The risk is more than tripled when cervical ripening medication is used. Note: all inductions are not the same – having your waters broken is not the same as having medication to start labour (artificial oxytocin is continued throughout your labour until after the birth).
#30: A c-section section is major surgery with a gruelling recovery time. A recent review of 90% of US birth records found that it’s also more risky than vaginal birth.
#31: Allowing labour to start naturally decreases the likelihood of you having interventions and complications. Around 15% of inductions required an assisted birth such as a forceps or ventouse delivery.
#32: Being induced can increase the length of your labour.
#33: Syntocinon (Australia) or Pitocin (US), is the artificial oxytcin hormone used to induce labour. It produces strong, painful contractions but doesn’t produce any of the feel-good, bonding or pain-killing hormones of natural labour. Experts believe induced labour is more painful than labour that starts naturally. Artificial oxytocin doesn’t cross the blood brain barrier, and doesn’t act in the same way as natural oxytocin does.
#34: Induction and cesarean both lead to an increased risk of infection. As many as one in 10 women who give birth by caesarean section suffer infection.
#35: Babies born by cesarean are more likely to suffer from breathing problems than those born vaginally.

#36: Your due date could be out by up to two weeks, since due dates are worked out based on averages (a 28 day cycle and ovulation on day 14) and full term is classed up to 42 weeks of pregnancy. Give your baby extra time in the womb to finish maturing. What you think is 38 weeks could actually be 36.
#37: Trust your baby to decide when she’s ready to join the world. She knows best.
#38: Babies aren’t convenient. They throw up as soon as you’ve finished dressing them, they poop as you’re walking out the house, and they want to breastfeed as soon as the window cleaner shows up. You may as well get used to the inconvenience now — you’ve got a lifetime of it ahead.
#39: Slow and steady wins the race.
#40: This is one thing in life that’s worth waiting for. You didn’t take any pain killers during pregnancy, you avoided alcohol — this is one big thing that will give your baby a great start in life, strong, healthy and ready.

Be sure to read our article, Natural Labour Vs Induced Labour – 6 Main Differences.

6 Surprising Reasons Why Parents Yell At Their Kids

How Long Can Breast Milk Be At Room Temperature?