Hospital Covertly Filmed Moment Couples Told There Was No Heartbeat

Heartbroken couples have been filmed as doctors told them they had suffered miscarriages.

A UK hospital has come under fire after it was revealed the couples were filmed without their consent.

The Big Brother style cameras were set up to film what was happening in the room, much to the shock of the couples, who were later informed their personal tragedies had been recorded.

The cameras were set up in the scan room at Rosie Maternity Hospital in Cambridge to obtain footage for an upcoming Channel 4 documentary.

A4 signs were placed around the hospital to warn parents that filming was taking place, but many feel this was inadequate, and the cameras were an infringement of their right to privacy at a time of such devastating personal loss.

As anyone who has visited a hospital recently will know, the walls are covered in printed signs and informative posters. It is easy to see how a patient could fail to read them all.

Hospital staff have claimed they were told not to inform couples about the cameras, although this claim has been refuted by the documentary makers.

According to news reports, three women were approached and asked whether footage recorded in the room could be used. The covert cameras had recorded the moment the pregnant women were told the devastating news they had lost their babies.

The three women refused consent, and were left understandably angry such a private moment had been filmed without their permission. 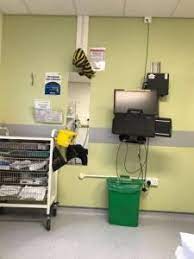 A Channel 4 spokesperson said footage would not be used without the patient’s permission. They said it would be deleted if the patient didn’t consent to it being used.

The documentary examines stillbirth, and hopes to break the taboo around this heartbreaking experience. The filmmakers claim footage could potentially play an important part in destigmatising stillbirth.

The hospital defended its part in the documentary, saying the decision was based on feedback from patients who had previously suffered stillbirth.

Many patients reported a lack of information about stillbirth. The hospital felt the documentary would be a positive step forward in tackling this problem.

Midwives, doulas and charities criticised the hospital, and spoke out against the hidden cameras. Many felt the cameras were an unacceptable intrusion into a very traumatic moment.

And, clearly, some of the couples involved agreed.

7 Things That Are Scary When You Have Kids

Baby Kept You Awake All Night? 5 Things You Shouldn’t Do Today

Baby Kept You Awake All Night? 5 Things You Shouldn’t Do Today