3 Things Keeping Your Baby Up At Night 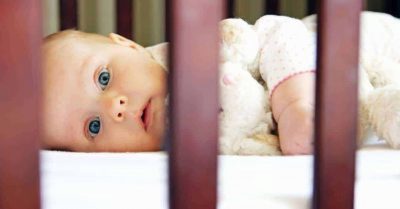 Despite the claims of sleep trainers, it is very normal for babies to continue waking at night in the second six months of life, just as they do in the first half of that year.

What you might not expect though, is that babies wake more at night than they did previously!

The myth of babies sleeping through the night continues to leave parents disappointed and confused when their own baby’s sleep pattern bears no resemblance to that in the sleep training books.

3 Things Keeping Your Baby Up At Night

So, it is reassuring that the growing evidence base of actual research into sleep patterns of babies and toddlers is showing us what really happens behind closed doors.

Growing babies need sleep. But that sleep is unlikely to be undisturbed. Development itself will interfere with sleep patterns and understanding why can help accept this stage in a child’s life.

Most parents of babies who are learning to crawl notice their baby practices this in their cot. A crawling baby will move out from under the covers, get themselves stuck in uncomfortable positions and end up at the other end of their bed!

But research has revealed that learning to crawl itself disrupts sleep patterns – and it’s not a short-term thing!

A 2013 study looked at the sleep patterns of babies over a period of months and found they woke more frequently – and stayed awake longer – in the month leading up to crawling achievement and for as much as three months after learning to do so!

The study used actual data collected from a device called an ActiGraph, which is similar to the sleep function on a fitness tracker or phone app.

Dr. Dina Cohen of the University of Haifa’s Department of Counseling and Human Development says: “It is possible that crawling, which involves a vast range of changes and psychological reorganization in the babies’ development, increases their level of arousal, influences their ability to regulate themselves and causes a period of temporary instability that expresses itself in waking up more frequently”

If there is one thing parents know about teething, it is that it results in sleepless nights!

Almost 75% participants on one study attributed sleep disturbances to teething , yet other research has proven wakefulness has not been shown to consistently occur in the days before and after a tooth erupts.

Perhaps the interrupted sleep parents blame on teething is related to other factors – like crawling – which coincide with the eruption of teeth in the first year and beyond. A baby woken by his movements in the cot might be harder to resettle if aching gums are bothering him.

Many parents look to the Wonder Weeks to explain their baby’s behaviour in the early months, yet forget they continue well into the second year of life.

Between 6 – 12 months, several significant development periods occur and each is likely to be preceded by disturbed sleep. The Three Cs associated with the “fussy periods” leading up to a Leap are often more noticeable in this age group but blamed on teething, not mental development.

You can expect to see the impact of Leap 5 around six months, Leap 6 between 8-9 months and Leap 7 between 10-11 months. These coincide with mobility development associated with crawling, sitting, standing and walking and may lead to a wakeful baby – or make it hard for a baby woken by teeth or movement to return to sleep.

Sometimes, it might feel like you will never get a full night’s sleep again and with poor support from society for parents of wakeful babies it is likely the only help anyone offers is to suggest sleep training.

Rather than thinking of your baby as something broken, which needs to be fixed, you can be confident your child is developing typically and will one day no longer wake in the night due to growth and development.

Are Commercial Baby Foods Unhealthy? What You Need To Know

Why Harvard Researchers Say We Need To Co-Sleep

Why Harvard Researchers Say We Need To Co-Sleep