Instead of having to painfully wait for any early signs of pregnancy before you take a pregnancy test, how awesome would it be if a result window appeared on your belly saying, “Yes! You are definitely pregnant! Huzzah!”

It would certainly beat peeing on a stick, that’s for sure.

But for us mere mortals, here’s the low down on finding out whether you’re pregnant, as well as a list of those much anticipated pregnancy signs and symptoms.

The 16 Symptoms of Pregnancy

To help you get to what you want to read the most, here is a summary list of the most common 16 pregnancy symptoms:

When do pregnancy symptoms start?

You might want to know how soon pregnancy symptoms can start.

Some women say they ‘just knew’ the moment they conceived, as if they had a feeling or intuition that conception had occurred.

However, you won’t start noticing any signs of pregnancy until after implantation.

Implantation occurs from about 7-10 days after ovulation.

A fertilized egg starts to produce hCG (the hormone which pregnancy tests detect) after implantation, not before.

This is why it’s not possible to have any physical signs of pregnancy or detect a pregnancy before this time.

Wait for a missed period before taking a home pregnancy test

As hard as it may be, it’s best to wait until you have a missed period before you crack open a home pregnancy test kit, to ensure your early pregnancy hormone levels are high enough for an accurate result. Find out more in our article, How Accurate Is An Early Pregnancy Test?

Below are 16 early pregnancy symptoms which you may or may not experience.

Remember, every woman and every pregnancy is unique.

There’s no need to panic if you don’t have a specific pregnancy symptom listed below – you may have few or many signs of pregnancy and still have a healthy pregnancy.

Are You Getting BellyBelly’s Pregnancy Week By Week Updates?
We think they’re the best on the internet!
Click here for the FREE weekly updates our fans RAVE about.

This is quite a niche sign of early pregnancy, and will probably only help the fertility buffs out there who have been tracking their BBT for a while. But it’s one of the first early signs you might spot!

If you chart your cycle and take your temperature, you will notice your BBT will remain high throughout your luteal phase.

Progesterone causes your BBT to rise upon ovulation, and it will stay elevated should you be pregnant.

If you’re not pregnant, your BBT will drop and you’ll get your menstrual period as normal.

Another one of the first early pregnancy symptoms you may notice is a missed period.

While this symptom is the one we most commonly associate with pregnancy, there may be other reasons why you may experience a missed period.

For example, if you have high levels of stress, if you’ve been travelling in a plane, or if you’ve had a major illness or surgery, you may end up with a missed period, or it may be late. Find out more about other reasons for a missed period.

On the other hand, it’s possible experience bleeding during pregnancy.

Right after a missed period, morning sickness is often the next expected step during pregnancy!

Don’t let its name fool you – morning sickness can pay you a visit any time of the day.

Make sure you’re eating enough, and avoid letting your blood sugar levels drop. This can be hard when you’re suffering from food aversions, but try and eat healthy if you can – avoid the temptation to binge on sugar or junk food. Drink plenty of water too.

For many pregnant women, morning sickness disappears by the end of the first trimester.

From early pregnancy, not too long after you get a positive pregnancy test, you may notice some early signs of pregnancy in the form of changes in your breasts, including:

Hormonal changes in early pregnancy can result in increased vaginal discharge. A surge in progesterone often results in a surge of cervical mucus production.

Some women may notice a little, and some notice much more. If it bothers you, a panty liner may help.

See our article discharge during pregnancy – what you need to know.

If you just fell asleep reading this, you could be pregnant.

When you first become pregnant, your metabolism steps up a few gears in order to support your developing baby as well as your own body. This creates one big workload.

Not only that, but the hormone progesterone which is required in high levels during pregnancy has a sedating effect. No wonder you feel so very tired, especially in that all important first trimester! If you need to rest or sleep, don’t fight your body – it needs it.

Read our article about pregnancy fatigue for more information.

As soon as a week after conception, you may be dashing off to the toilet more often, only to find that you’re urinating small amounts.

This happens because the embryo starts to secrete the pregnancy hormone (hCG), which signals for the blood supply to increase in the pelvic area.

This results in the bladder becoming irritable, so it passes small amounts of urine. You may wake in the night to urinate more often than usual.

Ironically, many women experience this pregnancy symptom once again in the third trimester… because babies seem to thoroughly enjoy bouncing on their mama’s bladder.

Some pregnancy symptoms can be unnerving for many women. This is especially the case with cramping.

However, even when not pregnant, your uterus is continually contracting. When pregnant, the foetus grows and pushes against the walls of your uterus, which causes it to contract – this is very normal.

If the cramping is accompanied by bleeding, see your doctor who can assess the situation to see if you may be having a miscarriage. See our article bleeding during pregnancy for more information.

Women can have both cramping and bleeding in pregnancy and be able to continue on with a healthy pregnancy.

Of all the early pregnancy symptoms, bleeding and spotting is the most scary to experience.

Thankfully, spotting is usually nothing to worry about. It’s likely implantation bleeding.

At around 8-10 days after ovulation (just before you would normally get your period) you may notice light spotting, which can happen when the fertilized egg attaches to your uterus lining.

The spotting is usually pinkish in colour and not red like a normal menstrual period.

These pregnancy symptoms just keep getting better don’t they?!

Increased pregnancy hormones have an effect on your intestines, making them more relaxed – this helps with making more space for the baby as your uterus expands.

As a result you may get constipated.

Luckily there are plenty of things you can do for relief!

Check out our article on constipation during pregnancy.

There are some constipation remedies available over the counter from your pharmacist that are safe for pregnancy – but check with the pharmacist before purchasing them.

Start with safe, natural remedies first, as some are very effective.

Some popular preparations contain aspartame, which is best avoided. 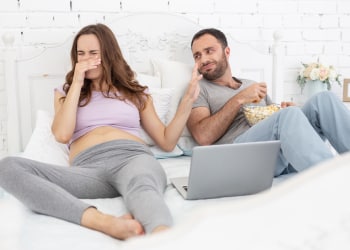 If certain smells are making you feel nauseous, it may be another one of these “fun” early signs of pregnancy!

Pregnancy has heightened your sense of smell.

Smells which never bothered you before may become intolerable, causing nausea.

Food and cooking smells are usually the culprit, however every woman is different and may dislike all sorts of smells.

A fetus is very clever, even at an early age! Normally, your body would see something like a pregnancy as a foreign object.

But your baby has other plans.

Your immune system is suppressed and prevented from attacking and rejecting the foetus, thanks to hormones and antibodies the foetus produces.

The antibodies also take part in the growth and development of the placenta.

As a result of these hormonal changes to your immune system, you are more susceptible to colds and flu.

Many women experience nasal stuffiness, which is very common in pregnancy due to the hormonal effects on the nasal passages.

Some women will have pregnancy symptoms all over their face!

Even if you don’t usually get pimples or acne, you may get them in early pregnancy.

Acne during pregnancy will most likely settle down fairly quickly after your hormone levels stabilise.

Make sure you do not pick or squeeze pimples, which may spread bacteria and could result in scars.

For more information about acne in early pregnancy, see our article about pregnancy acne.

The rising hormone levels in your blood can affect your saliva.

You may notice a metallic taste in your mouth, which alters the taste of foods you usually enjoy.

Some women crave things which are not foods, for example dirt, clay or chalk. This is a condition called pica. It’s believed this may happen due to mineral deficiencies.

Ask your naturopath or medical practitioner to check your levels of ferritin (iron stores) and zinc, as you may be deficient.

#15: Change in Colour of Your Vagina

This is unlikely to be one of the early pregnancy symptoms that first makes you discover you’re pregnant.

In fact, unless you spend a lot of time admiring yourself in a mirror, you’re unlikely to notice this one at all.

Due to the increased level of blood in the pelvic region, you may find your vagina will appear more purplish than normal.

Of all the pregnancy symptoms, mood swings and being overly emotional can be the most embarrassing (afterwards, at least!).

It’s generally accepted that during pregnancy, you will cry in front of your boss, swear at your partner daily and donate all of your life savings to charity because the kitten on the advert looks so sad.

Hormones are going crazy, right from conception – it’s definitely one of those tell-tale early signs of pregnancy. Early on, most women come face to face with mood swings, emotional outbursts and have a meltdown or two.

And yes, it’s totally reasonable to sob over nappy adverts.

Dads-To-Be: A Guide to Labour & How To Support Her

Dads-To-Be: A Guide to Labour & How To Support Her

Can You Eat Sausage Rolls When Pregnant?

When Do Babies Stop Curling Their Toes?