Self proclaimed “Baby Whisperer” Tizzie Hall once again has parents and safety authorities questioning her advice.

Known for her controversial book “Save Our Sleep”, Hall has come under fire for suggesting parents swaddle their babies while using infant car restraints – in direct contradiction of Australian safety standards.

Hall’s tip to keep the baby in the harness is to add a product called a Houdini Stop – designed to prevent older children working their arms out of the straps.

“Tizzie has found the Houdini stop to [sic] especially convenient for baby’s who are still being swaddled. You can swaddle you baby, pop them in their carseat or pram, fasten the 5 point harness and then use the Houdini stop to keep the straps firmly over your baby’s shoulders!”

She adds a disclaimer below:

On her Facebook Page, Hall responded to concerned parents:

“… The clip needs to break in an accident or it wouldn’t be safe. The reason I started recommending a Houdini Stop for babies was I was finding newborn babies were curling up in the car seat and getting their arms out. I thought there had to be a better way and I found the Houdini Stop which is like what they use in the USA for car seats. When I was looking for a place to have it crash-tested I found out so many things about car seats for infants under 6 months, I now believe no baby should travel in a car seat swaddled or un-swaddled without the Houdini Stop.

I have had tests done on the Houdini Stop and if it did open in an accident the straps would be in the correct place at the time of impact and it is the car-seat harness that would hold the baby in place. Another reason to use it, without it the straps might be in the incorrect position for both a swaddled or unswaddled baby. I can assure you I would not be advising parents to use the Houdini Stop with swaddled infants if I thought there was a risk … I believe it is the safest way for infants to travel….”

“About a year ago we were all on here having the same talk about ISOFIX now it is legal no one is saying things like this. I did not sell car seats before ISOFIX before it was legal in Australia and people … told me it never would be well it is. I hope one day there will be a law stating all babies in Australia can travel as safe as babies in the USA with a chest clip it takes time for things to change but with time it will.”

“DO NOT UNDER ANY CIRCUMSTANCES wrap your baby like this in a swaddle or blanket and place in a child car seat or a pram/stroller. Arms and legs MUST be sticking out of the harness straps. The Houdini strap is not recommended and is designed to break apart in a crash therefore your baby could be ejected from the child car restraint or could jack knife out. See the case of Qld baby Isobella who was ejected right out of the car because she was swaddled then placed in her baby safety capsule. She died at just 4 months of age. The parents simply did not know of the danger they were placing her in.” 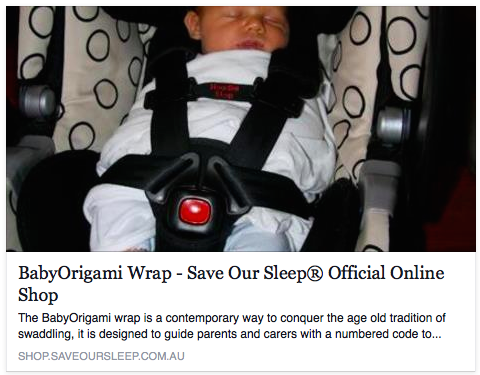 Swaddling babies is recommended by Hall as an aid to infant sleep – conveniently, she sells the recommended wrap and the Houdini Stop in her online store, along with various other products she supports. Hall recommends wrapping until your baby is able to roll while wrapped –which she says can be as old as 10 months.

However, the Houdini Stop website does not recommend the product for use with swaddling or rear-facing infant car restraints. According to it’s safety testing:

“The Houdini Stop chest clip has been safety tested at the Autoliv Test Facility in Melbourne, Australia. To the AS/NZC 1754 Standard. In short the Houdini Stop was found not to interfere with the performance of any part of the harness. In all tests the Houdini Stop did not move up and have any contact at all with the throat area. It was also shown to come apart in certain test situations.”

“If friends, family, or celebrity ‘experts’ suggest swaddling in the car, we beg you – ignore the advice. They’re wrong, and you’ll be exposing your child to an immense (and unnecessary) risk.”

The article explains it was the death of a baby in December 2011, who was thrown from her capsule after being wrapped in a blanket prior to being strapped in. This tragedy lead to the 2013 version of the Australian Standard requiring all child restraint manufacturers to include warnings and advice against wrapping or swaddling in every rearward facing child restraint instruction manual.

“The specifications for AS/NZS1754:2013 The Standard states for Type A child restraints include advice about the potential for an infant to be ejected or killed if a baby is wrapped in a blanket or swaddle. In addition, provide advice that the harness needs to fit the baby firmly and any other covering may only be placed over the harness after the harness is adjusted firmly. Advice should be provided that the infant’s legs are not to be bound or wrapped together and that the arms are not bound or wrapped together.”

A Baby Whisperer Blanketed in Controversy

This is not the first time Hall has caused safety concerns with her unsubstantiated advice.

In her ‘Safe Bedding Guide’, Hall claims that babies are too cold because parents don’t use enough blankets. Hall blames an assortment of infant behaviours on being cold, including:

No evidence is offered to support these claims.

Hall recommends a maximum of 10-12 blankets for babies under 12 weeks of age, and as many as fifteen for older babies.

Brazenly challenging SIDS guidelines, Hall advises against tucking blankets in: instead, parents are instructed to ‘cocoon’ their baby by piling blankets on top of the baby and tucking them under her body. In addition, babies are to be dressed in: “A bodysuit, a babygro or a bundler, a safe sleep bag and a Doublewrap.”

“Make up baby’s bed so baby sleeps at the bottom of the cot and the blankets can only reach as far as baby’s chest, ensuring baby cannot move down during sleep and get his/her head covered by bedding.”

Their Making Up Baby’s Cot advises: “Tuck blankets in firmly OR use a safe baby sleeping bag.”

Tizzie Hall appears to have absolutely no relevant qualifications or training; her claim of expertise in sleep and settling stems from teenage experience as a babysitter.

“My advice is not medical or scientific, but a collection of tried and tested solutions and tips based on many years of experience with babies and young children.”

Hall’s sleep training regime promotes the “graduated extinction” method between 7pm and 7am. If your baby vomits in distress during this time, which Hall believes can be “learnt behaviour”, she advises to not make a fuss and simply change the sheets (once you notice your baby has actually vomited) and continue the routine. Certainly not a treatment any human deserves, let alone one who is so distressed lying there with no comfort, only a pool of vomit. 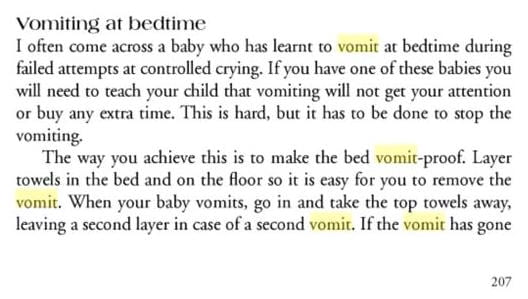 Strict feeding and sleeping routines are enforced from birth.

Her advice demonstrates a lack of formal lactation education or training, as well as infant health (including mental health) training. If she had these things, she would understand the emotional and physical repercussions of her potentially damaging regime on babies and breastfeeding.

According to an article from Irish Australia (published 2011) which was available on Tizzie’s site at the time of writing:

“Hall flirted with the idea of becoming a vet, moving to England when she was 18 to undertake veterinary studies at Nottingham University. The realisation she would have to touch animals’ teeth soon put an end to that ambition. Babies were always in the picture.

“When I went to university I was babysitting or nannying. When I finished, I started helping people with their babies in London. I went from house to house solving sleep problems. And I became the person people would call when their baby wouldn’t sleep.”

What Is SIDS? 6 Things Families Need To Know

What Is SIDS? 6 Things Families Need To Know