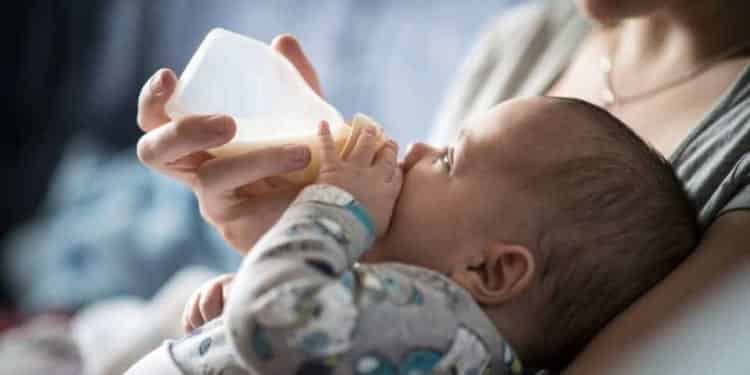 Researchers have identified a link between childhood obesity and excessive protein intake, most likely from too high levels of protein in formula milk during the first two years of life.

Baby formula contains higher levels of protein than breast milk, and it’s now believed this may play a part in childhood obesity.

A study of around 1,500 infants was published in the American Journal of Clinical Nutrition. They investigated the effect of infant feeding on childhood body mass index (BMI) scores.

Six years later, the BMI of these children were compared, allowing researchers to draw conclusions on the link between infant feeding and childhood obesity. The babies fed on high protein formula were found to have higher levels of fat at age six, and were more likely to suffer from childhood obesity.

Protein In Formula Much Higher Than Breastmilk

Formula milk tends to have a much higher protein content than breast milk. The protein levels in breast milk change over time, allowing the milk to best meet the baby’s needs. Newborn babies need more protein than older babies.

The protein levels in breast milk reduces by about a third by week four, and by the time the baby is 10 to 12 weeks old, the breast milk contains half as much protein as it did during the newborn stage. In formula milk, protein levels are fixed at a high level to ensure they meet the needs of a newborn baby.

Follow-on formula — designed for infants aged six to 12 months — is of particular concern. The upper limit level of protein is very high, and is currently being reviewed.

Formula fed babies are between 12 to 14 percent more likely to develop childhood obesity than breastfed babies. It’s now believed this is due to the high levels of protein present in formula milk.

Around one in four children are overweight in both the UK and Australia, and this rises to one in three in the US. Childhood obesity is one of the risk factors for obesity in adulthood. The health risks of childhood obesity include Type 2 diabetes, asthma, obstructive sleep apnea, cardiovascular risk factors and musculoskeletal problems.

How Can I Avoid High Protein Baby Formula?

If you formula feed your baby, look for a formula milk with a low protein content. When shopping, compare the protein contents per 100 ml and select one of the milks at the lower end.

The World Health Organisation recommend exclusively breastfeeding your baby for the first six months, and then continuing to breastfeed for up to two years or more.

Relaction is possible for some mothers who have stopped breastfeeding. For more information, see BellyBelly’s article here.

Recommended Reading: How The Heck Does A 3 Year Old Get Type 2 Diabetes?