Vitamin K And Newborns – Everything You Need To Know 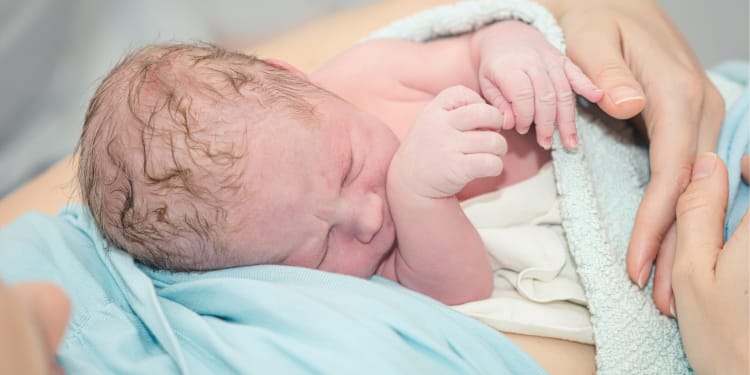 After the birth of your baby, one of the first decisions you will need to make, in terms of medical procedures, is whether or not to have a vitamin K injection administered.

This has been a standard, routine procedure in many countries for over 50 years.

Even so, few people really know a great about the injection, except that it is proposed as a way to prevent vitamin K deficiency bleeding in newborns (VDKB).

You can read more about Vitamin K Deficiency Bleeding In Newborns here.

Some parents question whether the vitamin K injection is as necessary as it is promoted to be. Let’s look at what vitamin K is, and whether newborns are really deficient in this important nutrient.

What Is Vitamin K?

Vitamin K is a fat-soluble vitamin, which means it is absorbed through the small intestine with dietary fat, and stored in body fat.

There are two types of naturally occurring vitamin K:

Like dietary fats and other fat-soluble vitamins, ingested vitamin K is absorbed through the small intestine and transported to the liver for storage. It can also be found in the brain, heart, pancreas, and bone.

Very little vitamin K circulates in the bloodstream. It is metabolised and excreted quite quickly; about 20% of oral intake is excreted through the urine, and up to 50% via bile in the faeces.

This rapid use of vitamin K explains why there are low levels found in blood and body tissues.

Not much is known about the process of absorption and transportation of vitamin K produced by gut bacteria, but research seems to indicate that it satisfies some of the body’s requirement for vitamin K.

The body can also recycle vitamin K, through a process called the vitamin K-epoxide cycle. The vitamin K cycle allows a small amount of vitamin K to be reused many times; this explains why oral requirements are so low.

What Does Vitamin K Do?

We only need a small amount of vitamin K for effective blood clotting. If the level of vitamin K drops, the clotting factors are slow to be activated, which makes it harder for blood to clot.

The specific daily requirement of vitamin K is difficult to determine, because it is not only obtained from dietary sources, but is made within the body, and also recycled by the body.

It is very rare for adults to be deficient in vitamin K, unless they have malabsorption disorders, or if they are taking medications that interfere with vitamin K metabolism.

As well as making its own vitamin K within the small instestine, the body obtains vitamin K from dietary sources, including:

All babies are born with levels of vitamin K that are around 30 to 60% lower than those of adults.

To date, this has been considered, and treated, as a deficiency, rather than a normal occurrence.

When looking at the research into this area, we see a distinct lack of interest in why all newborns are born with levels of vitamin K lower than adult levels.

The adult level of vitamin K is the benchmark for what is considered to be normal – even though it is well established the infant coagulation system is not the same as in adults, and doesn’t mature until 3-6 months.

The significance of normally occurring ‘low’ levels of vitamin K doesn’t seem great, until we consider the ways in which nature is determined to ensure these levels remain low:

So, either nature has made a huge error, or perhaps there is a good reason why babies are born with lower levels of vitamin K than adults.

Over the last few decades, research has progressed. It shows newborn infants don’t have the same coagulation system as adults.

This supports the idea that nature certainly didn’t get it wrong. Universally, babies are born with levels of vitamin K that are lower than those of adults for a reason.

In order for human beings to absorb vitamin K they need to have a functioning biliary and pancreatic system. At birth, a newborn’s pancreas and digestive system are still immature and won’t become fully developed until around 6 months of life.

This is why babies need breast milk, and do not take solids until after 6 months of age. It assists the digestive system to mature, and provides beneficial bacteria, which can help create and process the increasing levels of vitamin K.

Vitamin K levels are virtually undetectable in umbilical cord blood. This suggests that babies aren’t receiving any vitamin K from their mothers via placental transfer. This is normal, especially when we consider babies are born with their own inbuilt system to protect against, and repair, damage and bleeding in their organs – all thanks to umbilical stem cells.

These stem cells can only travel around the body while the blood remains thin, and when the umbilical cord is left intact after birth (delayed cord clamping). It wasn’t until the late 1980s that cord stem cells were discovered, a few decades after vitamin K prophylaxis had become routine for all newborns.

Does Vitamin K Cross The Placenta?

According to this study, there is a specific vitamin K2 transport system in the human placenta. A vitamin K2 subtype called Menaquinone-4 (MK-4) is transferred through the placenta at a higher rate than vitamin K1, and activity increases in the third trimester.

The study points out there is little vitamin K1 transfer to the fetus. This has been viewed as poor transfer of vitamin K overall. This study, however, suggests the wrong type of vitamin K has been looked at when determining whether vitamin K crosses the placenta.

Vitamin K levels in breast milk is often considered to be too low, in comparison with other mammals’ milk, or with fortified formulas.

Research into vitamin K levels in breast milk was originally performed in the days when restricted breastfeeding was the norm, meaning babies were fed to a strict timetable, and often limited in terms of how long they could nurse.

Vitamin K is found more readily in colostrum and hind milk, which is high in fat and comes after the watery foremilk.

More recent research in this area suggests the level of vitamin K in breast milk is sufficient to prevent vitamin K deficiency, despite most health experts maintaining the opposite.

The study also found that supplementing with vitamin K1 increased the levels of a vitamin K2 subtype called MK-4. This is important because MK-4 is a preferred form of vitamin K for the brain. MK-4 activates proteins involved in maintaining the structure of brain cell membranes, and also manages inflammation and oxidative stress in the brain. Vitamin K2 is particularly affected by the use of blood thinners, and by gut health.

Another study, from 2004, compared the milk from mothers living in different areas of Japan. Researchers noted differences in vitamin K concentrations, which were attributed to the differences in the dietary habits of the women. Fermented soybeans (natto) is a particularly high source of vitamin K2.

An earlier study from 1997 found that 2.5 and 5.0 mg of vitamin K1, when given daily to women in the postpartum period, significantly increased the levels of vitamin K1 in breast milk.

A study of preterm infants, done at the same time, found maternal supplementation of natural Vitamin K1 raised the content of breast milk to target levels.

When women consume vitamin K1, their tissues are able to convert part of it into the vitamin K2 subtype MK-4, which is essential for growing infants. There also appears to be a way in which the breast concentrates vitamin K2 in mammary glands, ensuring an adequate supply of this nutrient to infants.

In the first few days of life after birth, breastfed babies will receive colostrum – the ‘first’ breast milk.

This nutrient-rich milk has immune protective factors, which help to colonise the baby’s gut with prebiotics and probiotics, as well as form a protective barrier against unhelpful bacteria.

Colostrum also contains significantly higher levels of vitamin K than mature milk. Babies who breastfeed soon after birth, feed frequently, and for as long they want, will obtain more colostrum than those babies who are separated from their mothers, or are unable to feed frequently.

This is relevant when we consider in the past babies were often unable to breastfeed for quite some time after birth. Strict feeding routines were instigated in hospitals, and encouraged at home; this practice possibly interfered with the intake of vitamin K.

What Are The Alternatives to The Injection?

Parents who wish to avoid the injection, and still ensure their baby is provided with extra vitamin K at birth, might want to look at any of the following options.

Studies have shown oral dosing of vitamin K is as effective as an injection dose, as long as the correct doses and schedule are followed.

The injection delivers one dose of 1mg into the muscle, which acts as a store, releasing the vitamin K over the following weeks and months.

The main concern for care providers is to ensure the baby ingests the dose (doesn’t spit it up), and receives all doses on the schedule.

Missing a dose is associated with an increased risk of VKDB. A study from 1997 showed that, while oral vitamin K mostly lowers the risk of VKDB, it is less effective than the injection.

The other concern with giving vitamin K orally arises if babies have undiagnosed gallbladder problems. Although rare (1 in 60 000 babies), gallbladder problems in infants are serious. If babies are unable to absorb fat, including fat soluble vitamins such as vitamin K, it can increase their risk of VKDB.

If you use a weekly or daily oral vitamin K regimen, it’s important to ensure your baby has the dose with a feed; taking it on an empty stomach might mean it is not absorbed so well.

Exclusive breastfeeding has long been considered an increased risk factor for VKDB. However, as seen in this article, there is transfer of vitamin K across the placenta, and via breastfeeding.

Until the last 100 years, babies were exclusively breastfed , either by their mothers or a wet nurse, and extended breastfeeding (feeding beyond 12 months) was more common than unusual.

Until the Industrial Revolution brought us the convenience of packaged food, most people ate simple diets that included plenty of vegetables, animal protein, and fat. Food wasn’t processed, other than to be preserved, no synthetic chemicals were added, and it was often seasonal and fresh.

Antibiotics were still in the future, and many cultures favoured fermented foods – particularly as a form of preserving vegetables for the winter months.

Since the early 20th century, there have been significant changes to our diets, medical practices, pregnancy care, and attitudes to breastfeeding, compared with the previous 100 years, and earlier. It’s quite likely this has affected vitamin K transfer between mothers and babies – during pregnancy, and in the post natal period.

Ways you can increase and maintain vitamin K levels during pregnancy and breastfeeding:

How Do Genes Affect Baby’s Weight?

Vitamin K Deficiency Bleeding In Newborns – What You Need To Know

Vitamin K Deficiency Bleeding In Newborns – What You Need To Know