A male breastfeeding kit that allows dads to feed their babies is on the way.

For dads, breastfeeding is one area of baby care they’re not equipped to handle.

But, thanks to a British project design student, future dads can take over nourishing their babies.

Designer Marie-Claire Springham says she invented the ‘chestfeeding kit’ after learning the most common trigger for postnatal depression in mothers is the pressure to breastfeed.

“This project began when I learnt about the code of silence that surrounds the issue of mental health and new parents.

“I was shocked to learn that over half of women experience emotional problems postnatally or during pregnancy and that new fathers also often suffer, experiencing feelings of exclusion and a fear of being ‘unable to cope’ ”.

How Does The Male Breastfeeding Kit Work?

The ‘chestfeeding’ kit was Ms Springham’s final year university project and is still in the concept stage.

That didn’t stop it from recently being crowned the winner of the world’s first Meaning-Centred Design Awards.

The dad-to-be takes a hormone once a day, beginning as soon as he knows his partner is pregnant.

This hormone is progestin, a synthetic form of progesterone.

It stimulates production of the milk-producing glands needed for breastfeeding.

This hormone stimulates prolactin, the hormone that triggers milk production.

The dad-to-be must continue to take this hormone cocktail for as long as he wishes to breastfeed.

Ms Springham based the drug regimen on information she gleaned from forums.

She noted the experience of trans people, who reported taking similar hormones to bring on lactation.

According to Ms Springham, suckling a baby would have the same effect on dads as on mums.

When a baby latches onto the nipple, it produces another hormone, called oxytocin.

That’s the reason she has included a pump in the chestfeeding kit.

There is also a compression vest, which is the male equivalent of a maternity bra.

Is A Male Breastfeeding Kit Safe? 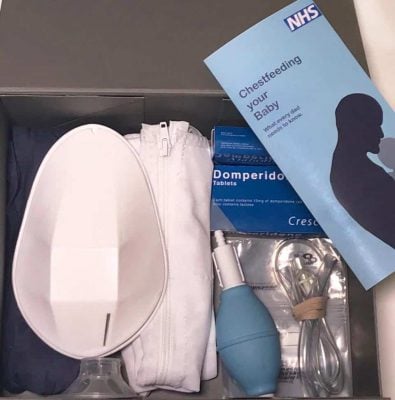 However, what isn’t clear is whether Ms Springham has investigated the effects of the prolonged use of female hormones by males.

Female hormones, such as progesterone, are rarely used by men, except to treat medical conditions, including testicular cancer or prostate enlargement.

The reason? Female hormone treatment suppresses the production of testosterone in men.

The hormone testosterone is responsible for the development and maintenance of male sex characteristics.

When female hormones suppress testosterone levels, men might experience changes that affect the physical state and function of their sex organs.

Domperidone has a host of side effects, and has been linked to a heart rhythm problem

Men might also develop breast tissue and enlargement of their nipples after taking these medications.

There is also the potential for side effects similar to those women experience when taking the contraceptive pill; these include bloating, headaches and mood swings.

Have you ever wondered why men have nipples?

In the first few weeks of development, male and female embryos follow the same path.

This involves the development of nipples.

If the embryo is male, the nipples are already in place, and remain.

Interestingly, males of many different mammalian species have the potential to lactate.

Only one species has the ability to do so spontaneously: the Dayak fruit bat of Southeast Asia.

In human beings, both men and women have breast tissue.

In men, there is only a small amount of breast tissue, which is mostly fat, with a few ducts and some connective tissue.

The important ingredient in lactation, however, is prolactin.

This is the hormone produced by the pituitary gland. It stimulates the mammary glands to produce milk.

Spontaneous lactation in human males can occur, but only under certain conditions:

Do Women Need Men To Be Able To Breastfeed?

“The kit has the power to take what we thought we knew about parenting and turn it on its head, breaking down the strict gender and societal roles we have created for new parents”.

On one hand, breaking down strict gender and social roles is attractive.

What breastfeeding mother hasn’t been up in the middle of the night, staring furiously at her sleeping male partner and his worthless nipples?

On the other hand, wouldn’t it be better to support women to breastfeed?

For millennia, women have breastfed and evolution has had no problem with it.

From the late 1800s until recently, however, breastfeeding hasn’t been so popular.

It wasn’t ‘the done thing’ if you could afford infant formula, and was discouraged by medical professionals.

Even today, women face incredible bias and discrimination about the normal way to feed a baby.

Women are biologically designed to breastfeed. Mostly they want to, but often struggle, and are left without support.

Eventually the pressure becomes extreme and something has to give. Usually it’s a woman’s mental health.

Springham sees the male breastfeeding kit as “an empathy tool that enables dads to take a more active role in the first six months of the baby’s life and allows moms to relinquish some of the pressures and duties of parenting”.

In the first days after birth, a breastfeeding mother requires time to get her supply established. Having someone else to take over feeding undermines her ability to continue to breastfeed.

“This really misses the point. The focus should be on reducing the many hurdles to breastfeeding women face, and on improving breastfeeding support for women; this will enable more women to reach their breastfeeding goals”.

Is A Male Breastfeeding Kit A Good Idea?

Under certain circumstances – for example, in same sex male couples or when a mother has a double mastectomy – male breastfeeding might be the most appropriate solution.

However, while the male breastfeeding kit is still only an idea, we have no research to show breast milk from hormone induced lactation is safe for babies.

Do we know what consequences this could have for developing babies and their short and long term health?

We also have to consider the results of men taking female hormones for long periods of time.

What impact would it have on their own health and on their relationships?

And what about the ramifications if the male partner took over breastfeeding and was unsuccessful in maintaining supply?

Until these questions are answered, we should focus on supporting more women to breastfeed rather than undermine them.

Human donor milk and wet nursing are other alternatives to maternal breastfeeding that health experts and research support as the next best thing to mother’s milk.

Faint Line On Pregnancy Test – What Does It Mean?

What Is A Cervical Lip? How Can It Hijack Your Birth?

What Is A Cervical Lip? How Can It Hijack Your Birth?