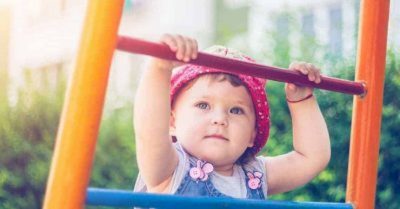 Most parents spend a lot of time wondering why their kids won’t listen.

Are they doing it deliberately? Do they need their hearing checked? What’s going on with kids these days?

As a mama to five, I do my fair share of struggling to get my children to listen.

Since having my youngest, I’ve also been thrown into the world of physical and occupational therapy.

My mind has been absolutely blown by the intricate relationship between children’s opportunity for movement and their behaviour.

Our modern parenting styles might be interfering with our children getting the level of movement they need to develop the ability to concentrate and listen to directions.

As a child who grew up in the 80s and 90s, I spent quite a bit of time outside. There were hours of child directed play and exploring the outdoors.

Apart from parents pointing out when something was legitimately dangerous, safety on the playground wasn’t a major concern.

How “Don’t Do That, You’ll Fall!” Is Affecting Our Children’s Development

My youngest child was born at 31 weeks and had a congenital birth defect that required surgery. In her early months she was quite docile, and had a fairly significant motor delay. Despite her motor difficulties, I made a point not only of allowing but encouraging her to take risks.

Why? Because without big movement kids can’t properly develop their proprioceptive and vestibular senses, which are vital to concentration and learning.

Experiencing a motor delay – just in the first 9 months of her life – affected my daughter’s vestibular and proprioceptive systems. Fortunately, therapy is a massive help and we’re working on overcoming the difficulties.

The very interesting thing, however, is these systems are not only affected in children with motor delays.

The majority of children in modern westernised cultures are deprived of adequate time for big motor play and discouraged from risk taking.

My daughter wears a cranial helmet, because of a congenital misshapen skull, and because she is prone to stumbling.  I still encourage her to take as many risks as she can on the playground, which brings quite a few stares and comments.

And then, when their 2 year-old follows my child, parents find themselves surprised by their child’s capability but also apprehensive because their child is now taking a risk.

When we don’t allow children to climb, swing, take risks, jump and run about on uneven surfaces (e.g. rocks, sand, mulch, and grass) we prevent them from learning about their own bodies. Without the maturing of their proprioception and vestibular systems, their bodies become a distraction.

They can’t focus in the classroom, sit at the dinner table or stop jumping on grandma’s couch – all because their bodies are too distracting.

What Are The Proprioceptive And Vestibular Systems?

Before my daughter was born, all I really knew about the vestibular system was it had something to do with balance.

Now that I have older children and one toddler with a motor delay, I’m wondering why these two systems aren’t mentioned more often to new parents.

Proprioception is what tells you where your body is, without you having to look at each body part. For example, right now I’m typing but I’m looking at the screen and not at my hands. Proprioception allows you to move from the gas pedal to the brake pedal without looking at your feet. It allows you to walk through a doorway without bumping into the walls.

A lack of properly developed proprioception can lead to children being extra rough with their friends without realising it. It’s often seen in kids who trip more often than their peers. Do you have a child who constantly wriggles at his desk and falls out of his seat? It could be related to proprioception.

Vestibular sense is how we perceive our bodies in relation to the things around us, including the way we balance ourselves and work with gravity.

Why is big motor play important? It helps children learn how their bodies move, how gravity works, and how to take appropriate risks.

The human body is quite amazing. When a child has an underdeveloped proprioceptive or vestibular sense the urge to move is even greater. The developing body knows what it needs. It needs movement. The child who seems to be bouncing off the walls isn’t trying to drive you crazy; his body is insisting on getting the movement it requires.

The best time to develop these senses properly is during the first six years of life. Children who don’t get enough big movement during that time are less likely to be able to listen and focus because they’re distracted by their own bodies.

For them, the sensation of getting dressed might involve feeling the seams of their clothing in an intense way. Sitting down to do homework can feel torturous because they’re unable to focus while the body is squirming in a chair.

When my son was around 20 months, I became pregnant and experienced hyperemesis gravidarum. His screen time increased and his time outside decreased. We’ve worked hard to get him outdoors and active, but so far he’s the only one of my children who has struggled to sit still and focus during class. Although purely anecdotal, his situation suggests those few months of having less big motor play seemed to have had a lasting impact.

How Much Big Motor Play Do Children Need?

Because of the childhood obesity epidemic, many public service campaigns have surfaced. A popular one recommends a minimum of 60 minutes of big motor play per day. And even though any movement is better than no movement, experts recommend quite a bit more.

It varies by source but some experts recommend the following:

Although these recommendations involve a lot of hours, it’s what paediatric occupational therapist and author, Angela J. Hanscom, suggests for optimal development.

Big movement is vital for our children’s developing bodies. If we want them to be able to focus, do well in school, and be able to listen to us, we must help them meet their bodies’ need for physical movement.

Even if you can’t fit five hours in, do your best to give them as much activity as possible. Sometimes, adapting your rules can help. Perhaps a three hour trip to the park isn’t possible, but letting children slide down the stair rail or bounce on the couch are things you might allow to get extra movement in.

My daughter had a big vestibular set back during the winter when we spent more time indoors. We eventually purchased a small trampoline with a handle, and an indoor swing to help us get more physical activity, regardless of the weather.

And although we got these things for our toddler, the older boys have also benefited. If they do a little bouncing while I prepare dinner, there’s more cooperative sitting down at dinner time.

What Activities Are Helpful For Proprioception And Vestibular Sense?

For older kids, it can take a bit more effort and coaxing. Limiting screen time is a vital part of ensuring older children get enough activity. Considering their long school hours, it can seem impossible. However, it is manageable and even if you don’t manage four hours, any bit of activity helps.

Children with typical neurological development need only limited guidance. Children naturally seek out the sensory input their bodies need. Even so, our lifestyles and too much screen time can interfere with children taking the opportunity to listen to their bodies’ needs.

Activities that help proprioception and vestibular sense include:

When you’re unsure of what to do, simply provide space for them to climb, explore the outdoors, and take age appropriate risks.

Yes, climbing has risks. However, as we’re now learning, not climbing also carries risks. Our children need to take risks to develop age appropriate listening skills and concentration. If we don’t allow children to have big play and learn risk assessment now, it can affect their education later. A bump and a bruise in toddlerhood might very well be worth it, if it makes for an easier time in school in later years.