Rust Never Sleeps… Nor Does Endometriosis 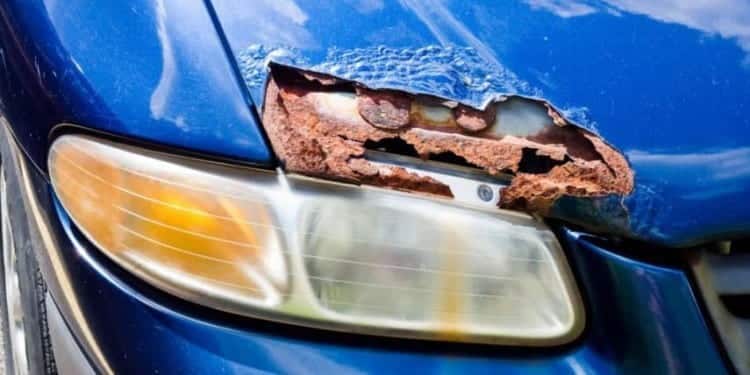 When rust gets into a piece of metal, it starts to slowly eat away and corrode its unsuspecting host.

Nobody really knows where it will pop up next.

At first, the tiny implants of rust cannot be seen.

But underneath the layer of metal, the rust is at work, slowly devouring and eating away at the core of the metal.

Rust is like a weed. Whenever you notice rust, you might decide to cut it out, poison it, or do what ever you think is needed to prevent its return.

But once the rust is there and those tiny little seeds have shed and spread, then not matter what you seem to do, it seems to keep popping up everywhere.

Because it’s a silent process, it can often take years to become visible. But once it’s there and in full swing, it causes weakness, corrosion, toxicity and all manner of havoc for the piece of metal it invaded.

Rust is the master of stealth. Just because you can’t see it, it doesn’t mean it’s not there. Eventually, it will rear its ugly head.

Unknown to anyone, the rust has been busily working away underneath the surface, with its endless tentacles and teeth reaching out, eating at the very core of its host.

As the famous musician Neil Young once said, “Rust Never Sleeps”. It’s the perfect assassin, for it needs no sleep. It has a mission of destruction and chaos to whatever stands in its way.

Just as rust never sleeps, neither does endometriosis.

Endometriosis is like rust in a woman’s body. A pesky weed that spreads and drops seeds (implants) everywhere it goes, with a never-ending lifecycle. It may cause a woman pain, while silently and stealthily works away. Because it spreads without causing a single ounce of pain for a significant portion of the population, the underlying damage often goes unnoticed.

Endometriosis can cause havoc in other areas of the body, creating the illusion that something else is going on. Many mistakenly believe the problem is irritable bowel syndrome, bladder problems, a urinary tract infection or other health issues. This is because endometriosis invades without a trace, and is a master of disguise — evading even the most notable physician! But all the while, it’s been feasting and causing chaos under the surface — just as rust does.

Similarly to rust, sometimes you can cut out a small piece of endometriosis, removing every tiny part of it. Other times, you can cut it out, but the microscopic, undetectable implants just pop up somewhere else, beginning its vicious lifecycle in another location. Sometimes endometriosis can hide altogether. Other times it can be seen everywhere, scattering itself so far and wide in the body, that you’ll never ever catch up with all of it.

Something you may find surprising is endometriosis isn’t just found in the endometrial lining. It’s most often found outside the uterus, or embedded deep into the endometrium. It can attach to a woman’s tubes, her vagina, bowel, intestines, make its way up into the lung, around the pericardium and into the heart and brain. They’ve even found it in people’s fingers!

Endometriosis is truly like a weed. It can spread everywhere, yet still evade and trick the most noted of medical minds. If you don’t know what you’re looking for, it may evade you forever.

But just like rust, with the right treatment, endometriosis can identified and exposed, before being banished to the destructive world it appeared from.

Yet, many fail to explore or implement the right treatment, choosing to mask it or pretend it’s gone. All the while, it’ll continue to cause inflammation, fatigue and pain — and it can play with a woman’s emotions too. This can leave the host wishing life as they knew it would magically just end. This is the life of many who unknowingly trust that just cutting out the “rust”, or trying to mask the symptoms of it, will fix it. But you can’t fix it without destroying and preventing the tiny implants of what lies underneath the surface, so it wont re-appear and take hold again.

Like any disease, prevention is the key to treatment. Take away the fuel, and the fire will never light. This means taking away the foods and substances (alcohol, smoking and chemicals in the environment) that are fuelling endometriosis to grow in the first place.

What Should You Do If You Have Endometriosis?

If endometriosis is causing you issues, you need to have it cut out and removed. There is a point where no matter what medications or steps you take, nothing is going to settle the pain and inflammation down as effectively as investigative and corrective surgery. The only way you can diagnose endometriosis is via laparoscopy.

Scans and blood test do not diagnose endometriosis.

Even sometimes with surgery, endometriosis may be invisible to the naked eye. But make no mistake, it can still be there. This is why biopsies are taken, to see if the microscopic implants are still there, causing pain and havoc underneath he surface. But even then, it can infiltrate deep into the muscles and around the nerves, remaining undetectable — even via a biopsy. But at some stage, it will rear its ugly head. For those who know the symptoms, they will surely know it’s there, when all other measures of investigation fail.

Once the visible disease is found, it needs to be removed. Then you need to prevent its return. The only way you can do this is to suppress and then destroy the microscopic implants, and the very thing they feed off. Don’t make the mistake of thinking surgery is where all your treatment ends. It doesn’t. This is where the real work begins.

While estrogenic response is a known factor, we also know that insulin feeds inflammation. It also causes problems with estrogen and hormone metabolism and distribution. If you get your diet under control, reduce the inflammation (through lack of insulin and sugars), then you also help regulate the hormones, starving the endometriosis. You need to eat as clean as possible — and this means grain-free and no refined foods at all. Lots of proteins, nuts and seeds, fresh fruit and vegetables, good oils, pre and probiotics and water.

Herbal medicines (and other natural medicines and supplements) can also help to control and diminish the microscopic implants of endometriosis, as well as prevent its return. They can also help with hormone regulation and insulin resistance, while also helping to reduce inflammation. They are an absolute must, and this is why the Royal College of Obstetricians and Gynaecologists now recommends herbal medicines and acupuncture and part of the overall treatment plan in the guidelines of treatment of endometriosis.

You also need to look at stress and emotional factors that are driving the inflammation in the first place. Learn some coping skills, take up yoga, learn about meditation or mindfulness, learn to relax, find that regular quiet time, or do some form of relaxation. Do whatever it takes to find stillness in your daily life. You can’t treat a disease without looking at the emotional and lifestyle component of it as well.

So, before you go and try and mask the symptoms of endometriosis and the actual diseases itself, with the pill, Mirena, or other current medical approaches, ask yourself this: what are you doing to prevent the cause of the disease in the first place?

Endometriosis requires a multi-modality approach to get rid of it and prevent its return. If you don’t take this approach, then it will nearly always come back. Yes, you need surgery, but, you still also need to prevent and treat the actual cause of the disease in the first place. This will then treat the microscopic implants from ever coming to life, and causing more misery for everyone concerned.
But, just like with any disease, it also requires compliance of the patient too.

What are you doing to control your endometriosis?

Do you want to just mask it, or fix it for good?

If so, you need to implement a multi-modality approach as mentioned above, if you truly want to boot endometriosis out of your life forever.

How To Dry Up Breast Milk Naturally – 9 Easy Tips