Did The Food Pyramid Cause Our Obesity Crisis? 3 Major Mistakes Health Officials Made 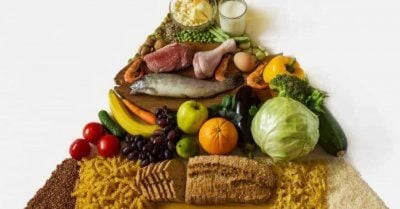 If you grew up in the US in the 1990s to early 2000s, chances are you saw the food pyramid everywhere.

Posters were hung in school cafeterias, food products were labelled with it, and pages in our health textbooks were devoted to the pyramid.

This ‘healthy eating pyramid’ was the cornerstone of everyone’s nutrition, and of nutrition education provided in schools.

Want to be healthy? Just base your diet on the easy-to-follow food pyramid – or so we were told. Decades later, we’re realising eating according to the food pyramid isn’t as healthy as we thought.

Did The Food Pyramid Cause Our Obesity Crisis? 3 Major Mistakes Health Officials Made

Even more worrisome, current research shows the pyramid might be one of the biggest culprits in the obesity and diabetes epidemic.

So, what went wrong? How did one of the biggest ever public health campaigns backfire?

After all, decades earlier a similar anti-smoking public health campaign had immense success.

What Is The Food Pyramid?

In 1988, public health officials in the US began research into the effects and potential causes of the rising rates of obesity and diabetes.

In 1992 they released a 700-page report containing new nutrition guidelines, which were illustrated in the food pyramid.

The most noticeable recommendations were at the top and bottom:

In the midst of rising obesity rates, it seemed to make sense to limit fat in order to control weight. This recommendation also coincided with the 1978 Seven Countries Study published by Ancel Keys.

The findings were in line with his diet-heart hypothesis, which suggested dietary fat – particularly dietary saturated fats and cholesterol – were major causes of heart disease.

In addition to those major recommendations, they also advised:

What research now shows, however, is the two major recommendations (limit fat and consume a lot of carbohydrates) could be a root cause of the current obesity epidemic.

Following the principles of the food pyramid didn’t reduce the obesity rate. In fact, obesity and diabetes continued to rise, despite the major public health campaign behind the pyramid.

The previous major health campaign in the US was the anti-smoking campaign. We quickly saw rates of lung disease and cancer associated with smoking tobacco decrease, as more consumers were educated about the risks of smoking.

The smoking campaign was simple. It said: Don’t smoke and you will reduce your risk of associated health problems.

The simple campaign had huge success, and health officials used it as the model for the dietary guidelines and food pyramid campaign.

As it turns out, however, nutrition proved to be a much more complex issue.

Health officials felt it was important to keep the food pyramid simple. The simplest way to educated consumers on fat was to recommend limiting fat intake.

What we now know about fats is they are essential to good health. They contribute to basic cellular structure, steroidal hormone synthesis, and nutrient absorption. The key is to consume abundant healthy, natural fats (including animal fats), and limit, as far as possible, processed oils and fats rich in omega-6

Although nutrition science has come a long way, it turns out the authors of the food pyramid were already aware of the differences between healthy and unhealthy fat. Even so, they decided to simplify the message and leave out that vital information.

You might think limiting fat couldn’t possibly create a problem. However, processed food manufacturers took the opportunity to use the guidelines and create a $35 billion dollar low-fat and no-fat food industry.

These low-fat and no-fat foods used the food pyramid fat recommendations to market their products as ‘healthy’.

When manufacturers removed fat, however, they still needed their products to taste good. Fat was therefore replaced with sugar and refined carbohydrates, which fuelled the obesity crisis.

Consumers believed they were making healthy choices while their waistlines continued to expand.

On a positive note, the American Heart Association (AHA) has recently moved away from recommending a low-fat diet. The 2015 dietary guidelines also removed the limit originally placed on dietary cholesterol.

Simply put, fat is a necessary component of our diet.

Our bodies need fuel to function. Carbohydrates are an excellent source of fuel. However, the big mistake the food pyramid made was, once again, to simplify a complex issue.

Like fats, carbohydrates can be healthy or unhealthy. Research compiled from 1988-1992 showed these differences, but health officials opted to keep it simple and did not differentiate between complex and simple carbohydrates.

Unrefined carbs, like vegetables, certain fruits, and some whole grains, can be part of a healthy diet. Refined carbs, such as processed white breads, white pasta, cereals and white crackers are easily broken down by our bodies and quickly converted to sugar.

Children could have a glass of orange juice, white toast with margarine, and a sugary breakfast cereal with skim milk and be well within the food pyramid guidelines.

But for their bodies, a meal so high in refined carbohydrates, simple sugars and highly processed oils was essentially a recipe for obesity, inflammation and chronic disease.

The lack of differentiation between unrefined carbs and refined carbs also fuelled the $35 billion dollar low-fat and no-fat industry.

Changes to recommended guidelines happen slowly when billions of dollars are at stake.

#3: The Food Pyramid And The Food Industry Contributed To A Massive Increase In Sugar, Carbohydrate And Calorie Intake

In theory, a public health campaign designed to reduce obesity and diabetes should lead consumers to eat fewer calories and less sugar.

However, the combination of oversimplified guidelines and the billions of dollars at stake, created the perfect storm of poor health for those who attempted to follow the food pyramid guidelines.

Today, compared with the 1970s, the average American consumes:

The simplified guidelines and the pyramid shape were deceptive in terms of what a healthy diet really looks like. The wide bottomed pyramid made the high carbohydrate diet appear necessary.

At the same time, health officials failed to educate the public about the big difference between processed carbs and healthy, unprocessed, unrefined carbs.

And the billion-dollar food industry certainly wasn’t going to differentiate between them for us.

The biggest problem with the food pyramid was in the way it was created. It was an attempt to oversimplify an extremely complex issue, and recommend a ‘one-size-fits-all’ approach to a healthy diet.

“The truth is, a healthy diet will look different person to person. We need to take into consideration medical history, pathology reports, gut health, immune health, personal health goals, physical activity levels and so much more, when deciding on a healthy eating protocol for someone.

However, what we do know is this:

Nutrition science is still a relatively young and evolving field. Since the 1960s, we’ve seen more than a million published studies related to nutrition. In 2013, 44,000 nutrition studies were published in the US alone.

Despite the many great minds studying nutrition science, we’re all still learning.

However, since the days of the food pyramid, we have definitely learned about the importance of differentiating between unrefined and refined carbs, and between healthy and unhealthy fats.