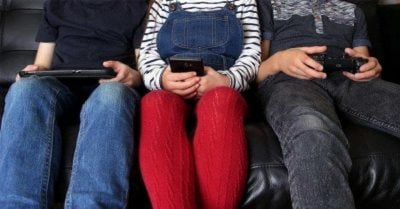 The online world is now an important part of everyday life and this is starting to impact the generation of young people growing up with social media.

Children aged five to 15 are spending 15 hours a week online, making it a major influence in their lives.

That’s more time than they spend outdoors, with three quarters of children aged 5 to 12 spending less than an hour playing outside each day.

Children’s Commissioner for England, Anne Longfield, spoke out in a recent interview and urged parents to try to limit how much time their children were spending online.

While it’s ok to let kids have the odd taste of junk food, it’s not something parents should be including with every meal.

Longfield has launched the ‘digital five a day’ campaign to encourage families to be mindful of how much time they spend online. The campaign focuses on:

Find out what happened when BellyBelly’s Kelly banned her kids from television and other screens.