Many women come into my clinic with symptoms of thrush and urinary tract infections. Naturally, they want an effective thrush treatment (or UTI treatment) which works fast. So I decided to write about it, so people can be informed about how to truly beat these two highly unpleasant conditions.

Like any health problem, prevention really is the best way to ensure optimum health and wellbeing, both physically and emotionally.

What I’m finding is there are a few simple misconceptions and poor dietary and lifestyle habits which are causing many women to develop thrush.

Thrush is the common name given to a vaginal yeast infection.

Vaginal yeast infections are caused by Candida, a type of fungus.

Candida lives in the gut most of the time, but it can be transferred to the vagina, causing an outbreak of thrush. Through dietary and other factors, the candida grows more rapidly and then causes inflammation and then infection.

This is what causes a yeast infection, which can also lead to urinary tract infections (UTI’s).

What Are The Symptoms Of Thrush For Women?

Vaginal thrush can cause severe itching, redness, a discharge which is usually white (often described as looking like cottage cheese), and sometimes pain or burning when passing urine (wee).

How Do You Get Thrush?

Many things seem to trigger thrush, such as being ill, stress, using antibiotics, and some types of the contraceptive pill.

Thrush that keeps coming back may be a sign of diabetes or insulin resistance. Therefore, a low carbohydrate diet and restoring proper gut flora and function is very important.

However, a thrush infection begins in the gut, with a candida overgrowth. This is caused by poor diet, in addition to the other triggers mentioned above.

Which Probiotics Are Best For A Yeast Infection? 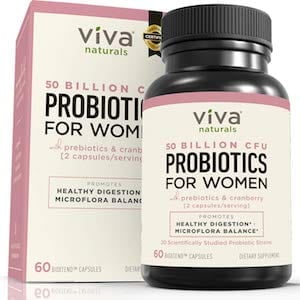 It’s very important to replenish the gut flora with both a high potency prebiotic and probiotic daily. The NCFM strain of Lactobacillus acidophilus is the most scientifically validated therapeutic strain to be discovered. It has a proven track record for surviving the gastrointestinal tract, as well as bile tolerance, adherence, and colonization.

But before you start adding in the good bacteria (probiotics) and begin eating the right foods for the good bacteria to grow, it’s essential to clear any microbes and bad bacteria first. At the same time, you also need to repair the gut lining.

What Is The Treatment For Thrush?

The conventional treatment is usually a cream or pessary (dissolving tablet) which is placed in the vagina daily for up to a week. A treatment in the form of a tablet, such as Nystatin (some strains are becoming resistant to this) and Diflucan can be used as well.

The problem with some of these tablet treatments is while they are designed to kill the bad bacteria in the gut that causes thrush, they can also kill the good bacteria. This then leads to the gut flora being susceptible to further growth of Candida.

Basically, it means you are worse off than when you started – and who wants that?

The way Chinese and complementary medicine would treat these conditions is to treat the root cause, not just the symptoms. It makes much more sense to treat what’s causing the problem in the first place, rather than having to treat recurrences in the future.

Firstly, we have to rid the body of the micro-organism causing the thrush in the first place. In my clinic, I use powerful antimicrobial herbs that help remove gastrointestinal organisms which may contribute to gut inflammation and permeability. These herbs are also particularly potent against microbial infections.

At the same time, we would use a combination of Chinese herbs to rid the body of the cause of thrush and treat the symptoms at the same time. All treatments may need to be taken for weeks after symptoms have gone, and also as a prevention. Sometimes we make a herbal vaginal wash to assist any acute symptoms.

All of this is also done alongside a strict sugar-free and grain-free diet, which is higher protein.

After the thrush is addressed, we then have to replenish the gut flora.

I use specially selected Chinese herbs to restore the gut and digestive function, as well as using prebiotics and probiotics, as mentioned earlier. This all needs to be done in the right order and combination to be 100% affective.

How do you treat thrush with yoghurt? You don’t.

Many people recommend eating yoghurt when you have thrush.

However, there are not enough probiotics in yoghurt to fix or reverse the problem, let alone address the root cause. Many yoghurts are also sweetened, so you could be making the problem worse.

Also, be careful of supermarket probiotic drinks such as Yakult, as they’re often loaded with sugar. When looking at nutrition panels, always keep in mind that one teaspoon is around 4 grams. If a processed food contains 16 grams of carbs or sugar, it’s effectively 4 teaspoons of sugar. These foods or drinks will feed thrush.

You might read suggestions for putting yoghurt on a tampon overnight. However, studies show this is ineffective, and the probiotics which are best for thrush and vaginal health are not found in yoghurt.

How To Prevent Thrush

Diet must be addressed to help prevent thrush. Grain free/paleo/low carb/primal is what I recommend to all my patients. This is because candida and other bacteria thrive on sugars and yeast, so these need to be omitted from the diet as much as possible.

Natural sugars in fruits are fine, but in very limited amounts. Choose the fruit you eat based on this helpful article from Diet Doctor.

You will also need to address your stress levels. High stress leads to poor health and disease. When you are stressed, you are most likely to become run down and susceptible to infections, such as thrush and UTI’s.

Thrush is not a sexually transmitted disease, simply an overgrowth of yeast.

If the thrush or UTIs come back, it’s advisable to treat sexual partners. It’s important to not self-diagnose yourself with thrush. Make sure you get tested by your healthcare professional to make sure it’s actually a case of thrush, and not another infection or problem.

In males, thrush occurs more often on uncircumcised men than circumcised men. Keeping the penis clean (and dry), by washing under the foreskin and using anti-fungal creams can usually control this.

How Do I Treat Thrush At Home? 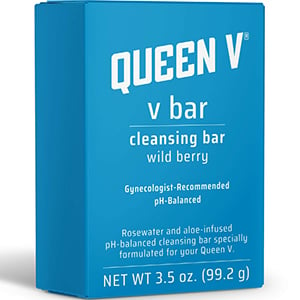 Washing the anal-vulva area daily with a washer and a low pH soap or body wash such as the Queen V bar or The Crown Choice Bodywash (plant-based) is essential.

Water alone is not enough to get rid of any bacteria.

When you wash your hands, you don’t use water only do you? The old school of thought was that perfumed based soaps can make thrush and UTI’s worse – but we now know that is not true.

Another good practice that has been thoroughly researched is using salt water washes around the anal-vulva/perineum area twice per day after showering. The salt water helps wash away and kill off any leftover bad bacteria. You can do this by using a cup of rock salt in a small bowl of water, washing the anal/vulva/perineum area.

With thrush, avoid tight fitting pants and nylon pantyhose. These bring about the warm, moist conditions that yeast loves. Cotton underwear is the healthiest option.

Getting out in the sun and letting sunlight and air onto the vaginal/perineum area can also help.