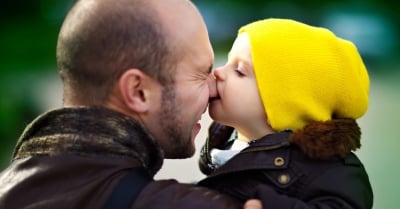 Hey dads and dads-to-be: in case you weren’t aware, the social dad revolution is well underway!

There are a growing number of dad and dad-to-be bloggers, educators and supporters, so it’s time to get on board (and have some laughs along the way).

No matter if you’re after humourous, educational or supportive Facebook pages, rest assured, we’ve got you covered.

So make sure you give all these pages a like, and you’ll be totally sorted *cough* dad of the year *cough*.

Here are some really cool Facebook pages that you really need to frequent, in no particular order:

Becoming Dad is a place for expectant and new fathers to be engaged, educated, mentored and supported during pregnancy, as they prepare to be present at birth, the role of fatherhood and the transformational changes that they will experience in their lives as men, partners and fathers.

Becoming Dad was created by one of Australia’s leading expectant and new dad specialists, Darren Mattock, in 2008.

Becoming Dad also has a private, closed page for men only.

It’s everyone’s favourite (and hilarious) Kiwi dad, at How To Dad.

Consisting of loads of funny videos on how (or how not) to be a dad, you’ll laugh until your sides hurt. In fact, he’s even got a book coming out, so he must be that good, right?!

Life of Dad is a social network for dads. It was created by Tommy Riles, who has been the warm-up comic for the show, Ellen, for over seven years. So he’s well equipped to handle fatherhood with all it’s humourous — and not so humourous — moments. What initially began as a blog where Tommy would post daily updates on his daughter’s health problems (which led to appearing on the Ellen show) exploded and became a fully blown social support network for dads.

The Good Men Project is a community of modern, thinking people, tackling the issue of men’s roles in modern life. They explore the world of men and manhood in a way that no media company ever has, tackling the issues and questions that are most relevant to men’s lives.

The Good Men Project write about fatherhood, marriage, sex, ethics, war, gender, politics, sports, and aging. Nothing is off limits. The content they post swings from funny, serious, provocative and thoughtful, earnest and light-hearted. The Good Men Project believes in letting guys be guys, while challenging confining cultural notions of what a “real man” must be.

Another humourous dad blog to add to the list: Dad and Buried. Mike Julianelle is the creator of Dead and Buried — a thirty-something Brooklynite, writing about his experiences as a father. From his website:

“I’m learning to deal with life as a new father and bitching about the ways the newfound existence of my son – not to mention the myriad responsibilities surrounding that existence – is destroying my social life.

This blog will serve as a continual diary of my experiences. First as a new father and – soon – as an expert parent with the world’s first and only PERFECT CHILD. Expect some pictures, maybe even a video or two. And lots of swearing. Tons. But rest assured, I love my wife, I love my son, and no matter how much I may bitch about the new addition, I still…um, I still…

I forgot what I was going to say.”

The Peaceful Papa is a blog about a father’s journey through gentle and attachment parenting — something which research is increasingly proving what we already know at BellyBelly: that we need to go back to these parenting methods we once used.

Even if you’re not sure about what style of parenting you feel comfortable with, you’ll get real-life accounts of how dads can support this growing important trend in parenting.

How To Be A Dad is a popular blog and entertainment source all in one! Run by Charlie Capen and Andy Herald — two sleep-deprived dads from Southern California — who are figuring out the dadhood thing with their respective families.

They’ve been featured in many prominent news and parenting publications and have provided many laughs for dads (and mothers!) all over the world. The memes they create are hilarious — you may have even seen them floating around already.

They promise to confess their mistakes so you can laugh at them.

#8: The Adventures of Captain Dad

Captain Dad is the captain of a small, three bedroom apartment, with his first mate and four deckhands. They are modern day explorers, seeking new places and new things to try. The Captain Dad family — err I mean crew —  believe in loving deeply, laughing loudly, hugging as often as possible, and keeping the music loud as you rock on through life.

Captain Dad knows that navigating the world of fatherhood, or parenting for that matter can be quite challenging. There are so many ways to get lost, sometimes so lost there appears to be no way out. However this brave Captain offers to be there to answer any questions, to provide good ways to save money and impart fun ways to teach your kids, tips for parenting, and marriage dos and don’ts.

You’ll enjoy his riveting rants and hilarious antics of Captain Dad’s life as a husband, and father of four.

Founded in 2003, The National At-Home Dad Network is a non-profit corporation that provides support, education and advocacy for fathers who are the primary caregivers of their children. One of their proudest mottos: “Dad’s don’t babysit. It’s called ‘parenting’.”

The National At-Home Dad Network regularly post news articles, memes and other content about fatherhood and being a dad. They host an annual convention and are featured in prominent publications like the New York Times.

#10: Adventures of the Baby Wearing Daddy

Dads… you gotta get baby wearing. Not only because it’s great for babies, but mammas love it too! Many mothers will admit to their partner that they find it sexy when you wear the baby. What are you waiting for?!

On Adventures of the Baby Wearing Daddy, you’ll get humour and a little seriousness about the adventures of a father who loves baby wearing — he even has a carrier stash! You can even send in your own photo for baby wearing dad of the week. Come on dads, get baby wearing — we really want to see it!

So, there you have it — 10 of our favourite Facebook pages for dads. Which one did you like best? Let us know in the comments section below.

Adorable Baby Horrified At The Taste Of Avocado

Adorable Baby Horrified At The Taste Of Avocado