Faint Line On Pregnancy Test What Does It Mean?

Are you staring at a faint line on a pregnancy test, and aren’t sure what it means? Sometimes the results of home pregnancy tests can leave you feeling pretty confused.

This is especially true when one of the pregnancy test lines is faint. Many women wonder whether seeing a very faint line is a positive result or a negative result.

When you’re hoping for a positive pregnancy result, a faint line on a pregnancy test can be really frustrating.

It can bring on worries about miscarriage or other concerns about not conceiving.

Read on to find out what a faint line on a pregnancy test really means.

A home pregnancy test (HPT) is an easy and very accurate way to find out whether or not you’re pregnant.

If you’re new to home pregnancy tests, here’s what the test lines mean. Once you take the test, one of two things will happen. You will get either:

If you get no pregnancy test lines showing up at all, the test is faulty, and you should take another test.

Most pregnancy tests on the market today are very sensitive. They can detect pregnancy much earlier than the tests of the past.

A pregnancy test detects the pregnancy hormone, human chorionic gonadotropin (hCG), in your urine. This is a hormone produced by the fertilized egg (called a blastocyst at this early stage) after it implants into the uterus.

The amount of human chorionic gonadotropin needed varies from test to test. Some tests detect hCG levels as low as 10 IU/ml.

Exactly when hCG can be detected really depends on each individual woman. The numbers below, however, are typical of most pregnancies.

Remember: these figures refer to the number of weeks from your last menstrual period:

Sometimes the line on a pregnancy test might be so faint as to be almost invisible. But often, it’s definitely a faint positive test result, just like these below.

Can you see the very faint positive lines? 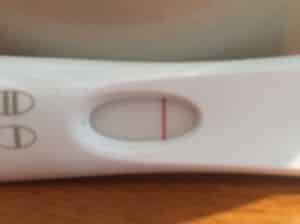 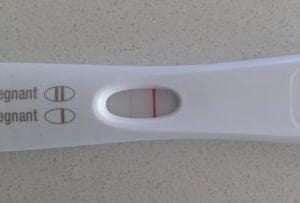 What does a faint line on a pregnancy test mean?

HPTs are designed to pick up a specific pregnancy hormone in your urine.

Faint lines on a home pregnancy test are telling you hCG has been detected, so you are pregnant. Most tests are designed to look for any amount or level of hCG. At the very early stages of pregnancy it’s possible to find an extremely faint line. When this happens you can consider it a faint positive pregnancy test result.

Most women prefer to be absolutely certain and want to see a darker line on their pregnancy test.

Remember, implantation happens usually about a week after sperm fertilizes an egg. It can take longer, however – even up to 12 days after fertilization. You might also have ovulated later than you thought.

The longer you wait after implantation, the higher your hCG levels will be.

The more pregnancy hormone present in your urine, the darker the line you will see on your pregnancy test.

Once you have a positive pregnancy test, you can work out your estimated due date with BellyBelly’s Due Date Calculator.

Even the faintest of lines signals the detection of the pregnancy hormone, hCG, which can be detected after you have conceived.

You might want to re-test in the coming days, ideally upon waking in the morning. If the positive line continues to get darker, then you’ll have even further reassurance that you’re pregnant. A blood test can further confirm your result if feel you need to.

Read more in our article Early Signs Of Pregnancy – 9 Signs You May Be Pregnant.

Can a faint line mean I’m not pregnant?

Although home pregnancy tests are quite accurate most of the time, in some situations you might get a faint line on a pregnancy test, but normal pregnancy will not eventuate.

The most common reasons are:

How to avoid a false positive result

It isn’t very common, but a false positive pregnancy test result can sometimes happen. This is usually due to user error rather than anything else.

Make sure you’ve followed the instructions properly. Taking the test too early might result in a false positive or false negative.

It’s always best to wait, at least until the time you expect your period. Often women re-test frequently, in the hope of getting a more concrete answer.

Your hCG levels fluctuate during the day and can depend on how diluted your urine is.

That’s the reason why most pregnancy test instructions suggest you test in the morning, when you wake up.

If you leave the test in your urine for too long it can also skew the results. And definitely don’t read the test after the allotted amount of time.

It’s possible that what you think is a positive test result might actually be an evaporation line, or ‘evap’ line.

An evaporation line is a faint line that appears after a negative pregnancy test has dried.

Tests that show two line results have what are known as ‘indent’ lines where the ink pools.

As the ink moves across the results window, it will collect in one or both of these indents.

Sometimes, as the test dries and the urine evaporates, it leaves a faint colorless line in the indent.

How to avoid a faint line

The best way to avoid the frustration or disappointment at getting a faint line on a pregnancy test is to:

Faint line on pregnancy test not getting darker

However, this isn’t necessarily the case.

A home pregnancy test will most likely be darker when your urine has high concentrations of hCG.

Taking multiple tests to check the color of the line, however, isn’t a reliable way to check the progress of early pregnancy.

The concentration of hCG fluctuates during the day, depending on how much fluid you’re drinking and how often you urinate, as well as other factors.

If you’re concerned, speak to your healthcare provider, who will arrange for you to have blood tests to monitor hCG levels over a period of time.

If you see a faint line on a pregnancy test after you’ve had an embryo transfer, congratulations on your positive pregnancy test!

When you go through IVF, you’re usually very aware of the dates and the times things should happen – especially how early you can take a pregnancy test.

If you have a faint positive pregnancy test, contact your IVF doctor.

Faint line on pregnancy test and spotting and cramping

Conception usually occurs 2 weeks before your missed period. Implantation of the embryo into the uterine endometrium (the part in charge of nurturing the embryo that gets shredded with every menstruation) usually happens around 10 to 14 days after conception.

Many women usually take pregnancy tests after a missed period. When implantation occurs, sometimes is accompanied by cramping and spotting and the pregnancy continues just fine.

However, cramping and spotting could also mean a very early miscarriage.

If you experience spotting and cramping after a faint positive line in a pregnancy test result contact your healthcare provider who will be able to provide the best advice.

Q: What should you do to not get a faint pregnancy line test result?

A: If you don’t want to experience the disappointment that a faint pregnancy line test result can bring, then schedule your pregnancy test after your period didn’t arrive, and not before. Also, when you do a test, do it first thing in the morning.

Q: How does one get pregnant with a boy?

A: If you’re trying to get pregnant with a boy, here are two popular tips couples follow. One is to eat foods with a higher potassium or sodium content. The other is to have intercourse on the day before your ovulation occurs, to give male sperm an advantage.

Q: When should babies talk?

A: Babies should start to talk when they’re between 11 months and 14 months. The first words they’re commonly are able to say at this age are ‘mama’ and ‘dada’.

Q: Is tea bad during pregnancy?

A: Are you wondering if you can continue your tea habit during your pregnancy? Well yes, you can continue. However, safe herbal teas are best. Teas that contain caffeine are to be avoided during pregnancy, as they can impact the birth weight of the baby.