Could Your Toddler’s Diet Be Keeping You Awake At Night? 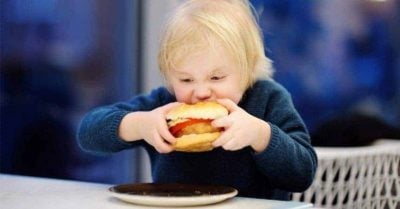 Yes it’s true: our baby or toddler’s sleep patterns can be affected by his diet.

Restlessness can be caused by allergies or food intolerance, sometimes to foods passing through your breast milk (your baby is never allergic to your milk).

In one study at a UK sleep clinic, 12% of thirteen-month-old infants who presented with persistent night-waking for which no other causes were found, were taken off all milk products when cow’s milk intolerance was suspected.

In most of these children, sleep normalised within five weeks, with night-time awakenings falling to nil or once per night.

A subsequent milk challenge (double blind) induced the reappearance of insomnia and, after a year, when the challenge was repeated, all but one child reacted as before.

The best way to protect your baby from allergies is to breastfeed exclusively for the first six months. If you are bottle-feeding and suspect allergies, consult your doctor. There are hypo-allergenic formulas, but these are expensive without a script.

Food allergies in exclusively breastfed babies are caused by foods that pass into your breast milk, not to your breast milk itself. Allergies in infants may cause symptoms including colic, nausea, vomiting and reflux, wheezing and respiratory congestion, dermatitis, eczema, and various rashes (although other medical causes should be ruled out for these symptoms).

Because babies may be sensitised to foods in utero, it is wise to avoid non-essential foods that are common allergens and eat others in moderation during pregnancy and for the first year after birth if you are breastfeeding. The most common culprit is cow’s milk protein (found in milk, cheese, yoghurt).

Other foods that may cause allergies are peanuts, eggs, soya products, fish, wheat and citrus. However, reactions to foods seem to vary widely among individuals. Some sensitive babies react even to small amounts of certain foods in their mothers’ diets, so allergy symptoms (including frequent night waking), can be alleviated by the elimination of offending foods from the mother’s diet.

Food additives are present in ever-increasing numbers in almost all processed foods and these can dramatically affect sleep patterns and behaviour.

Some babies and children can also become restless after eating foods containing salicylates. These are naturally occurring chemicals which are found in otherwise healthy foods such as broccoli, grapes, apples, oranges and tomatoes as well as in some processed foods.

Tracking down offending foods in your child’s or your own diet may take some effort, especially for already exhausted parents, but in the long run it could gain you more sleep. If you think that sleeplessness may be related to foods in your diet passing through your breastmilk, keep a notepad handy and jot down your baby’s crying times and what you eat to see if they are linked.

If there appears to be a ‘cause and effect’ between foods in your diet and your baby’s crying, an inexpensive and simple solution is to eliminate the suspect food for at least a week, preferably two weeks.

If your baby’s sleep patterns improve, you can either be thankful and avoid the suspect food, or you can reintroduce a small amount of the food into your diet – if the night-waking or allergy symptoms re-occur, you can be pretty certain you have ‘nailed’ the culprit.

Elimination of foods may take anywhere from a few days to several weeks to make a difference to your baby’s behaviour so allergies are difficult to prove or disprove, but if it calms your baby (and you), modifying your diet is a small sacrifice.

If you are bottle-feeding and suspect an allergy to dairy foods, it is not necessarily helpful to race out and buy soy milk formula, for instance, since about 50% of infants who are allergic to cow’s milk protein are also allergic to soy bean protein.

But then again, your baby might be in the percentage that is helped! You could try changing your baby’s formula for a week and see if it makes a difference. Hypo-allergenic formulas are available but these are expensive and are reported to taste foul. Consult with your baby health nurse and/or your doctor before changing formula.

It can also be difficult to pinpoint food additives that are affecting your child’s sleep, as reactions are not necessarily immediate and may take up to forty-eight hours to present, although many parents do notice restlessness and hyperactivity after events such as eating at fast-food restaurants.

After keeping a food diary, one mother tracked her toddler’s subsequent misbehaviour and sleeplessness to the days at childcare when he ate pasta laden with tomato sauce. Several other parents worked out that their older babies’ sudden wakefulness was related to their eating grapes.

Sometimes, sleep will be elusive without major dietary changes but in other cases it will just be a matter of balance, perhaps taking care not to overload on certain foods that seem to affect your child.

A good guide to sensible eating is to include a wide variety of foods in as close to their natural state as possible. This means eating fresh vegetables, healthy fats, fish, meats and free-range eggs, and drinking water, instead of filling your supermarket trolley with frozen chicken nuggets, snack bars, coloured yoghurts and juice boxes, could see you and your little ones all sleeping more soundly.

If you find the thought of changing your diet overwhelming, seek help from an appropriate professional such as a nutritionist.

Artificial Feeding – Nothing To Do With Breastfeeding