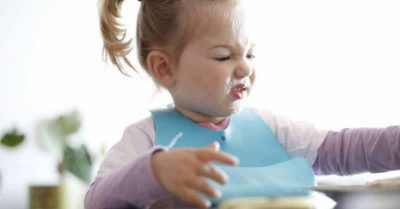 A lot of confusion arises around feeding as your chubby baby becomes a toddler: although he is now very active, the rapid growth of your toddler’s first year will slow down and his appetite may decrease accordingly. He will also be so busy exploring his world or playing with his toys and practising his new physical skills that he may simply have better things to do than stop and eat.

As well as less interest in food, your toddler’s limited concentration span will mean it is unrealistic to expect him to sit at a table for a three-course meal (unless it can be eaten in minutes!). His eating behaviour will seem erratic as his appetite tends to fluctuate from day to day ” he may have an ‘eating day’ followed by several days when he seems less hungry. Also, in the second year it is common for little ones to use food (or refusal of food) to assert their developing independence.

Because of your toddler’s small appetite, it is important to make sure that the foods you do offer are not ’empty’ fillers that will affect his appetite for more healthy food (and no, tomato sauce doesn’t count as a vegetable!). Try to include a wide variety of foods in as close to their natural state as possible. This means eating fresh fruit and vegetables, whole grains, fish, meats and free-range eggs, and drinking water or milk, instead of filling your toddler with processed foods such as chicken nuggets, coloured ‘yoghurts’, biscuits, flavoured milk or cordial. But don’t stress about every morsel that your child eats because he hasn’t had a required daily intake or sampled every food group in a single day.

Remember, you can’t worry your toddler into eating ” your anxiety is more likely to have the opposite effect. However, if you do feel concerned about your child’s eating patterns, try keeping a food diary for a week. You may be pleasantly surprised to find that over a week he is eating a reasonably healthy amount and variety of food.

Fussy Toddler Tip #1: Turn off the television while you eat

Fussy Toddler Tip #2: Adapt food from family meals or at least prepare foods for your child that you will enjoy if he doesn’t eat up.

If you haven’t slaved over a hot stove for hours preparing tiny gourmet meals, you won’t feel personally rejected if your tot turns his nose up at them. Or try a slight variation: if your child doesn’t like rice try couscous; if they won’t eat pumpkin or carrot, try blending it into a risotto.

Nutritious snacks are important for busy little bodies who don’t manage three big meals a day. Healthy snacks will help prevent mood swings and difficult behaviour due to low blood sugar levels. Take snacks and a water bottle when you go out so you don’t resort (too often, at least) to junk food to appease hungry tots.

Your child can feed herself independently by choosing what and how much she eats if you allow her healthy choices such as pieces of soft fruit, bread or small sandwiches, lightly steamed or grated vegetables, or cheese segments.

Fussy Toddler Tip #5: Introduce new foods one at a time

Its a good idea to serve a new food along with some familiar ones, gradually increasing the amount of the new food. You can keep an eye out for allergies or other adverse reactions (diarrhoea, sore tummy) by changing your toddler’s diet slowly.

Fussy Toddler Tip #6: Encourage your toddler to feed himself, praising him when he manages to get food onto his spoon and tries to eat it

You may need to have two spoons (one for you and one for your child) for a just-turned one-year-old so that you can put some food into his mouth between his own sloppy attempts. If he loses interest in the spoon (read, throws it overboard) continue feeding him yourself until he signals he has eaten enough. As your child ‘gets it’ and tries to feed himself, gradually decrease the amount of help you give him ” it will be messy at first but he needs practice to become an independent eater.

Fussy Toddler Tip #7: Encourage your child by praising her when she sits still in her highchair.

It is common for one-year-olds to go through a stage of hating to sit still, so you will need to have food absolutely ready before you attempt to seat her and try distracting her by drawing her attention to the food, her spoon or candles on the table before she starts her ‘performance’. She may also feel more included rather than trapped in her chair if you remove the tray of the highchair and push her up close to the table.

Fussy Toddler Tip #8: Don’t put too much food on your child’s plate.

Try to make food look attractive and fun by doing simple things like serving half a kiwifruit in an egg cup, cutting sandwiches into shapes using cookie cutters, or asking children to choose something of each colour (as they name it) from a platter. You might like to arrange the food on your platter into a face or animal shape, using egg, sultanas, carrot sticks, cheese cubes and so on.

You can do this by lighting candles or having a picnic ” in the backyard, in the park, with friends, on long trips or inside on cold or rainy days.

She could break vegetables, add herbs, stir and taste ” if you are preparing healthy foods it really doesn’t matter if some is eaten before she gets to the table.

Fussy Toddler Tip #11: Try not to encourage negative behaviour by laughing or fussing if your toddler spits or throws food or tries to stand on her chair.

Remove the food until she settles down and if she refuses food and begins to play, assume that mealtime is over, wipe her hands and take her out of her chair.

Baby Engaged | Meaning, Symptoms And When It Happens