Do It MY Way! When Daddy Does It Differently… 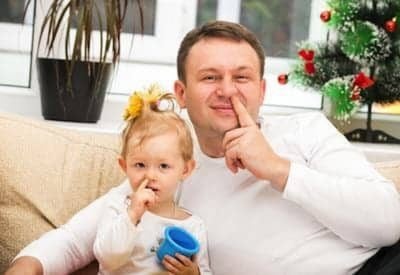 Before motherhood, Tania Delahoy worked as a medical scientist. She says, “at work, I had to be totally organised ” everything had to be set up to go in an emergency. My whole identity was about being completely in charge. Then I had Jessica and she screamed and screamed with colic. I felt completely out of control.”

Now, Tania’s first colicky baby, Jessica, is a happy four year old. Her second baby, Charlotte, is almost one. Tania grins as she sits on the floor strewn with toys, comparing her attitude towards mothering this time around. “I tried so hard to be the perfect mother with Jessica ” I was absolutely pedantic about dressing her. All her outfits matched and were spotlessly clean. This morning, when I dashed to the shops with poor little Charlotte, the knees on her jumpsuit were grubby from crawling and I realised I had ducked out without even washing her face. I used to diligently read three books to Jessica at the same time every day because I had read that’s what good mothers do but Charlotte just pulls books from the shelf and babbles to herself.

Down with Super Mum!

As Tania discovered, it isn’t easy to resist the pressure to be seen as a perfect parent and this easily extends to trying to control our children’s behaviour. Psychologist and mother of three young children, Betty Chetcuti advises that trying to control children’s behaviour can backfire. For instance, when parents try to impose a super-tight routine, or worry that others are measuring their parenting skills by their children’s behaviour, the anxiety and frustration involved can result in children getting the opposite message – that mum isn’t in control – so they are less likely to comply.

Betty claims, “we can be assertive without the stress of high expectations. It takes confidence to parent your own way and to admit, I don’t have all the answers but I will work it out.” Practical strategies such as breathing deeply or taking ten seconds to think and move things in a different direction can help and according to Betty, trying to understand the child’s emotions and noticing the positives ” looking for five positives for every negative – rather than reacting to the behaviour, can shift your reactions and help you become more in tune with your child.”

For Tania, letting go has been a gradual process. She says, “it is in my personality to be a control freak but I can accept that and work with it. I am still fairly controlling about Jessica’s behaviour but I have learnt to pick my battles and I acknowledge that these will be different in each family. I recognise that being organised reduces my stress levels but I understand what ‘surrender’ means now: it doesn’t necessarily mean ‘being slack’ or ‘giving up’ but is more about changing priorities and not worrying about things that don’t really matter. I used to be terrified that unless I kept on top of things and was totally organised, everything would fall apart. This included personal things like Jessica’s baby book and even the ironing – if the ironing basket was full, my stress levels soared and I panicked that I would never wear ironed clothes again. Now, I am able to accept help from other people without feeling that I am inadequate ” or that they mightn’t do things to my standards. My in-laws have been much more involved since I had Charlotte and that’s because I am happy to ask them for help and to let them do things their way. I can even relax and feel grateful that at least the floor is cleaned once a week even if the cleaner doesn’t do things as well as I would “I lost a few cleaning ladies because I complained too much.

Daddy Does It Differently

It isn’t only cleaners who can get a short shift when they don’t meet the exacting expectations of a control freak mummy. Fathers too can bear the brunt when they don’t do things just right. With a new baby though, this isn’t necessarily due to dad being slap dash. Instead, it can be due to ‘mummy lioness’ hormonal effects that begin brewing even before baby arrives. During the last trimester of pregnancy, women’s bodies begin to concoct a potent cocktail of hormones that includes oxytocin, the love hormone and prolactin which is often referred to as the ‘mothering hormone’ because it promotes maternal responsiveness. The effects of this ‘chemistry of attachment’ which is boosted by a natural birth and enhanced by breastfeeding, is so well recognised that scientists have labelled it as ‘the motherhood mindset’ or ‘maternal pre-occupation’. Although this potent ‘mummy margarita’ and the all-consuming nurturing behaviour that it generates is designed for infant survival, it often results in super protective behaviour by mothers that can make fathers feel relegated to the rank of apprentice.

Simply being aware of your biological drive (or your partner’s, if you are a father reading this) to care for your baby, can be enough to help you share parenting without attacking each other or implying that the non-birth partner or other family members, such as grandparents, may somehow ‘mess things up’ if they share care, especially if they do things a little differently. The downside of excluding fathers from baby care is that if a man feels less than competent, he will most likely disappear to a place where he does feel in charge, such as his workplace. Soon, working late becomes a legitimate excuse for him to avoid confrontation and so a vicious downward spiral of non-involvement wit his child begins. On the other hand, the more involved a father is with little ones, the more his confidence soars and the better his connection with them becomes. And, with a little encouragement and respect, he may even start to do some things ‘your way’.

9 Ways Independent Birth Classes Can Help You Get Better Results

Caesarean Section or Vaginal Birth – What Difference Does It Make?

Caesarean Section or Vaginal Birth - What Difference Does It Make?