Meconium Ileus | What Is It And What Causes It? 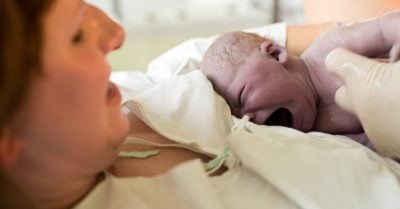 After giving birth to your adorable baby, there are plenty of things to get used to.

Things like finally seeing what color hair she has, or checking out his weight and length.

And learning the ropes as a new mother.

However, you might be surprised to find you’re still waiting for something.

Your care providers will be very interested in the arrival of your baby’s first poo!

The timely passage of your baby’s first poo (meconium) is the hallmark of a healthy newborn.

If it doesn’t arrive by a certain time, it can indicate a potential problem.

Premature babies are usually a little slower to pass meconium. If your baby is full-term, a delay could point to a condition called meconium ileus.

What is meconium ileus?

Meconium ileus (or MI for short) happens when the meconium in your baby’s bowel is thicker and stickier than usual. This causes the bowel to become blocked at birth.

Meconium ileus is an extremely rare condition. It only affects 1 in 25,000 babies and accounts for up to 30% of newborn bowel obstructions.

Usually, the bowel isn’t damaged. There’s just a backup of the contents inside, which obstructs anything that’s trying to come out.

Below the blockage, the large intestine (colon) is smaller than usual, as it’s not being used. It could be empty or contain small pellets of dried meconium or mucus from the intestinal lining.

Meconium ileus usually becomes obvious within a few hours or days following birth. Most signs of MI will appear fairly soon after birth, normally once breastfeeding is underway.

The most common signs of MI are:

How is meconium ileus diagnosed?

If your baby is showing any of the symptoms described above, your doctor might suspect meconium ileus and will organize tests to investigate.

Usually, the first test is to x-ray or ultrasound your baby’s tummy. This will show whether there’s a blockage and where it is.

Before the X-ray, a special dye needs to be placed into your baby’s rectum. The dye can be seen on the X-ray as it travels through the large intestine or colon.

The blockage from the meconium ileus is formed high in the small intestines and the X-ray might show loops in this area. It can also show what looks like soap bubbles inside the intestines; these form when air mixes with meconium.

Meconium ileus is either simple or complex:

Your doctor will need to identify the type of MI so the right treatment can be planned for your baby.

Can meconium ileus be diagnosed in pregnancy?

Most cases of meconium ileus are discovered in the first couple of days after birth. Occasionally, pregnancy ultrasound can pick up changes that suggest meconium ileus.

If the pregnancy ultrasound indicates your baby’s intestine could be blocked, your doctor will refer you to a specialist hospital that has a neonatal intensive care unit (NICU) and a pediatric surgeon.

A specialist team will monitor your baby during the rest of your pregnancy and after birth. You might have more frequent ultrasound scans to assess your baby’s condition as the pregnancy develops.

How are infants with meconium ileus treated?

When the baby is born, if meconium ileus or bowel obstruction is suspected, your doctor will recommend the following treatment plan:

Simple meconium ileus is usually treated without surgery. It’s possible to dissolve the blockage by inserting a soft tube (or enema) into the baby’s bottom, with the guidance of an X-ray.

The enema will soften and hydrate the stool, making it easier to move. After this treatment, babies usually start to pass meconium stools within 24-48 hours.

Enemas have a success rate of about 60%. They can also be repeated if needed.

If an enema is unsuccessful or complex MI is present, your baby might need a surgical procedure called a bowel resection. This surgery is performed under a general anesthetic.

In a bowel resection, a part of the small intestine is brought out to the surface of the abdominal wall. This creates an ileostomy – an opening where intestinal waste can collect in a pouch. This is temporary, and the bowel is reconnected once the blockage is gone.

This surgery seems scary but the aim is to remove the blockage and preserve as much of your baby’s healthy functioning bowel as possible.

After surgery, babies are given pain relief to keep them comfortable, and antibiotics to reduce the chances of infection. They might also be given special medications to prevent any further blockages.

Breast milk or formula feeds can be reintroduced slowly once the blockage is gone. If there has been severe damage to the bowel, further treatment might be needed to support your baby’s growth and to promote healing.

Although MI can be associated with other conditions, it’s most commonly seen in babies who have cystic fibrosis (CF).

Cystic fibrosis is an inherited disorder that causes sticky secretions to build up in the lungs and the digestive system.

Research suggests about 80-90% of babies with meconium ileus will have CF. Once your baby’s blockage has resolved, your care provider will recommend testing for cystic fibrosis.

Screening newborn infants for cystic fibrosis is very important. An early diagnosis leads to intervention that can delay or prevent serious health problems related to CF.

The heel prick test screens for CF, among other conditions, and is usually performed in the first few days of birth.

Getting the results from this type of screening can take weeks, however, so there are quicker forms of testing for CF. One example is the sweat test, which measures the amount of salt in sweat. The levels are abnormally high for someone with CF.

The sweat test can be done as early as 48 hours after birth, but many infants with MI might be too unwell for this test to be performed.

Blood tests can also check if your baby has the gene that causes cystic fibrosis. Genetic testing will also show whether your child is a carrier for CF. This is important, as CF is an inherited condition.

The American College of Obstetrics and Gynecology (ACOG) recommends all women of reproductive age are screened for cystic fibrosis as part of preconception and pregnancy care.

If pregnancy ultrasound shows signs of meconium ileus in a mother who isn’t a CF gene carrier, then the risk of her child having CF is lower compared with parents who are known CF gene carriers.

What is meconium plug syndrome?

Meconium ileus isn’t the only cause of intestinal obstruction. A condition known as meconium plug syndrome (MPS) can also cause blockages.

MPS is common in otherwise healthy babies and occurs in about 1 in 500 births.

Although similar to meconium ileus, meconium plug syndrome is a different condition.

MPS affects a different part of the bowel, the colon, or the large intestine. MI affects the ileum or small intestine.

Meconium plug can happen in babies who have small left colon syndrome, where the last part of the colon is smaller than usual. Unlike in MI, the meconium is of a normal consistency in MPS.

In many cases, meconium plug syndrome has no known cause. It occurs more often, however, in babies whose mothers have diabetes or gestational diabetes (GDM).

It also seems more likely to happen in newborns whose mothers receive magnesium sulfate as a treatment for preeclampsia or for preterm labor.

Some babies with meconium ileus turn out to have Hirschsprung disease. This is a birth defect where babies are born without certain nerve cells in a part of the bowel.

The symptoms of Hirschsprung disease are very similar to those of MI: the delayed passage of meconium, green vomit, and a swollen belly.

Usually, the nerve cells help to move waste through the bowel. This process is called peristalsis and is the wave-like motion of the muscular lining of the intestines, controlled by the nervous system.

The lack of these nerve cells in the bowel means the muscles lose their ability to move stool through the intestines. This causes waste to build up in the small or large intestines, eventually creating an obstruction.

Treatment for Hirschsprung disease involves surgery to remove the affected section of the bowel.

Babies with meconium ileus are at a higher risk of developing conditions affecting the liver.

If they need bowel surgery, they’re more likely to have scar tissue and adhesions that can cause more blockages or constipation. This can mean more surgery for the child later on.

However, both surgical and non-surgical treatments are improving all the time.

Babies with meconium ileus (both simple and complex) do much better. Survival rates are around 80% with proper, timely treatment.

When to seek medical advice

If your baby develops any of the symptoms discussed in this article, contact your care provider immediately.

Any cause of intestinal obstruction is serious and requires immediate attention. If left untreated, infants with meconium ileus can quickly become seriously ill.

It’s important to seek help as soon as possible. There can be numerous causes for bowel obstruction, but early treatment will improve the outcome for your child.

How To Make Breast Milk Soap

Is Bending Down Bad When Pregnant?

Sarah is a registered Midwife, childbirth educator and trainer, blogger and proud mum based in Devon, UK. With over a decade of experience both in the UK and the USA, she is passionate about empowering women and their partners to make informed decisions about their care, helping them to feel positive and excited about their upcoming experience.

Is Bending Down Bad When Pregnant?