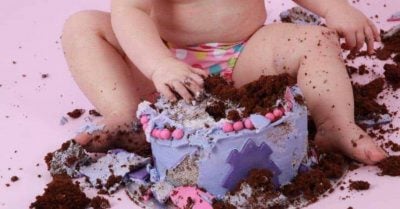 There’s something really adorable about smash cake photos, you can’t help but smile seeing a baby squish and squash a beautifully decorated cake.

Originating from the US, a cake smash is traditionally done just before a baby turns one, and the gorgeous images are used on the birthday invitations.

However, there are no hard and fast rules — we planned a cake smash on the day of our daughter’s first birthday, to add to the fun of the days celebrations.

We all had an absolute ball, but a cake smash definitely does require some planning and forethought!

You have a few options — you could do your smash cake:

We chose to do the cake smash at home, with a great photographer to capture the event for us — it was extra special as she was also our birth photographer.

Before I get into more information, here is the outcome so you can see what can be achieved at home. We were blown away at how well it all turned out, as was the photographer!

As you can see, they look gorgeous! You’d never have guessed we did it all from home, and it didn’t cost much at all.

Its really easy and inexpensive to make your own smash cake. You could always purchase a cheapie from the shop, or even get one made for you, but if you want to save money its very doable.

Just so you know: writing about birth and babies is my thing — I am not a domestic goddess! I have no special baking skills. So if you’d like to know an easy way to make a smash cake, here’s how we did it!

Firstly, we purchased a jumbo cupcake tin from eBay, which looks like this:

As you can see, it consists of a top and bottom piece, so you bake both halves and put them together when cooked.

We used three cheap buttercake packet mixes to make it — there’s no need to use any special ingredients as its only going to be mashed and smashed!

Cooking the cake is probably the trickiest part of the whole process because you need to carefully time the baking. The top part of the cupcake will cook quicker — so as per instructions that came with the mould, we poured half of the bottom mould’s designated cake batter (1.5 cups) into the bottom mould, and cooked it for half the recommended time on the packet (20 minutes in this case).

When the cake is done, let it sit for 15 minutes to cool and place on a cooling rack. You can straighten any sides with a bread knife, so you have flat surfaces to join together.

You should then have something that looks like this:

You can then decorate it however you please. We did a little bit of research by googling smash cakes and watching Youtube clips on how to decorate jumbo cupcakes. We were limited with time and resources, because we decided to do a cake smash late in the piece, but here’s what we managed to accomplish — our very first time making and decorating a jumbo cupcake (or a cake other than with standard icing!):

To achieve this look, we used cocoa powder to get brown icing on the bottom, and ready made french vanilla icing on the top. We bought the icing from the supermarket, as we knew we’d get a nice thick mix which was really white, for the contrast of the sprinkles. Using a piping bag (for the very first time!), my partner simply went along the cake and made the little stars all the way around it.

A good tip is to smooth icing on first so you get complete coverage over the top of the cupcake, then do the stars, swirls or whatever you’d like. The ribbon was a last minute dash to the cheapie shop late on a Saturday afternoon — really there isn’t anything overly special about it.

You also need to think about some sort of plate or stand for the cake. We didn’t — we completely forgot. Luckily, we were able to get inspiration from a baking dish turned upside down. It was white and nice and heavy.

Again, this all came together as a result of researching what we liked online, taking note of every little detail and seeing what looked good together — backgrounds, props, colours, clothing/costume ideas, accessories and more.

There are some gorgeous pictures at the end of this article to give you some inspiration and you can google and find loads of smash cake photos to give you all the inspiration you need. Just like the cake, it was so simple and cheap to put together ourselves. We purchased:

We had a few standby and back-up props like a pink boa, headband, streamers, and other random things, but it all happens so quickly and there’s so much mess that you really don’t go through many other items — just the ones you have at the time. We gave her a dessert spoon in the middle of the shoot and it came out so cute! You could use a wooden spoon or some other utensil safe for a bub.

The photographer happened to have a few things too which we used. She brought the white backdrop which was not as big as it looks in the photo, and the flags you can see in the background, which put the finishing touches in place. We then popped bub down with the cake was placed between her legs on an upside down ceramic cooking bowl (we ran out of time to find a cake stand but it worked really well!).

Don’t be surprised if your bub seems a little hesitant to smash up the cake. It can be a new experience that they are unsure of, so give them time to warm up. I ended up putting a little icing on my daughter’s cheeks and cutting into the cake before she really got her hands into it. Babies of this age love to squish things in their hand, so giving them a bit to play with can help too. We had a silly sing along of her favourite songs to get her smiling and she just had fun after that. Its great watching the whole event unfold as you have no idea what they’re going to do!

Smash Cake – The Clean Up

This can get really, really messy. Especially on the day of their birthday you need to allow for big clean-up time! I picked my daughter up and got covered in icing myself, so it was a bigger mess than expected! Its a great idea if you can get towels, a nappy, fresh clothes and everything else you’ll need, ready to go for the clean up. Running around trying to sort it out when you’re both covered in icing is no fun.

Because we had a drop sheet, the clean up at home was very easy, although some balloons ended up covered in icing too and dragged icing onto the tiles and other clothes after the clean up. So check over everything and save yourself stress later!

A beautiful idea for even more photos after the shoot is to have a tub bubble bath for your bub — a clean-up and photo shoot all in one!

Here’s some more gorgeous smash cake inspiration for you!

Do your research, see what you like, and design a smash cake shoot full of memories and fun.

If you have any smash cake photos you’d like to share with others, email them to us at info@bellybelly.com.au and we might include it in this article!

5 Sleep Options For Your Baby – Where Will Your Baby Sleep?