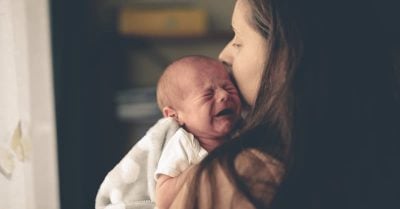 Any new parent would enthusiastically hand over bucketloads of their hard earned money, in exchange for the secret to ease their baby’s tears.

But how would you feel if you knew two significant factors in reducing a baby’s crying were absolutely free – and even enjoyable?

No parent likes to hear their baby cry. When you’re unable to soothe your baby’s crying spells, it can be heartbreaking and confidence eroding.

But, all is not lost. Because as it turns out, one thing many parents have been avoiding (usually because they feel they must do things the “popular” way) is one of the very things that has been proven to reduce crying.

So what is it?

It’s something that you likely already feel, even if your brain is telling you that you don’t know it.

Many parents try to shove down their feelings of despair when they embark on ‘cry it out’ routines. This is why so many parents find it so difficult to continue with such routines. And according to polls, it’s not a successful long term solution for most babies either.

Long ago, maternal responsiveness was proven to be the most powerful solution to a baby’s crying.

A longitudinal study (meaning the study was undertaken over a long period of time, in order to see longer-term results) from John Hopkins Hospital included 26 infant-mother pairs. They found that consistency and promptness of maternal response was associated with a decline in frequency and duration of infant crying.

“By the end of the first year, individual differences in crying reflect the history of maternal responsiveness rather than constitutional differences in infant irritability. Close physical contact is the most frequent maternal intervention and the most effective in terminating crying. Nevertheless, maternal effectiveness in terminating crying was found to be less powerful than promptness of response in reducing crying in subsequent months.”

They continue, “Evidence suggests that whereas crying is expressive at first, it can later be a mode of communication directed specifically toward the mother. The development of non-crying modes of communication, as well as a decline in crying, is associated with maternal responsiveness to infant signals. The findings are discussed in an evolutionary context, and with reference to the popular belief that to respond to his cries ‘spoils’ a baby.”

While the study was small and dates back to the 1970s, it’s important to understand that babies needs have not changed. We have greatly evolved and progressed as a society, but the developmental and physiological needs of an infant have not changed.

Newborns are not high-tech cyborgs, nor will they ever be. They are the same newborns they always were, being born into a fast-paced and demanding society which wears independence like a badge of honor. Interdependence is where it’s at. We need each other.

While there will always be naysayers to dismiss the size and age of the study, there has been plenty of research since, which pieces this all together.

We know when babies are left to cry, their little brains are flooded with cortisol, the stress hormone. Even after baby stops crying, cortisol remains high in the brain (see more in our article on sleep training), indicating baby is still stressed after the event.

The world’s leading experts and researchers in baby sleep are unanimous: leaving a baby to cry it out is damaging and inappropriate for babies.

Babies aren’t actually manipulating their parents when they cry. They’re in genuine distress. Until around 6 months of age, they don’t even realize they are a separate being – they think mother and baby are still one. And who can blame them, because mother and baby were at one, for nine long, cozy months. Being born doesn’t mean they suddenly understand they must function alone or individually.

Read more about this in our article about The Fourth Trimester.

A parent’s responsiveness helps their baby to learn emotional regulation. What this means is your baby will develop the ability to understand that we have control over our emotions. By comforting your baby, you’re teaching her that when she is upset, she can calm down. Babies who are not responded to do not learn the same thing.

We also now know that ‘crying it out’ doesn’t result in learning how to sleep, but learning how to give up… because help isn’t coming. So, it’s time to promote instinct, not isolation. Especially when you hear that the second thing is:

A study published in the Pediatrics journal, found that babies who are worn cried a significant deal less, especially during peak periods of fussiness. They found:

“At the time of peak crying (6 weeks of age), infants who received supplemental carrying cried and fussed 43% less overall, and 51% less during the evening hours (4 PM to midnight). Similar but smaller decreases occurred at 4, 8, and 12 weeks of age.”

That is a highly significant finding. If you’ve not already raced off to go and buy a baby carrier, keep reading, because there’s more yet. They concluded:

“We conclude that supplemental carrying modifies “normal” crying by reducing the duration and altering the typical pattern of crying and fussing in the first 3 months of life. The relative lack of carrying in our society may predispose to crying and colic in normal infants.”

So, perhaps we’ve been led astray in society’s pursuits for faster, better, more convenient, and most efficient. Because it seems the best way to help our crying babies is to slow it down, respond to their needs, and wear them close.

Unfortunately, old thinking results in many new parents being told they will make a rod for their own back if they wear their babies and respond to them. However, the opposite is true. Babywearing fosters secure attachments, resulting in confident, self-assured little people who feel safe. They know their basic, human needs will be met – they don’t need to fret for them.

There’s no magic potion that can take all of your baby’s tears away. After all, crying is simply their only way of communicating. We need to be troubleshooters, so we can work out what they need. Silencing all of their cries would be akin to telling them not to let us know if they need help. Who’d want to change those gorgeous little babies anyway? Even though sometimes — okay, often — it’s hard in the depths of sleep deprivation, giving our babies what they need, without believing they are manipulating us, will always be the true answer.

Recommended Reading: Sleep Training – 6 Things To Consider Before You Do It and Cry It Out – 6 Educated Professionals Who Advise Against It.