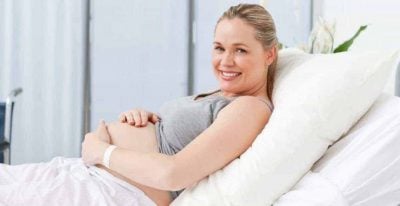 If you’re planning a hospital birth, there are several things you need to think about before you give birth.

Being as informed as possible during pregnancy gives you an extra edge during labour.

It helps you make the best decisions for you and your baby on the day.

Here are some of the most common procedures and policies you will face in hospital.

If you want to avoid any of these procedures, you need to make sure your care provider and birth support know upfront.

Procedures To Reject During Labour

Here are 8 procedures you may want to reject during labour:

Induction is the process of starting labour artificially, before it has begun on its own. If your health, or that of your baby, will be at risk if the pregnancy continues, inducing labour might be the best option available to you.

However, about 25% of all inductions are elective, or not medically necessary. Inductions might be done for reasons of convenience, if the pregnancy has reached almost 42 weeks, in cases of maternal discomfort, or for care provider preference.

Induction has many risks, depending on the method used. Risks include: babies being born too early (premature); fetal distress; increased interventions; and c-section.

Find out more about natural labour versus induced labour – there are 6 main differences.

#2: C-section For A Low Risk Pregnancy

Like inductions, c-sections in medical emergencies can be life-saving. Yet worldwide, many high-income countries have c-section rates double the recommended figure of 10-15%, set by the World Health Organisation.

The safest way to give birth for a low risk mother and her baby is vaginally. Women who have healthy, uncomplicated pregnancies should be supported to avoid interventions and procedures – including many of the procedures listed here – which increase the risk of c-section.

C-section is major surgery. It comes with many risk factors, not only during and immediately after the surgery, but for future pregnancies and births.

Read more about the difference between vaginal and c-section birth.

Depending on where they live, many women who have a c-section are likely to be told any future births will be via c-section as well. The evidence, however, supports vaginal birth after c-section (VBAC) as being safe in most cases.

Most care providers now acknowledge VBAC as safe, yet many women find there are strict criteria attached to having a vaginal birth following a c-section. Other women are told it is not safe to try for a vaginal birth if they have had more than two previous c-sections.

Women who achieve a vaginal birth after previous c-sections often have a great sense of empowerment and emotional satisfaction. They are more likely to give birth vaginally in the future.

Vaginal examinations are among the most common procedures carried out during labour in a hospital setting.  Midwives will assess how dilated your cervix is, in an attempt to gauge how your labour is progressing.

Vaginal examinations can tell you what your cervix is doing at that moment, but can’t predict the speed you will dilate from that point on. Not only do vaginal exams increase the risk of infection, they are likely to lead to intervention.

You might decide to have one exam on admission and then none after that. You might opt for no exams at all, or as often as the midwives request. This procedure is optional and your informed consent should be obtained before an exam is performed.

Women labour effectively without having their cervix checked regularly. Your midwife should be able to assess how your labour is progressing by observing you and your contractions.

Find out more in our article about vaginal examination during labour.

If you are giving birth in a hospital setting, you will be hooked up to an electronic fetal monitor (EFM) every hour or so. This is to monitor your baby’s heart rate, and to look for any patterns which might indicate distress or possible complications.

If you are attached to an EFM you will be limited in movement and restricted to sitting or reclining on the bed. This can make contractions quite painful. It might also cause your baby to receive less oxygen, especially if you are reclining or lying down.

The weight of your baby and your uterus puts pressure on a major blood vessel, causing less oxygen flow to the placenta. Care providers can see this on the monitor, and might interpret it as fetal distress, in which case they will want to intervene.

Continuous EFM means you are hooked up to the monitor for the duration of your labour. Continuous monitoring increases your chance of having interventions such as forceps or vacuum, as well as c-section. Evidence shows the use of continuous monitoring doesn’t reduce the risk of fetal brain damage or death for the baby.

The alternative to EFM is for your care provider to monitor your baby, at regular intervals, using either a fetal stethoscope or a hand-held Doppler ultrasound device. This is called intermittent monitoring. It doesn’t require you to be restricted in movement or position during labour.

Read more in our article which contains everything you need to know about fetal monitoring.

Epidurals are the most common form of pain relief given to women in labour. An epidural places anaesthetic medication directly into the spinal canal. This allows women to remain awake during labour but they feel no pain.

Epidurals can have an impact on the length of labour. Studies have shown women with an epidural in place can take up to 2.5 hours longer to go through second stage, compared with women who do not have epidurals.

Choosing an epidural is a personal decision but it’s important to know the risks and benefits of this procedure before labour begins. If you decide to have one, try to avoid having one too early, so as to avoid interfering with the progress of your labour as far as possible.

Here’s everything you need to know about epidurals.

Whether it’s to induce or get labour moving along, having your waters broken (amniotomy) is another very common procedure in hospitals.

Your midwife will break your waters by inserting a small crochet hook-like instrument into your vagina and through your partially dilated cervix. The hook ruptures the bag of waters (amniotic sac).

The idea is that the hormones released when the sac ruptures will encourage labour to move along faster. Once the waters are released, the baby might also move down a bit and put pressure on the cervix.

Speeding up labour might seem like a great idea at the time. But there are risks to amniotomy, such as cord prolapse (when the umbilical cord slips out before the baby), infection, and fetal distress.

Your baby might not be in quite the right position for birth, and if the waters are released there is an increased likelihood of this malposition contributing to the slowing of labour, or even increased pain during contractions.

Find out more about artificial rupture of membranes.

Once your baby is born, the third stage begins. This is when the placenta and membranes sheer away from the uterus wall and are expelled.

In hospital settings it is common practice to give women an injection of artificial oxytocin as the baby is being born. This injection causes very strong contractions, forcing the uterus to clamp down and push out the placenta very quickly.

The idea behind this procedure (called active management of the third stage) is to minimise excessive bleeding after the placenta has been expelled. Actively managing the third stage usually means your baby’s cord will be clamped and cut immediately, rather than allowing it to stop pulsating on its own.

Your care provider might also use cord traction to remove the placenta. This increases the risk of more bleeding if the placenta hasn’t yet come away. The cord could also snap when pulled on, in which case you might need it to be removed manually.

If you wish to have a natural third stage, and wait for the placenta to come away, then you will need to make this clear to staff before the birth of your baby.

All procedures have risks and benefits. Being informed about them before labour begins goes a long way towards helping you to make the best decisions on the day.

Menstrual Cycle – Stages, Phases and What To Expect