Doctor Nails Reasons Behind 500% C-Section Increase Since The 70s 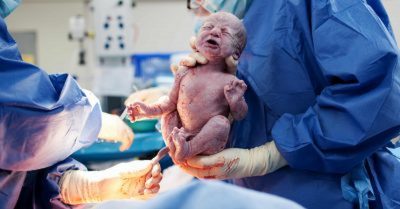 Mothers and their maternity care providers generally have the same goal: a healthy baby – and, of course, a healthy mother matters too.

To achieve that goal, a c-section is sometimes necessary.

But c-sections have been recorded in 50-70% of births, in both Australian and US hospitals. Could this high rate really be necessary?

Assistant Professor of Obstetrics, Gynecology and Reproductive Biology at Harvard School of Medicine, and Director of Delivery Decisions Initiative at Ariadne Labs, Doctor Neel Shah, has concentrated his efforts on pinpointing how the US c-section rate has skyrocketed by 500% since the 1970s.

It’s certainly a very important issue which we need to address urgently.

When genuinely necessary for mother or baby, the benefit of a c-section can outweigh the risks. Although c-sections can indeed save lives, however, the massive jump in birth interventions has not been associated with improved outcomes for mothers or babies.

In fact, c-sections account for higher morbidity (poor health) and mortality (death) for mothers and also carry risks for babies.

So why is it that today one out of every three births is a c-section, compared with one in twenty births in the 1970s?

Why Demographics Are Not The Cause Of Higher C-Section Rates

As a practising Ob/Gyn at Beth Israel Deaconess Medical Center, Doctor Shah certainly has the experience as well as the available research to explore this rise in surgical births.

On a Harvard School of Public Health podcast he recently shared the work he’s done to figure out the driving forces behind c-section rates, and what can be done to prevent unnecessary surgical birth.

When we first think of potential causes, we consider how our overall health has changed. Some popular theories that have surfaced over the years include:

While they might sound like realistic potential causes, Doctor Shah and other researchers have found they simply don’t explain this drastic rise in c-sections.

“When you look back at the 70s, you think, oh, the moms looked different… there is more obesity and hypertension and diabetes now. Moms are older than they used to be. Turns out all those demographic shifts actually explain surprisingly little. And the reason is that c-sections have gone up in 18-year-olds just as fast as they’ve gone up in 35-year-olds. And there’s still more 18-year-olds having babies than 35-year-olds. So demographics doesn’t really do it”, Shah explains.

In fact, it has very little to do with the birthing woman, but a lot to do with her birthing environment, as well as the hospital in which she’s birthing.

In 1900, less than 5% of US women gave birth in hospitals. When we look back to the 1970s, the idea of birth as a hospitalised medical event was still fairly new in the grand scheme of human history. In US history, just a few generations ago, most women gave birth at home in their beds. There were certainly no monitors, IVs, or exams every couple of hours.

Bringing birth into the hospital setting certainly brought the benefits of lifesaving medical procedures to those who needed them.

However, it also created a drastically different environment, which can have a significant impact on how birth unfolds and on the care a birthing woman receives.

Even in 1970, hospital rooms looked very different from those we see today.

Now, most delivery rooms look quite similar to ICU rooms. There are monitors and medical equipment everywhere, despite the fact that birthing women are most likely the healthiest patients in the entire hospital.

Hospitals are for sick people; yet (usually) healthy women come into that environment to give birth.

So what happens when we take healthy patients into an ICU-like space and their care is provided by surgeons?

Well, according to Doctor Shah, it can lead to a lot of surgery.

Perhaps one of the most surprising things, although it’s something many healthcare providers have discussed for years, is that continuous electronic fetal monitoring has never been shown to improve outcomes, despite its original design intent.

Even so, it continues to be used in the same way it has for decades, even though it’s only reliable in one thing: increasing c-section rates.

How Does Your Birth Location Affect Your Risk of C-Section?

When looking at overall c-section rates in the US, the difference between hospitals is astounding.

Some facilities have c-section rates as low as 7%, while in others the rates soar as high as 70%.

Don’t make the mistake of thinking this situation isn’t similar in Australia.

One Australian doula said this, of her experience three or four years ago, “I was at a private hospital in Perth and a midwife said it was the first vaginal birth she had ever seen at this specific hospital. She had been working there for four years.”

Walking into one hospital rather than another could mean a tenfold increase in your risk of a surgical birth.

Simply put, where you give birth might be the single most important factor when it comes to your risk of a surgical birth.

Some experts have speculated a higher c-section rate is due to financial concerns, the amount of money a hospital receives for a c-section versus a vaginal birth, or other incentives, such as fears about malpractice.

Direct financial concerns simply aren’t enough to account for a ten-fold increase in risk from one hospital to another.

“What is it about the hospital that makes it a big independent risk factor? And so we keyed in on the idea that management matters in health care and childbirth, just like it does in every other industry”. Shah went on to explain that just like in any other industry, management can have a drastic impact on how a facility runs and on its outcomes.

He shared his personal experience, which sheds light on why some providers, although well meaning, might even practise differently, depending on the facility they’re working in.

“I delivered babies at three Boston hospitals when I went from training to becoming a member of the faculty… So they’re within three miles of each other. They take care of pretty much the same patients. And I realised that it could feel like a lot more work for me to take care of the same patient, depending on which hospital I was in. And that was interesting to me. Because at the end of the day the c-section is like a rip cord. It’s like your way out. It’s your way out of the uncertainty. It’s your way out of the effort of trying to manage a complicated labour. And I thought maybe if there are certain places where it’s harder to take care of a patient, you might be more likely to do the c-section prematurely”.

When a maternity floor isn’t well managed in some areas, when there aren’t enough beds, when watching the clock becomes necessary, or when it’s simply harder to manage a longer labour, it could lead to doctors performing c-sections sooner than necessary, or even when it might not really be medically necessary at all.

Many researchers and public health officials have been working for years, trying to figure out why our c-section rates are so high and what can be done to reduce them. What Doctor Shah found was that perhaps we’ve been going about it all wrong.

The theory that the reasons for higher c-section rates lie in our overall health didn’t hold true. Certainly, our overall health can play a massive role in individual birthing experiences and risks, but as a whole, demographics just can’t explain this rise, or the drastic difference between facilities.

“I actually think that the C-section problem is due to unintentional errors, like so many of the errors we see in health care. Basically you can mess up two ways – by doing too little, and by doing too much. And so a lot of what we’re doing in the Delivery Decisions Initiative is trying to take that starting framework: what if people are doing too many C-sections but they’re not doing it on purpose?” Shah says.

With financial incentives being ruled out as a major cause, it led Doctor Shah to believe that perhaps this rise wasn’t due to intent. Perhaps it was a variety of factors like facility environment, management, and technology.

What Can I Do To Reduce My Risk Of An Unnecessary C-Section?

As mothers, we’re willing to do whatever is necessary to keep our babies safe. If we believed a c-section were necessary to do that, we would willingly undergo major surgery for their benefit.

However, what happens when a c-section isn’t medically necessary? We could be putting ourselves, our future pregnancies, and our future children at risk. Although a primary c-section is often uncomplicated, second, third, and later surgeries often carry much greater risk.

For this reason, this has now become a public health concern: to reduce the overall rate of primary c-sections.

As a birthing mother, you can reduce your risk by making informed decisions about your maternity care provider, making an informed choice about your birth location, and taking time to educate yourself so you’re able to ask questions and make birthing plans with your chosen provider.

Doctor Shah ended the discussion by saying, “I think it’s very important to have a clinician – of course, one that you feel comfortable with, you have a good relationship with, and you can assert your preferences with. There are so many things in pregnancy and childbirth that are legitimately preference sensitive. And, that being said, I think there’s a role for something like a birth plan, which is designed ultimately to do very similar things to a living will – just basically to express the mother’s preferences, and then get us in the health care world to dial it down a little bit”.

One US hospital was able to lower its c-section rate drastically. Read The Secret Weapon To These Doctors’ 12% C-Section Rate to learn more about how your birth location can be the most important prenatal decision you will make.

Meet Grace, The Toddler Who Has Never Eaten Sugar

Meet Grace, The Toddler Who Has Never Eaten Sugar