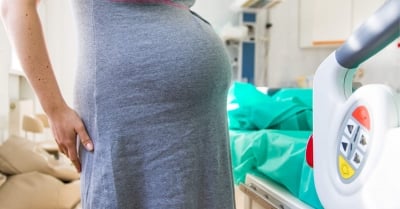 For most of human history, women were free to move about during labour. They were able to adopt upright positions that felt comfortable and eased the pain of contractions.

It wasn’t until the 1700s that lying down to give birth became the norm, thanks to obstetricians who wanted easier access for examinations. They also found it more convenient to perform procedures such as episiotomies or forceps deliveries.

Birth moved from home into hospital during the 1900s. The medical model of maternity care became entrenched in society, along with the expectation that women would labour on a bed. Flat on their back, and sometimes with their legs in stirrups. There was a complete lack of evidence to support this physiologically dysfunctional birthing position, which simply came down to doctor preference, and subsequently, how they were then trained.

However, there are plenty of reasons NOT to lie down while in labour, which is fully backed by evidence.

The significant advantages of giving birth upright are:

Why work harder than you need to? Your uterus contracts out — or forward — from your body. When you’re upright, you can work with gravity and your body’s natural functions in labour. When you’re lying down, you’re bearing the brunt of weight and force, which is going against gravity.

When you’re giving birth upright, making use of gravity and more effectively using your muscles, you’re less likely to need interventions such as forceps or episiotomies. When you’re working against gravity in dysfunctional position, both you and your baby are more likely to need help.

When you’re upright, leaning forward and working with gravity, your contractions will become much more efficient. If you’re lying on your back, your uterus will be contracting upwards, which is not working with your body, but against it.

When you’re off your back, you’ll experience less pain than you will giving birth lying down. This is because you have all the weight on your back and you’re working against gravity.

When you’re working with gravity, in a position that your body and baby is designed to work well, your labour will likely be much shorter. Although, it probably would be closer to “normal” — because lying down may slow your labour down.

#6: Better Oxygen Transfer To Your Baby

When you’re lying on your back, you’re bearing the full weight of the baby, your uterus, placenta and all that comes with it. Doing so puts pressure on important blood supplies in your own body. Compressing the blood supply also compresses the oxygen supply to your baby. By being upright, you’ll provide a better oxygen and blood supply to your baby. In turn, this means that your baby will be less likely to experience fetal distress. Fetal distress that cannot be rectified quickly usually results in a caesarean section.

Studies have shown that by giving birth upright, a mother’s overall satisfaction of her birth increases. And that’s no surprise given what we’ve already learnt – that an upright labour can result in a less painful labour, with less intervention likely, and so much more.

Lying down reduces pelvic diameter about 30%. Especially if you have concerns about having a big baby (which you shouldn’t be, because your body is cleverly designed to birth!), lying down is not going to help your body open as well as it could. Being upright opens up your pelvis, whereas lying down closes it up. This is why scans are inaccurate in diagnosing your pelvis’ ability to birth your baby.

#9: Lying Down Forces The Mother To Push “Uphill”

Pushing “uphill” against gravity can be ineffective and exhausting. Getting upright means you’re pushing “downhill” instead.

Now you know why giving birth upright is much more beneficial to mother and baby — so, what sort of positions are best?

Here are five birth positions that can promote effective contractions and an easier labour. Each of these positions can be used in the first and second stages of labour. Some positions may require the support of your partner, doula or midwife. It’s important to remember that you are the deciding factor in what is comfortable and works best for you.

Gravity works best in this position. Baby’s head is able to apply even and direct pressure onto the cervix, helping dilation. Contractions strengthen and become regular. In this position, the labouring mother can hold onto her birth support partner, rock and sway, lean against walls and so on. Slowly walking/swaying is a variation of this position.

Many women instinctively adopt the hands and knees position when in the later stages of first stage and pushing stage. This position is very adaptable and can include leaning forward over a birth ball or pile of cushions, or any handy piece of furniture like a table or bed. It allows for a full range of movement in your hips, such as rocking and swaying, which can increase comfort.

This position is also favoured by women who have back labour pain due to a posterior baby (baby is facing frontwards or his back against your back). Hands and knees positioning during posterior labour can help reduce back pain and promote baby’s head turning into a more favourable position.

Squatting doesn’t come naturally to women in Western cultures but it is a very powerful position to use when pushing. It’s a good idea to practice squatting during your pregnancy. Make sure you build up slowly, to avoid injuring yourself as well as getting your muscles familiar with the position. It’s not easy to balance when you have a bump out the front, so using a wall or holding onto a doorknob can provide you with the support you need.

Squatting opens the pelvis and increases the space for baby, while allowing gravity to help baby move down without much effort.

Some women find a lot of comfort and relief in sitting on a birth ball during labour. It allows them to rock and sway through the contractions. Sitting allows you to plant your feet wide apart and open up your hips, as well as taking pressure off your legs. Straddling a chair and using the back as support, or even sitting on your partner’s lap and leaning forward can be very comforting. The toilet can be a great place to be during labour, as it is a place where we feel comfortable releasing and letting go, which can help you to release and relax your pelvic floor muscles.

If you have had a long labour, being able to rest without discomfort is important. Side lying allows you to relax your body without increasing pressure on major blood vessels, which can compromise blood flow to your baby. If you have had an epidural or need constant fetal monitoring, lying on your left side can give you the benefits of an upright position. A fast birth can also benefit from side lying (or hands and knees), as it can help slow things down. It can also be a fantastic position to push baby out, particularly if you are tired and would need support being upright.