A women’s health service in California has come under fire for dumping a woman because she would not consent to a c-section.

In a letter to Stephanie Lyn Dobson, Trinity Women’s Health Service (TWHS) in California stated that she ‘went against medical advice and refused to do a scheduled cesarean section due to macrosomnia (sic)’.

Because of this refusal, TWHS opted to not treat Stephanie in the future, even though she was already in her third trimester. The letter sent to Ms Dobson was dated mid May, 6 weeks after she gave birth to her baby with another caregiver.

Aside from the very glaring error in the quoted sentence, there is also a glaring omission: actual diagnosis of fetal macrosomia (large baby over 4500g) is possible only once the baby is born and can be weighed. Before birth, macrosomia is suspected only.

Estimation of a baby’s weight while in utero is not easily done or very accurate. The main methods used to estimate a baby’s weight in utero are Leopold’s maneuvers (palpating the uterus/baby) and measuring the height of the fundus. Both of these methods can vary considerably, and used alone are not accurate predictors of fetal macrosomia. Ultrasound is another method to assess a baby’s estimated size but it is no more accurate than Leopold’s maneuvers.

TWHS boasts an all female team of obstetricians and gynaecologists, whose mission, according to their website, is ‘to provide our patients with the highest quality, technologically advanced, and comprehensive obstetric and gynecologic care.’

However, it seems that TWHS was not prepared to follow the clinical management guidelines of the American College of Obstetricians and Gynecologists (ACOG) regarding fetal macrosomia, which states:

“Labor and vaginal delivery are not contraindicated for women with estimated fetal weights up to 5,000g in the absence of maternal diabetes.”

ACOG goes on to state that studies have shown that it is safe for women to attempt a vaginal birth with an estimated fetal weight of more than 4kg. “Nonetheless, the results of these reports, along with published cost-effectiveness data, do not support prophylactic cesarean delivery for suspected fetal macrosomia with estimated weights of less than 5,000 g (11 lb), although some authors agree that cesarean delivery in these situations should be considered.”

The letter to Ms Dobson further pointed out that ‘Trinity Women’s Health Service takes patient compliance very seriously’. In the current birth climate, informed consent is a hot topic. More and more women are coming forward to report experiences of coercion and non-consensual procedures occurring during pregnancy and labour.

Ms Dobson’s right to refuse a c-section is in line with the current practice guidelines of ACOG, yet TWHS sees her informed refusal as not being compliant with their expectations of her treatment.

While doctors do have the right to dismiss patients from their care for a number of reasons, maternity patients are afforded certain protection against dismissal. According to the American Medical Associations Code of Ethics, doctors have an obligation to continue to support continuity of care for their patients. Women who are in their last trimester and within a few weeks of giving birth should not be dismissed from their doctor’s care unless under extreme circumstances (such as doctor illness).

Some supporters of TWHS believe they were within their rights to write to Ms Dobson, stating litigation prevention provides reasonable grounds to dismiss her from their care (the full letter from TWHS can be seen below). In 2012, ACOG’s Survey on Professional Liability revealed 58% of obstetricians change their practice due to fear of litigation.

In recommending Ms Dobson complies with an elective c-section against best practice guidelines, TWHS is practicing defensive medicine, exposing her and her baby to risk of injury and death. Ms Dobson has since vaginally birthed her baby, who was caught by a nurse just 30 minutes after arrival at the hospital. Her baby weighed 4.5kg (9lb 15oz). Hardly worthy of a c-section.

Since we’ve posted this article, we have been inundated with stories of the very same thing happening, in both the US and even Australia. From some of our fans:

“I was dumped by my care provider with my first born for refusing a c-section (I was 20 weeks!). Best thing that happened to me really as it led me to my amazing private midwife!” 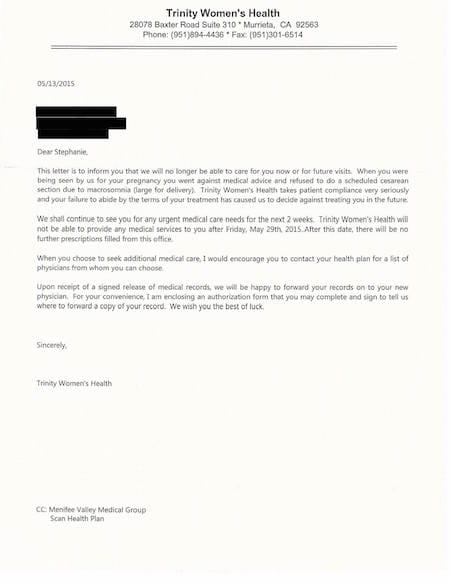 10 Thoughts Pregnant Women Have On Their Due Date

10 Thoughts Pregnant Women Have On Their Due Date