5 Ways To Reduce Your Chances of An Induction of Labour 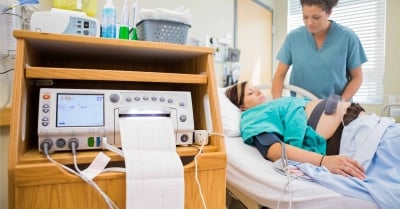 “I didn’t realize I was so close to giving birth, so we never left for the hospital. I kept waiting for the contractions to get as intense as last time (I was induced with my first). My second was an accidental home birth.”

Is the difference between a natural physiological birth and an induction that different?

For one mother-to-be, it was so different that she didn’t even realize she was in full blown labour with her second baby, after experiencing an induction with her first.

The more we learn about birth, the more we realise it is a normal physiological process that typically progresses without concern – when free of interventions that carry risks.

As we become more aware of the benefits of giving birth without interventions, more women are desiring to avoid an induction of labour.

Even with many women wanting to avoid an induction of labour, in some countries, 30-50% of birthing women receive Syntocinon or Pitocin (artificial oxytocin) administered via an intravenous drip. In Australia, we see an induction rate of over 26%. That’s over a quarter of births that are not starting naturally.

When medically necessary, an induction of labour can be a lifesaving procedure, and also one that allows a birthing woman the opportunity to attempt a vaginal birth.

For example, a mother with pre-eclampsia often needs to give birth before spontaneous labour begins. An induction provides the opportunity to give birth vaginally, rather than automatically requiring a c-section.

However, an induction of labour isn’t medically necessary for many of the women that begin labour this way. Generally, the benefits of an elective induction – meaning there isn’t a medical indication – do not outweigh the risks.

Why Are Induction Rates So High?

Induction rates can vary significantly from country to country and even hospital to hospital. If you’re in Australia, the US or another developed country, the induction rates in your area are likely higher than they need to be.

So, why are induction rates so high? There are multiple reasons, and some of those include:

What Are The Risks Of An Induction?

We hear about inductions often. With it being so common it is easy to assume an induction is a low risk procedure. While a woman can have a positive experience with an induction, they aren’t without. Sometimes even serious side effects occur.

One Australian study found that of induced women 26.6% had an instrumental assisted birth and 30.4% had a c-section birth. This means less than half gave birth without vacuum, forceps or surgery.

Risks associated with an induction:

Inductions are not without risk. There are benefits, when mama or baby are unwell and birth is necessary. Without a medical reason though, it is best to avoid an induction. Here are 5 ways to reduce your chance of an induction:

#1: Choose A Provider With A Low Induction Rate

Your midwife’s or doctor’s beliefs about birth will impact your prenatal and birth care.

If they don’t value and support normal physiological childbirth, you are more likely to be offered an induction of labour. They might assume you would prefer a scheduled birth — or perhaps they might prefer it — therefore, you might assume since a professional has offered it, it’s within your best interest to accept. After all, they are the expert, right?

A recent study in the US of 16,924 women who planned home births, they found that 89.1% of participants continued to give birth at home. Most of those who transferred to hospital were done so for failure to progress, and only 4.5% required synthetic oxytocin augmentation and/or epidural analgesia.

In the study, 1054 women were attempting a vaginal birth after c-section (VBAC), and 87% were successful.

The rate of spontaneous (non-induced) vaginal birth amongst participants was 93.6%, meaning only 6.4% of participants did not go into labour naturally.

As this study clearly demonstrates, low-risk women tend to experience high rates of normal physiological childbirth and low rates of intervention — without an increase in adverse outcomes.

If you need or prefer to see an obstetrician, read more about questions to ask an Ob/Gyn, to find out if they share your birth philosophy.

So often we hear, “You’re pregnant, you need to eat for two!”

Having uncontrolled gestational diabetes or borderline gestational diabetes can increase your risk of a big baby. If your doctor suspects a large baby, they are inclined to recommend an early induction before baby gets larger. The problem with this, there’s absolutely no way to accurately estimate baby’s size prior to birth.

However, if you have uncontrolled diabetes, with signs of a large baby, you are more likely to be induced. This in turn can increase your risk of a c-section, especially for first time mothers-to-be. One study found that elective induced labours had more than double the risk of c-section, compared to a spontaneous labour. If medication was used to ripen the cervix first, the risk was more than tripled.

We often assume if a doctor recommends a procedure it is because we need it, or because it is within our best interest to have it. Unfortunately, this isn’t always the case. If you are offered an induction the best thing to do is ask questions. Be sure you receive adequate information so you can consent or refuse the procedure.

You avoid making decisions based on false assumptions when you understand why an induction is being offered or recommended.

If your doctor suggests an induction and you don’t inquire further it is possible you will be induced without a medical reason. If you ask more questions, you might find out the only risk of not being induced is having a backup doctor attend your birth instead of your doctor; or you might find out that you have signs of pre-eclampsia and an induction really is necessary.

When you can make a fully informed decision you are more likely to avoid an unnecessary induction, or be confident in the necessity of an induction.

There are some medical conditions that necessitate regular ultrasounds to estimate the size of your baby. Generally though, routine growth scans are unnecessary and may even be risky.

Having regular scans at the end of your pregnancy might increase your risk of an induction if the scans are taken as an accurate estimate, and your baby appears large. An ultrasound during the third trimester isn’t extremely accurate in estimating the size of your baby. The weight and size estimates can be off by 10-15%.

#5: Remember That Due Dates Are Really Guess Dates

You might hear that the risk of stillbirth increases when you are post-term. While there is a slight increase, it is important to remember that you are not post-term until 42 weeks. Being 40 weeks and 1 day does not make you post-term.

Being pregnant often means you are making some big decisions. When you are offered an induction it can be difficult to know what the right decisions is. Choosing a midwife or doctor you trust, and insisting on informed consent can help you make the choice that is right for you.

If you are concerned about needing an induction, you might find this helpful:

Boy or Girl – What Am I Having? 16 Old Wives Tales