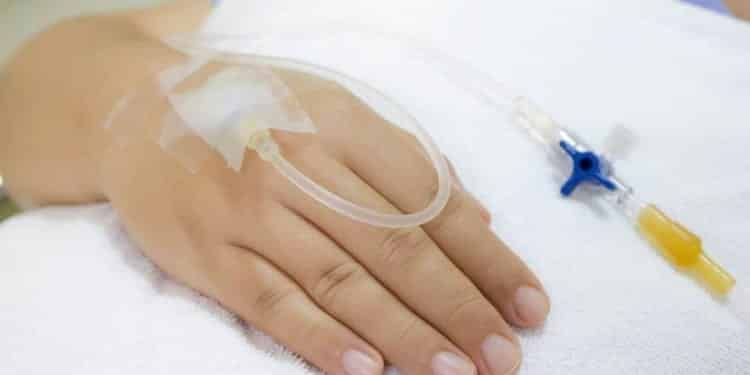 Your birth experience is heavily impacted by where you live, your maternity care provider and the location where you give birth.

One thing which varies between countries and care providers is the routine use of IV fluids during labor.

While it’s uncommon in Australia, if you’re in the US, chances are you associate IVs with giving birth.

You might not be keen on the idea, but it’s something you may be expecting as a routine policy.

After all, if it’s routine, there’s a good reason for it, right?

If you live in a country such as Australia, you might not plan on having an IV unless other interventions – like an epidural or induction of labour – are used.

So, if IVs are standard care in some places, does that mean they’re without negative side effects?

You might be surprised how something so seemingly innocent can have such a big impact.

Why Are Routine IVs Used During Labor?

When we work hard, we need to remain adequately hydrated. Drinking to thirst is often an appropriate way to ensure we remain hydrated during activities.

Despite the evidence that says otherwise, Some hospitals (many in the US) do not allow laboring women to eat or drink – they are assigned ‘NPO’, which means nothing by mouth.

If a woman isn’t eating or drinking for the duration of her labor, then a routine IV becomes beneficial. However, for a woman who is able to stay hydrated normally and does not have an epidural or other intervention, a routine IV isn’t an evidenced based procedure – it’s simply the result of an outdated policy.

The NPO policy is due to a fear that a woman might aspirate (inhale) stomach fluid while under general anesthesia during an emergency c-section. While this is a serious complication, it’s also extremely rare with just 7 incidences in 10 million births.

Despite NPO not being an evidenced based policy, it’s still quite common, and leads to routine IV use. Some studies have found that routine IV fluid is beneficial for NPO laboring women, but the studies don’t show a clear benefit for women able to stay hydrated by drinking. If anything, it seems to be a reflection of a culture that fears birth and doesn’t trust womens’ bodies. Birth is a part of the reproductive life cycle – yet we treat it as a minefield of a medical condition.

A woman in strong labour (i.e. not the early stages) will unlikely feel like eating anyway, but it’s important she has fluids for energy and hydration.

One study found women who were allowed to drink during labor and also had an IV, did have lower incidences of vomiting. While that is a benefit, is it a benefit that outweighs possible risks?

While hydration is essential during labor, routine IV use can lead to some negative side effects. Here are 4 negative effects:

While not so much a medical side effect, restricted movement can in fact impact your labor experience.

The birth process is dependent upon hormones which are better released when a laboring woman feels safe and comfortable.

Remaining active during labor has many benefits. While an IV doesn’t mean you’ll be strapped down, it can make position changes more difficult and your hand may be sore and dificult to flex normally. It may keep you in bed in a less than optimal birthing position, which can impact how your labor unfolds.

When women are given IV fluids during labor, they are often prescribed 100-200mLs per hour. If a woman has an epidural in place, she may be given even more to offset low blood pressure, a side effect of epidurals.

During a 20-hour labor, that’s 2-4 liters of IV fluid. This can cause painful swelling in extremities, and other parts of the body including the breasts.

Hydration is important, but hydrating beyond what our body needs – often accomplished by drinking to thirst – can have a negative impact that lasts for several days after the birth.

Your body already has extra fluid to naturally lose from the pregnancy, adding in an extra 2-4 liters can mean even more work for your body – and your poor post pregnancy bladder (which was likely working over time the last few months thanks to baby kicks).

Edema in the breasts can make it difficult for a newborn to properly latch onto the breast. It can also make breastfeeding more painful for the mother.

Difficulty latching can lead to a cascade of breastfeeding difficulties. If baby doesn’t latch well, the baby may need supplemented feeds. A poor latch doesn’t stimulate milk production like a proper latch does, then you add in baby receiving the supplement feeds and it can be a downward spiral to a delay in mature milk coming in.

Even if a mother tries to pump, the painful edema can make pumping rather difficult.

A recent study confirmed what many professionals had already suspected – when a mother has a lot of IV fluids during labor, her baby can later appear to lose too much weight.

The study authors conclude, “This suggests that intrapartum fluid administration can cause fetal volume expansion and greater fluid loss after birth, although other mechanisms are possible.”

This means when a mother receives IV fluid during labor, baby is also retaining some of the extra fluid. After the birth, baby will shed the excess fluid, making her weight loss look dramatic.

Excess weight loss often leads to supplementing feeds. In the study, 30% of the babies whose mothers intended to exclusively breastfeed received supplements.

Should I Have An IV During Labor?

When making decisions about your birth, it’s important to weigh up the pros and the cons.

For women able to stay orally hydrated, not having an epidural and not being induced or augmented, an IV may not be necessary.

There may be a reduced risk of vomiting, but that should be weighed with the risk of postnatal edema and possible feeding difficulties.

If a woman is unable to stay hydrated due to excessive nausea, vomiting or a strict NPO policy, or if she receives an epidural or has an induced/augmented labour, then an IV may be necessary and beneficial.

If you require or opt to use IV fluids during labor, knowing the possible side effects in advance can help you navigate feeding difficulties and be prepared for edema.