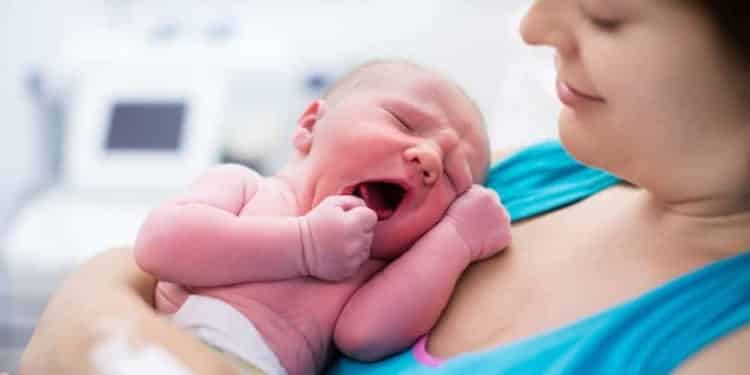 An increasing number of women who give birth via c-section are swabbing their newborn babies with their vaginal fluid.

The c-section babies had much lower levels and fewer types of beneficial bacteria than the vaginally born babies.

And further research suggests there is a possible link between birth method and future health.

C-sections babies were more likely to develop diseases in the future, such as obesity, diabetes and asthma.

What Is Seeding And Why Does It Matter?

It was thought that babies in utero were in a sterile environment, but it now appears that mothers transfer gut microbiota via the placenta. This places new emphasis on self-care during pregnancy to help promote good bacteria to pass onto your baby.

Did you know that stress, quality of your diet, medications and especially antibiotics can all affect your gut health?

When born vaginally, babies are exposed to friendly bacteria, such as Lactobacillus and Prevotella, which help us to break down sugars and carbohydrates in our gut.

C-section babies are more likely to be colonised by bacteria from the hospital environment, such as Staphylocci (staph infections) and Clostridium difficile (infections of the digestive system). C. difficile commonly affects people who have been treated with antibiotics, which are given to women before they have a c-section.

This is where vaginal swab seeding comes in.

The idea behind seeding is to mimic the effects of bacteria exposure during vaginal birth, by collecting vaginal fluids and then swabbing your baby’s face and body once they have been born by c-section.

While the effect is unlikely to be the same as a vaginal birth, it can increase the diversity of bacteria that your baby receives.

Why Does Bacteria Matter?

Humans depend on a vast number of microorganisms to stay alive. Our skin, gut, mouth and other parts of our bodies are teeming with microbes. They protect us against disease, help us to digest food, and produce vitamins. Our microbiome is essential to life and it begins with pregnancy and birth.

Beneficial bacteria passed from a mother to her baby helps to prime her newborn’s immune system. This priming helps the baby’s cells to recognise friendly and unfriendly bacteria and to develop immune responses to disease.

Mandana from Melbourne, Australia, decided she would seed her newborn after it became apparent her natural vaginal birth would end in a c-section.

“I had researched seeding as part of preparing my birth plan, as I wanted to keep everything as natural as possible if I needed a c-section,” she explains. “I was planning to birth at home, in my own environment, but my baby’s head wasn’t in the right position, so I had to transfer into hospital.”

Mandana knew that her baby wouldn’t be exposed to the right bacteria when he was born via c-section.

The consulting obstetrician had never heard of seeding but was happy to support Mandana in her choice. “Being able to do this helped me to feel that I owned my birth, and I was the one making the decision — even though it wasn’t the birth I had planned for,” Mandana says.

How To Seed Your Baby

While the research is still currently underway, the process to take a vaginal swab is quite simple.

A piece of gauze that has been soaked in sterile saline solution is rolled up similar to a tampon then inserted the mother’s vagina and left in place for up to an hour.

The swab is then removed prior to the c-section surgery and kept in a sterile container. Immediately after the baby is born, wipe the swab over your baby’s face, including mouth, nose and eyes, and then over baby’s body — which is similar to what they would have received during a vaginal birth.

When To Take The Swab

While the research is still ongoing, women are beginning to implement vaginal swabbing as a way of lowering their babies’ risk of poor health.

The difficulty with c-sections is they fall into two categories: planned (elective) and unplanned (emergency).

An elective c-section allows time to plan vaginal swabbing. If you are choosing to wait until you are in labour before your c-section you can still take a vaginal swab and keep it in a sterile container for after the procedure.

If you are having an induction, an epidural or continuous fetal monitoring, all of which increase your risk of c-section, then it is worth considering taking a swab during your labour and keeping it in a sterile container as a just in case measure.

An emergency c-section can mean less time to plan for vaginal swabbing, depending on how fast your baby needs to be born. You may have some time between making the decision to have a c-section and the surgery to take a swab.

If you can’t take a swab beforehand, you can still ensure your baby receives some beneficial bacteria via immediate skin to skin with you and breastfeeding.

You will be given antibiotics before surgery. When being prepared for having a catheter inserted into your bladder, your labia and vagina are swabbed with antibacterial solution. So it is important to make sure you remove the swab before surgery.

When Shouldn’t I Seed My Baby?

The risks of passing on the wrong sort of bacteria to your baby via vagina swab are the same as during vaginal birth. The studies looking into seeding tested women for viral, bacterial and fungal infections as well as HIV and GBS.

Being informed about your options is as important for both vaginal and c-section birth. Until further research is available regarding whether women who are screened for potentially harmful bacteria should be seeding their babies, it is best to proceed with caution and weigh your options carefully.

Will I Be Allowed To Seed My Baby?

Your midwife or doctor may not have heard about vaginal swabbing and seeding so you may find yourself educating them about it, starting with passing this article on for them to read. If you have chosen to include vaginal swabbing as part of your preferences for c-section, it is ultimately your choice.

Louise (not her real name) said she was aware of microbiome and seeding after watching the fascinating and informative documentary, MicroBirth, as well as being surrounded by women entrenched in birth, such as midwives and doulas.

Louise says, “I chose to do it in the event I had a c-section for a couple of reasons – to give myself more control over my birth, and to give my baby what I considered the best possible start on both a health level but also on a spiritual connection level as a baby born vaginally.”

When it became apparent clear that Louise’s baby would need to be born by c-section, she had her midwife insert the gauze swab. “The hospital staff was amazingly supportive, they asked questions about how it was done and why but never blinked an eyelid at it.”

Louise had her swab kept in a sterile container and her baby was swabbed immediately after birth, then kept skin to skin to increase the benefits of seeding.

It is important to remember that seeding should not be viewed as a way to replace vaginal birth. C-sections rates are increasing to the extent that the World Health Organisation has stated that c-section rates higher than 10% do not show any reductions in maternal and newborn mortality rates. This means in countries like Australia, the UK and the US whose rates are approaching or more than double 10%, the risks of the surgery are outweighing the benefits.

Research into the impact of how babies are born and the impact on their future health could be the path to reducing the most commonly performed surgery in the world, as we learn more about the long term impact of surgical birth.

How To Support Someone After A Miscarriage Or Loss

Centrelink Family Payments – 17 Payments You Might Be Entitled To