“Sorry, You’re Not In Labour…” How To Deal With Hearing These Words 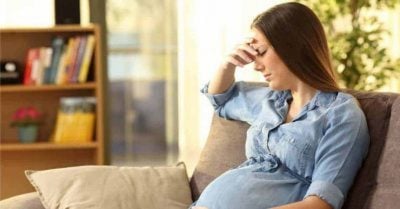 “Sorry, you’re not in labour.”

These are difficult words for birth attendants to say. It’s even right up there with, “I’m sorry, I’ve made a mistake.”

They are also very difficult words for the birthing woman to hear.

I’ve been on both the receiving and giving ends of those words.

During my first homebirth (second baby, 12 years after my first birth), I ‘laboured’ all day (5 minute apart sensations that I thought “really hurt”).

But at 8 p.m., my midwife performed a pelvic exam and said, “You’re only 3 centimetres (4 centimetres is usually considered active labour), you’re not in labour. I suggest you send all these people home, stop entertaining, go to bed, get some rest and I have to go help some other midwives at another birth.”

a) Wanting to kill her;
b) Knowing somewhere inside that she was right but not liking it, and;
c) Going into the bathroom and crying my heart out.

I did as she told me, went to bed and about midnight it swung into a whole different level of intensity. I could see what she meant that I hadn’t been actively having a baby during the day. I gave birth to my baby at 2 a.m. after about 4 hours of very high gear birth sensations.

What Did My Midwife Do For Me By “Giving It To Me Straight”?

At the time, I didn’t know that I would be attending births in my future but many of the things I learned from that birth now benefit the women I attend and those I teach.

I was watching a film of a three day marathon birth process. The birthing woman was having strong back to back sensations, feeling hot and in immense pain. She had a very good doula attending her plus her male partner. After three days of tiring birth process, she went to see her midwife at the birth centre and she was one centimetre dilated.

As I watched it (granted you can’t tell anything from a short film clip), I wondered if she might have scarring on the cervix from previous laser surgery. The other possibility is that she was scared to death and couldn’t dilate. At one centimetre she was given an epidural to get some rest and, the next day, ‘some manual help to get dilation going’ (breaking up scar tissue, perhaps?) and she went on to birth her baby vaginally.

In another example, I was asked to help out at a birth for a midwife’s daughter. The grandmother thought the birth was imminent and wanted me to come over and provide support, camera operation, and rested after care person. When I arrived, sure enough, the daughter was in high gear and I proceeded to boil up the instruments and get things ready for the birth. Between the highly intense sensations, the birthing woman said to me, “Gloria, I like your running shoes.”

At that moment, I realised that she wasn’t really in the birth process. If a woman is really having a baby, I could be naked and she wouldn’t notice. I think this birthing mother had seen so many birth videos in her childhood that she was acting out the whole scenario rather than experiencing it. Needless to say, it was another 48 hours before that baby was born. Telling my friend who is a very experienced midwife that her daughter wasn’t even close to having a baby was not easy but it had to be done. With our own family members it’s often difficult to be objective.

A VBAC (Vaginal Birth After C-Section) That Fooled Me

One of my VBAC clients called me to say she was having regular sensations. She seemed to be in the early stages of birth so I settled in to just wait it out. About 10 p.m. at night, things picked up dramatically so I decided to do a dilation check (this was 20 years ago). To my surprise and delight, she was seven centimetres dilated (that should have been a clue that I was making a mistake. When the external world doesn’t match the internal exam, check more carefully). I held her and massaged her all night long while the others slept.

By morning, everything had petered out and I couldn’t figure out why she wasn’t actively pushing by that time. She had been snoozing between her sensations through the night but I’d had her on the toilet, walking around, in the shower, etc. I did another exam only to realize, at that point, that I had completely blown it, she was only two centimetres dilated and wasn’t even in the birth process yet.

That was one of those awful moments when you have to say BOTH of the top two difficult things at once. I said, “Theresa, I’m sorry I’ve made a mistake. Last night when I checked you it wasn’t accurate. Right now, you are two centimetres dilated and you’re not in the birth process yet. I shouldn’t have been encouraging you all night that you’d be having the baby soon. Right now, the only way that this will work is if you’re willing to begin anew. Cancel everything we’ve done so far and get back to the very beginning. You need to eat, get some sleep, downplay this early stuff, relax. Everything is normal and healthy but I have made a huge blunder and I’m sorry.”

The worst thing I could have done in this situation is to lie to this woman and tell her that she had gone backwards in her dilation”yes, many practitioners do this. It’s so unfair to a woman who already thinks her body might fail her. Not only that, but I think somewhere in the woman’s own “knowing” place, she realizes that she has not really been in the birth process.

This amazing woman did begin anew. She and her husband forgave me for my mistake, rested, ate, relaxed, summoned their patience and had a home VBAC for their baby. I will be grateful to them forever.

Its Not Just a First Time Mother Thing…

Even though a woman has given birth before, each birth is different. We got a call from a woman who lives out in the country that she was in the birth process. Usually one attendant goes first to scope things out and the other gets called when the birth is close. In this case, I picked up my trusty partner, Mary, because it was a second baby and the drive was long.

When we arrived, the mother seemed to be having a lot of pain and I went into “we’re going to have a baby mode” getting the pool inflated and supplies ready. On one of my sprints through the kitchen, I noticed that Mary was sitting at the table reading. I said “What are you doing?, the baby’s coming.” Mary looked up and said “She’s not in labour, Gloria, you’d better check her before you get too excited.”

Ewwwwww! I hated hearing that, but, of course, she was right and I knew it even without checking. Her membranes were intact, so I suggested checking dilation and the woman was more than willing (another sign it’s very early). Sure enough, no dilation at all.

We reassured the birthing woman that things would get more intense and she definitely would have her baby. To give her and her husband some privacy, we went over to the local mall and told her to call us when the sensations picked up. She never called us so, after we’d spent all our money at the mall (only time I ever shop is when I’m waiting on babies), we drove home. She called back two weeks later and, this time, she was really in the birth process and pushed her baby out two hours after we arrived!

Check out our article, 8 Tips For A Low Stress Early Labour At Home and don’t forget to visit Gloria’s website.

Low Lying Placenta | What Does It Mean?

Low Lying Placenta | What Does It Mean?