For centuries, women have sought relief from the pain of childbirth.

Until the 1800s, most women gave birth at home, with the help of other women and the local midwife.

For the most part, women bore the pain of childbearing as part of their lot in life.

Anaesthesia during childbirth became more popular in the 1850s after Queen Victoria used ether during labour.

In those days, anaesthesia meant using whatever drug would bring unconsciousness, and the dose was however much it took to achieve it.

What is twilight sleep?

Twilight Sleep, or Dammerschlaf, as it was called by the German doctors who were using it in their clinic, was a drug which provided pain relief and also erased the memory of birth altogether.

How did twilight sleep become popular?

Originally, Twilight Sleep was met with scepticism and was not favoured by other physicians of the time, especially those in America.

The dangers and severe side effects of the drugs used were cited as reasons why it should not be used during childbirth.

Regardless, wealthy women travelled to the German clinic, attracted to the idea of ‘painless birth.’ Over time, the doctors who used it experimented, and refined their methods. The word got out, and in 1914, two American journalists went to Germany to report on it for a popular women’s magazine.

The article described the luxury provided at the clinic, the compassionate doctors and, most importantly, how women slept through the birth. It was presented as a miracle discovery. This happened at the time of the Suffragette movement, and it set in motion a call to action for the early feminists in America.

Women demanded the right to have twilight sleep

The National Twilight Sleep Association was formed, and began a concerted campaign, demanding that doctors in the US adopt the practice of Twilight Sleep during birth. The fact the drug had been rejected by American doctors for well over a decade was unimportant. Women were urged to rise up against the oppression of the male doctors who were withholding access to this miracle.

Society women and some prominent doctors took up the cause, and before long the pressure of demand began to have its way. Huge public pressure, and the potential loss of clients, caused many doctors to offer Twilight Sleep. Hospitals quickly put together special maternity units, catering to women who wanted the drug.

What drugs were used in twilight sleep?

Morphine is derived from opium. It was developed and first tested early in the 19th century, by a German pharmacist’s assistant. It acts on the central nervous system, causing pain relief.

Scopolamine is a compound derived from nightshade plants. It causes patients to fall into a semi-conscious state and experience amnesia (inability to recall recent events).

By using the right combination of these two drugs, women would fall asleep and wake up unable to remember anything about the birth. For them, it had been ‘pain-free’ because they had no memory of the birth.

What were the effects?

Not remembering the pain of labour doesn’t necessarily mean there was no pain at the time.

Scopolamine caused women to lose their inhibitions, and have no conscious awareness of what was happening to them. The small amount of morphine used didn’t prevent pain but contributed to women becoming uninhibited, and even psychotic.

Many women would thrash around, bang their heads on walls, claw at themselves or staff, and scream constantly. They would either be restrained on their beds, by their wrists and ankles or put into straight jackets. 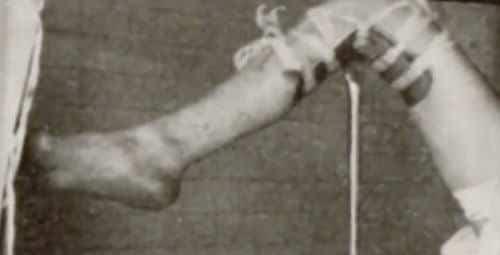 Often blinded by towels wrapped around their heads to prevent injury, they would be put into ‘labour cribs’ – cot-like beds that prevented them from falling to the floor. They would remain on the beds, bound and screaming, often lying in their own vomit and waste, for as long as it took for labour to end. 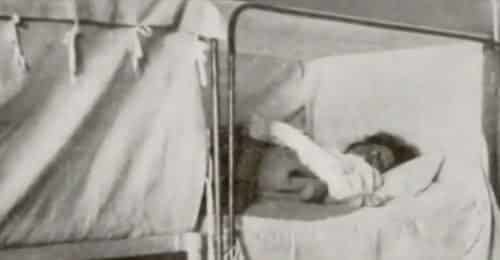 Babies were also significantly affected by the use of Twilight Sleep. The drugs would cross the placenta and depress their central nervous system. They would be born drugged, and unable to breathe normally. The commonly used image of babies being held upside down and slapped on the bottom comes from this time – when doctors would attempt to revive comatose newborn babies.

What happened in America?

The women who experienced Twilight Sleep in America probably didn’t have the same experience as the wealthy women who were treated in Germany.

The German clinic had many successes – mainly due to the refined treatment program in place. A wealthy woman could stay at the clinic for a month before she was due, so the staff could work out the right dose of scopolamine for her particular physiology.

When labour began, her doctor would stay with her, and monitor her from the first dose of Twilight Sleep, doing memory tests every 30 minutes, and adjusting the dosage, depending on her awareness of her surroundings. She would have coverings over the bed and wear dark glasses and even earplugs, to avoid overstimulation. Afterwards, the new mother would wake up with no memory of the birth, and would remain in her private room for a month.

This refined treatment protocol was rarely seen in any of the American hospitals. Doctors from the US would visit the German clinic, observe several births, then return to their practices at home. They were then regarded as  ‘Twilight Sleep trained’, despite there being a recommended 3-year course to learn the technique properly.

The sheer number of women demanding Twilight Sleep in America also caused many doctors to cut corners when implementing it and sank the arguments of those who were against the practice.

Doctors began to give the same set doses of Twilight Sleep to all women, rather than the personalised dosage given in the German clinic. Hospital nurses, who weren’t trained in the use of Twilight Sleep, observed the labouring women, and the doctor came in only when birth was imminent. Husbands were banned from the labour ward. Only medical staff witnessed the traumatic effects of the drug.

The end of an era

In 1915, a year after the craze for Twilight Sleep began, Francis Carmody, one of the most prominent supporters of the drug, died giving birth to her third baby while under the drug’s influence. Her doctor and her husband denied the drug caused her death, but the demand for the miracle ‘painless birth’ dwindled.

Even so, Twilight Sleep continued to be used on women well into the middle of the century, until women began to recall their experiences. Nurses and others who had witnessed the traumatic ‘painless births’ also spoke out, and an exposé was published in the popular Ladies Home Journal in 1958.

These shocking tales of delirium, and women harming themselves, caused the practice to fall out of favour. By the early 1970s, it was no longer routine for women to be anaesthetised to the point of unconsciousness, while their babies were forcibly removed from their bodies by forceps.

The natural birth movement was beginning, but the culture of birth had already been altered. Thanks to the advent of Twilight Sleep, birth was no longer the domain of women at home but had come under the control of hospitals and doctors.

Below is a short clip about twilight sleep, from the eye-opening documentary, The Business Of Being Born, which we HIGHLY recommend watching.

Recommended Reading: 10 Shocking Birth Practices From The Past. You might also like to read the book, Birth: The Surprising History of How We Are Born by Tina Cassidy.

Why Are Women Still Dying During Childbirth? Find Out What A Study Discovered

Breastfeeding May Protect Against Meningitis – Study

Breastfeeding May Protect Against Meningitis - Study