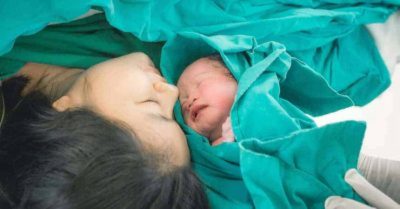 Most women hope and plan for a vaginal birth.

Today, however, in countries such as the UK, the US and Australia, between 20-30% of women give birth via c-section.

Why is this happening? After all, it’s a major surgical procedure that carries short and long term risks for mother and baby. Surely we wouldn’t be doing more c-sections than are medically necessary.

Unfortunately, research shows far too many c-section births are not necessary.

The World Health Organization (WHO) recommends a c-section rate of about 10%, and no more than 15%.

If we talk to women, it’s clear they do not want c-section birth.

There are many contributing factors as to why our c-section rate is so high. Perhaps the most shocking thing is that research shows us these factor clearly, and still we aren’t seeing any change.

What Is Causing High C-Section Rates?

Many factors. contribute to high c-section rates. One major factor is the frequent use of electronic fetal monitoring (EFM).

Today, continuous EFM is used in about 90% of births in the US. Surely it must be an evidence-based practice if 90% of births utilise it.

Unfortunately, it isn’t. Evidence shows EFM does not improve overall birth outcomes. In fact, evidence shows the only consistent outcome of using EFM in the general population is an increased risk of c-section birth.

There are certainly many other contributing factors related to our c-section rate. However, the steady increase in c-section births follows the increase of continuous EFM since the 1970s.

Many potential causes have been researched. Is our more litigious society and the risk of malpractice suits to blame? Is it due to women delaying pregnancy and birth until they are older? Could it be because of the decline in our overall health, especially the increase in obesity?

How Can EFM Increase The Risk Of A C-Section?

Jacqueline H. Wolf, Professor of the History of Medicine at Ohio University, and author of Cesarean Section: An American History of Risk, Technology, and Consequence, spoke with LA Times about a story a low-risk pregnant mother had shared with her:

“In other words, hers was a prototypical low-risk pregnancy. She felt great. Then a physician ruptured her amniotic sac, hastening labor.

“ ‘I went’, she told me years later, ‘from feeling nothing to being totally in excruciating pain’.

“A nurse attached her to what was then a relatively new device — an electronic fetal monitor. Physicians reviewed the monitor strip and told the mother she had to make a decision, and fast. ‘They said either that I would die, or my baby would die, or both of us would die, if I didn’t have a caesarean. They said her heart was in distress’ ”.

Without knowing the research behind EFM, this sounds like a situation where a birth went unexpectedly wrong and doctors were able to swoop in and save mother and baby.

As research shows, however, this scenario might not have been evidence-based. The first randomised controlled study on the device took place as early as 1976, and found a significantly increased risk of c-section birth with EFM use.

Perhaps the biggest take away wasn’t simply the increased risk of c-section but the lack of improved outcomes by using EFM and jumping to a c-section based on the monitoring.

According to the study, EFM use didn’t change birth outcomes. APGAR scores, stillbirths, neonatal intensive care unit admissions, mother and baby deaths, and rates of neurological disability were identical in both groups.

Based on research, continuous electronic monitoring did not improve outcomes for mothers and babies; it only increased the risk of a c-section birth.

The invention of the electronic fetal monitor was based on good intentions. At the time, it was believed that cerebral palsy, some intellectual disabilities and other difficult scenarios were often, if not always, the result of oxygen deprivation during birth.

Many physicians predicted the monitors would cut the rate of fetal death, cerebral palsy, and intellectual disabilities by half. With these predictions, the monitors weren’t even tested for outcomes before their release in 1969.

Around the time the monitors were first used, there was a decrease in perinatal mortality. However, the study in 1976 showed it probably wasn’t due to the use of EFM. During the same time period, maternal-fetal medicine and neonatology were also growing fields, and this could account for the reduction in perinatal deaths.

You can read more about this in The US Is The ‘Most Dangerous’ Country To Give Birth’, Investigation Finds.

With regard to the rates of cerebral palsy and intellectual disability, we’ve since learned very few cases are the result of oxygen deprivation during labour.  Although birth complications account for some cases, some sources cite only about 10% of cerebral palsy cases are related to birth.

The growing field of genetics and a better understanding of life in the womb have shown the majority of cerebral palsy and intellectual disability cases are the result of genetics or factors that occurred before labour (such as a stroke in utero). In these scenarios, neither EFM nor a c-section birth would change the outcomes.

There is no doubt in some situations EFM and c-section birth save lives and might protect an infant from experiencing asphyxia (perhaps in the case of uterine rupture or placental abruption). However, outside of high risk scenarios, we aren’t seeing improved outcomes by using high intervention.

Every intervention carries risk. When the benefit of an intervention doesn’t outweigh the potential risk, we expose mother and baby to unnecessary potential harm.

Even in the scenario shared by Wolf, perhaps the act of artificially rupturing the mother’s membranes (breaking her waters) became the catalyst for the cascade of intervention, along with EFM.

Why Do C-Section Rates Matter?

If c-sections occasionally save lives, why not always err on the side of caution?

This was the mindset when EFM first hit the scene. Rather than intermittent monitoring, physicians had the ability to watch a baby’s heart rate throughout the entire labour. While this seemed good in theory, evidence is now showing otherwise.

As we’ve learned over the decades since EFM became commonplace, fetal heart rates change, throughout labour, in response to contractions. Fetal distress was once a very rare diagnosis, but after EFM the rate of this diagnosis jumped significantly.

Wolf wrote, “Misinterpretations were common. Hospitals were seeing false positive rates for fetal hypoxia (lack of oxygen) of 40%. And doctors responded by erring on the side of caution, performing emergency caesareans”.

The problem with increasing c-sections ‘just in case’ is c-sections aren’t without risks. A c-section is a major abdominal surgery that carries the risk of infection, organ and tissue damage, pain, increased risk of clots, a future risk of placenta accrete, hemorrhage, and other short and long term risks.

For babies, a c-section birth carries the risk of a higher chance of a NICU admission, short and long term respiratory complications (including asthma), the possibility of being cut with the scalpel, as well as long term health problems related to disruptions in the colonisation of beneficial bacteria.

When a c-section is the safest option for mother and baby, the benefit of getting baby out quickly and safely outweighs the risks. However, in cases that aren’t medically necessary, we are exposing women and babies to too much risk.

Serious short and long term risks aside, what impact does a major surgery have on a new mother, who is expected to care for a completely dependent newborn?

In high risk situations, continuous monitoring might very well play a role. Evidence, however, doesn’t show that its use in 90% of births is beneficial; it certainly isn’t without risk.

Even the inventor of the monitor saw the connection between EFM and c-sections. Yale University obstetrician, Edward Hon, said his colleagues were “dropping the knife with each drop in fetal heart rate”.

Electronic fetal monitoring, like many things in modern obstetrics, was developed with good intentions in the hope of improving outcomes. However, when evidence suggests we aren’t using interventions properly, we need to reevaluate how things are being done.

An unnecessary c-section isn’t without risks. It isn’t a great ‘just in case’ solution. It isn’t best or evidence-based practice, and women and babies are carrying the risk.