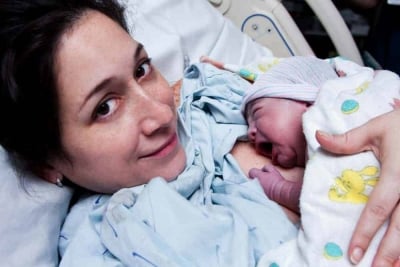 If you’re pregnant, you might be concerned about the position of your baby.

If they turn or remain in the breech position, you might be worried about the need for a c-section.

For many mothers expecting a breech baby, a c-section is often the only option presented.

However, a recent study which has just been released shows the risk of vaginal breech birth is low, and it should remain an option for women seeking it.

Breech position is present in 3 to 4% of pregnancies after 37 weeks. Currently, around 90% of breech babies are born via c-section.

The study analysis looked at more than 250 000 women globally to discover the mortality rate for babies from birth up to a week after birth.

The research discovered that the infant death rate was 1 in 300 for planned vaginal breech birth compared to 1 in 2000 in planned c-section.

What the study doesn’t take into account is the risk of maternal death being higher for c-section compared to vaginal birth.

However, they stated: “Although vaginal breech delivery is controversial, this review has shown low absolute risk.”

If breech birth was taught to obstetric and midwifery undergraduates, and if it were commonplace for birth professionals to have breech birth skills, perhaps we’d see even better outcomes for breech babies.

Vaginal breech birth began to be seen as problematic in the latter half of the 20th century, and the practice became extremely rare in maternity hospitals.

A large, randomised, multi-centre trial called the Term Breech Trial was undertaken in 2000, and supported the practice of planned c-section birth for breech babies. This quickly led to a change in hospital policy globally and ultimately the loss of skill and experience in vaginal breech birth in practitioners.

In 2012, a follow up study showed no long-term differences between planned c-section and planned vaginal breech birth groups, leading the study authors to conclude planned c-section does not lead to a reduction in the risk of death.

What Is Breech Positioning?

Babies have usually settled into a head down position by 36-37 weeks pregnancy, to make the most of the limited space in the uterus and in preparation for birth. Some babies don’t turn and are positioned to with their bottom or feet to be born first, known as breech positioning.

The concern for vaginal breech birth has been the possibility that the baby’s body can be born before the cervix is fully dilated. There is also an increased risk that the umbilical cord could be squeezed and compromise oxygen supply to the baby.

Certain breech positions are more suitable for vaginal birth than others. Yet many obstetricians will book women for an elective c-section for a breech baby regardless of position.

Frank (extended) breech is considered the most favorable breech position for vaginal birth. The baby’s feet are out of the way near the head and are less likely to come out first and bring the cord down. The baby’s bottom is also over the cervix, applying the sort of pressure the head would if the baby was head down, helping the cervix to dilate fully before the baby begins to descend into the birth canal.

Women seeking the opportunity to birth a breech baby vaginally may need to research caregivers outside their local area, as not all obstetricians have the experience, skill and belief in its safety to support a vaginal breech birth.

For vaginal breech birth to be an available option in maternity hospitals, there needs to be a significant number of staff who have received training in it. Vaginal breech birth safety can be affected by the skill of the supporting birth attendant, who should not intervene in the birth unless absolutely necessary. In today’s high intervention maternity culture, finding a ‘hands off the breech’ care giver can be a challenge.

If assistance is necessary during a vaginal breech birth, the care giver needs to be skilled and experienced to be able to assist in the right way without creating complications for mother and baby. In many hospitals, women attempting a vaginal breech birth are required to be lying down with continuous fetal monitoring in place, restricting movement and most likely interfering with the labour process.

All women should have the best available information and evidence based advice about breech positioning at term and the options available for their personal situation. If a doctor is unable to assist with a vaginal breech birth, this does not automatically mean a c-section. There is no one-size-fits-all approach, and every woman’s care during pregnancy and birth should be individualised to her personal circumstances.

The documentary ‘Heads Up’ has recently completed production. You can take a look at the trailer below, or rent it online here.

Antibiotics and Breastfeeding – 5 Things You Need To Know

Antibiotics and Breastfeeding – 5 Things You Need To Know