What Is The Real Risk Of Infection After Waters Break? 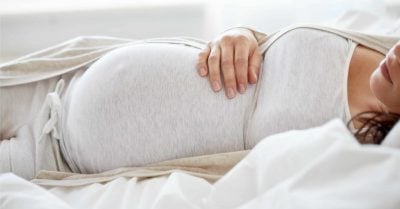 Your baby is protected and cushioned in the uterus by a fluid-filled bag called the amniotic sac.

This sac is made up of two layers of membranes, which act as a barrier to protect against bacteria that cause infections.

For most women the membranes rupture, and their waters ‘break’ at some point during active labour – usually during the first or second stage. There is little risk of infection at this stage because the amniotic fluid is flowing down and the birth of the baby usually follows soon after.

What Is The Real Risk Of Infection After Waters Break?

In an estimated 8-10% of births the amniotic sac ruptures before labour begins. This is known as premature rupture of membranes (PROM).

Women who experience PROM might find themselves feeling the pressure to go into labour as soon as possible because of the increased risk of infection.

If your waters break at full term before labour begins, one of the most important decisions you will face is whether to induce labour or wait for labour to start on its own.

What Happens After PROM?

Once the membranes rupture, the barrier protecting your baby from bacteria is no longer in place. This means you and your baby are not so well protected from potential infections.

There is a prevailing idea that labour must begin by 24 hours after PROM; otherwise an induction or c-section will become necessary.

The 24 hour rule began in the mid 20th century, when the mortality rate of babies was very high following PROM. In those days, women were not routinely given antibiotics for prolonged ruptured waters, nor were they advised to go to hospital if PROM had occurred.

These days most care providers allow a little more time before intervening, because they know that 75-95% of women will go into labour within 48 hours of PROM. Very few women will not be in labour after 96 hours.

The longer the time between the rupturing of the amniotic sac and the birth of the baby, the more likely it is you or your baby will develop an infection.

However it’s important to note the risk is not very high.

The risk of infection for the baby is about 2% (2 in every 100 babies) if you wait for labour to begin on its own.

The risk of infection for the baby is about 1% (1 in every 100 babies) if you are induced immediately.

The risk of the mother developing an infection can be reduced if she has been screened for Group B Streptococcus (GBS). A 2014 study found the overall rate of infection in women who had been screened and treated for GBS was 1.2% after PROM.

A number of studies showed infection risk to be higher in mothers who waited for labour instead of being induced after PROM. These studies didn’t take into account the number of vaginal exams given to women, or whether or not they had been screened and treated for GBS.

Women who are induced immediately after PROM tend to have fewer vaginal exams than those waiting for labour to begin. An exam is performed to check the cervix, in preparation for induction, and then routinely throughout labour.

Women who decide to wait for labour to start spontaneously following PROM are likely to have more vaginal exams before labour begins. The risk of infection increases in proportion to the number of vaginal exams a woman has.

Even if care providers use sterile gloves when performing vaginal exams, their fingers can push bacteria from the outside of the vagina up towards the cervix. Research has shown vaginal exams can almost double the number of bacteria at the cervix.

Experiencing membrane rupture before labour can be stressful. On the one hand, you might want to avoid any interventions and let things start on their own. On the other hand, waiting and worrying about your baby’s health can be very difficult.

Your care provider should give you all the evidence and information you need to make an informed choice about how to proceed with your care.

Although induction after PROM has been shown to decrease the risk of infection in both mothers and babies, the overall risk of infection is small. However, a mother’s risk for c-section is not reduced, and she might be less likely to feel satisfied with her birth experience afterwards.

If a mother wishes to wait for labour to begin spontaneously, she should be supported to do so safely.

The American College of Nurse Midwives’ Position Statement on PROM at term is women should be informed of the risks and benefits of induction, as opposed to waiting for labour. If they meet certain conditions, they should be supported in waiting for spontaneous labour.

If you decide to wait and see, or be induced following PROM, there are a several things you can do to reduce the chances that you or your baby will develop an infection

You might be advised to monitor your temperature every 4-6 hours while waiting for labour to begin. Contact your care provider immediately, if you experience any of the following:

Premature rupture of membranes before labour begins can occur in a small number of women, and doesn’t necessarily mean an automatic induction or c-section. Discuss your options with your care provider, and make sure you are supported in making the decision which best suits your particular situation.

Inspiring Mama Normalises Breastfeeding By Pumping During A Half Marathon

Inspiring Mama Normalises Breastfeeding By Pumping During A Half Marathon