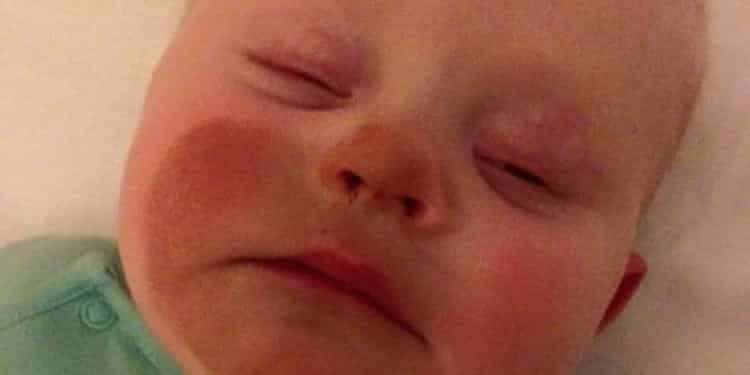 We’ve all had those days where we’ve done something silly as a parent.

With sleep deprivation and baby brain, it’s practically impossible to be alert at all times.

And so, mistakes happen. No big deal.

Whereas once upon a time these misdemeanours may have been a dirty secret, thanks to social media, they now go viral.

One Facebook page in particular has become a place where people can share their parenting misadventures and mistakes.

One UK mum, Gemma Colley, shared what she described as the “epic fail of fails” over on popular blogger The Unmumsy Mum’s Facebook page. The mum posted a photo of her son with a pretty impressively tanned mouth, thanks to a breast to face spray tan transfer. The photo very quickly went viral, attracting comments from around the world.

The Yorkshire mama had been for a spray tan at a nearby beauty salon earlier in the day. When it was time for her six month old son’s next feed, the spray tan was dry so Gemma assumed it would be safe. During the feed, however, some of the tanning lotion must have rubbed off onto her son’s face. He soon developed a boob shaped sun-kissed tan around his mouth and nose, leading to quite a hilarious photo.

The photo has been shared over 100,000 times on Facebook, with other mums sharing similar stories of accidentally fake tanning their babies. Other people, however, have not been quite so kind, with some commenters choosing to vilify this mama. The Facebook page owner even had to put out a request asking people to be kind to each other and keep offensive thoughts to themselves.

It may not be wise to cover your baby in self-tan, but it’s pretty clear that this was a one-off mistake. Gemma had the guts to own up to her mistake and warn other mothers to wait a while before breastfeeding their babies, and she deserves credit for that.

The mother returned to Facebook the next night to thank people for their support, and to share another photograph of her now tan-free baby. All’s well that ends well.

If you’re a social media obsessive, check out this article on the 13 Types Of Mothers You’ll Find On Social Media. Which one are you?

Vaginal Birth After Multiple C-Sections – Is It Safe?