Can You Get Pregnant On Your Period? The Facts 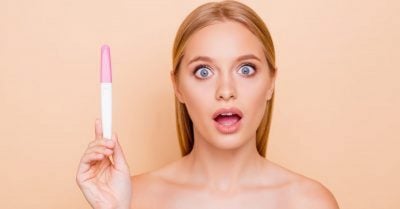 Whether or not you’re trying to get pregnant, it’s good to know when you’re fertile or not.

We often hear old wives’ tales about fertility, especially when we’re growing up.

So it can be difficult to know what’s actually true.

Some things we hear about the menstrual cycle are myths and not true at all.

One of the biggest questions is can you get pregnant on your period?

Some women stick with birth control and never get medical advice until they’re trying to conceive.

By this point, it can be difficult to search for the right answers.

So let’s look into it!

Can you get pregnant during your period?

It’s important to first understand how the menstrual cycle works.

There are a few different stages, and the stage you’re in determines whether you’re likely or not to get pregnant at the time of intercourse.

Let’s look at some of these stages:

If you don’t get pregnant, the final day of your luteal phase is day 28, followed immediately by day 1, your period.

Just remember, not all women have a 28-day cycle – that’s the average. So you need to adjust for your own cycle length.

Can you get pregnant right after your period?

As we can see in the list above, the fertility window comes immediately after menstruation. But there is some time between your period ending and when you ovulate.

Sperm can live for several days in ideal conditions. If you ovulate earlier than usual and had sex after your period, it’s possible to conceive.

Can you get pregnant on the last day of your period?

As we’ve seen, your fertile window is toward the middle of your cycle. Ovulation, when your ovary releases an egg, typically happens around day 14 if you have a 28-day cycle.

But every woman’s cycle is unique to her. Some women have longer periods than others and may ovulate only a few days after the last day of bleeding.

Knowing how their cycles work can give women the power of knowing when it’s safest to have intercourse without getting pregnant.

The key to this knowledge is knowing when you ovulate.

Chances of getting pregnant while on your period?

If your cycles are regular, it’s likely you ovulate around the same time every month.

Women can track ovulation with methods such as:

The feeling of ovulation is likely to be a pinching or cramping sensation. You may also experience light spotting. Many women notice increased vaginal discharge, that looks like egg white. You might also be more likely to want to have sex at this time.

If you have a shorter cycle, you’re likely to ovulate earlier in your cycle.

This means your ovulation day will be closer to the end of your menstruation and will give you a higher chance of getting pregnant if you have sex during your period.

If your cycle is longer, your egg is likely to be released later, and this gives you a lower chance of getting pregnant if you have sex on your period.

What are the chances of getting pregnant during your period?

When you know what day you usually ovulate, you know when your body is fertile, and becoming pregnant is more likely.

The chances of getting pregnant in the first days of your period are very low. But as each day passes, the chances increase, even though you’re still bleeding. This means you’re getting closer to ovulation and if you have sex and sperm survives long enough, you can conceive.

The closer to ovulation you have sex, the more likely you are to get pregnant.

Sperm can live in your reproductive system for up to five days.

That means if you have sex only one time in your cycle and you ovulate five days later, you can become pregnant.

If the egg and sperm meet during this time, you can become pregnant.

This is why it’s important to know how your cycles work.

How many days after your period are you fertile?

Dr Andrew Orr says there’s a “1-6% chance” of getting pregnant if you have sex on your period.

This is largely affected by your cycle.

The luteal phase (the time after you ovulate and before you start your period) is usually 14 days.

If you have a 28-day cycle, this means you probably ovulate on day 14.

As mentioned, sperm can live inside the woman’s body for up to five days.

This means in a typical cycle if sperm is inside the uterus five days before ovulation, she can get pregnant when she ovulates.

Many couples actually use this method to try to conceive a girl.

For a woman to get pregnant in this case, she would have to be menstruating on day nine.

It’s typical for menstruation to occur for five days each month. The average range is between 2-7 days.

However, a nine-day period is possible. In this case, it’s possible for a woman to have sex on her period and then get pregnant when she ovulates.

It’s important to know the number of days of your typical period and what number of your cycle you usually ovulate.

Can sperm survive in menstrual blood?

Sperm are able to survive in a woman’s reproductive system for around 5 days, regardless of whether she’s menstruating or not.

Period blood won’t do anything to stop sperm from moving up through the vagina and cervix toward the egg.

So if you do have sex during your period and don’t want to get pregnant, use a barrier method.

Can you get pregnant on the first day of your period?

It’s very important to be familiar with your cycle. Having sex right before your period is very unlikely to result in pregnancy.

Getting pregnant if you only have sex on the first day of your period is also almost impossible.

It becomes more likely the closer you get to your fertility window.

This is five days before ovulation and one day after (around 24 hours).

This is because when the ovary releases an egg, it lives for around one day before dying.

The more familiar you are with when you ovulate, the more able you are to avoid or achieve pregnancy, depending on what you’re trying to do.

Remember that some things can affect when you ovulate, possibly causing you to ovulate early.

If you’re trying to avoid pregnancy, barrier methods of birth control is always the best option and can give you more peace of mind.

It’s important to remember that any unprotected sex carries a chance of pregnancy.

Toddler Age Range | What Age Is Considered A Toddler?

Toddler Age Range | What Age Is Considered A Toddler?